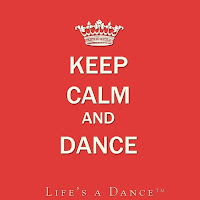 Last year's "Word of the Year" - with much gratitude, as always, to my beloved Leanne at From Chaos Comes Happiness for the inspiration to choose an annual theme and goal - was "Dance."

My intention was to dance as I baked, with tunes that are just fun - albeit, often cheesy or embarrassing! - infusing my kitchen and my food with happiness. I did this, somewhat, though I often had Jeremy and Craig around, as the former has lived primarily with me rather than with his dad and the latter spent long weekends with me. They like to watch t.v. (and, as musicians with semi-fried eardrums, they turn it up way too loud!), and they tease me - with affection, of course - about some of my questionable taste in music. (I have a far greater sense of humor about it than they do.) So, if I had the house to myself, I took full advantage of it and turned up the tunes and danced away. It didn't happen often, but I did enjoy it when it did.

On a less enthusiastic or entertaining note, I also continued the dance with the insidious devils of substance abuse and mental illness in loved ones. Trips to the ER, calls to the police, the search for stability ... but I've done these steps for a few decades, now, and I've perfected them; one might confuse me with Ginger Rogers, or presume I've spent some time at an Arthur Murray dance studio, given my fluidity and grace in these circumstances. While I never take sobriety or sanity for granted, the last half of 2013 has been remarkably stable and serene. Good health, serenity. My dance card was full, and it exhausted me to take so many turns 'round the dance floor, but I'm sitting and sipping some non-alcoholic punch now as I enjoy the chance to rest my feet.

There were also a couple of dances with death, as twice I was told that my father was close to it, his congestive heart failure trying hard to lead. But at 86, my father is still here. My 82-year-old mother - who overlapped with my father one day in the hospital, as each had a health issue to contend with - is still here, too. Death has retreated to wallflower status for the moment ... watching, but from a distance.

I danced through the year, continuing to write, to take care of others, to try to take care of myself, to take on new challenges (like my first gig as an emcee, for a Girl Scout event featuring both a bake-off and an auction). I had surgery on my shoulder, from which I'm still healing, which has restricted my ability to dance a bit - mostly, in recent weeks, I've been going to work, going to physical therapy, and sleeping. Healing is hard work.

What word to guide me, to lead me?

This year, it was hard. It usually comes to me in a flash of brilliance, the perfect notion, as though it was bashert [bah-SHAYRT] ... destiny.

But not this year. This time, my brain was clouded by pain, by stress, by trying to prepare for surgery on December 13 and to get things ready at work, at home, at The Ann Arbor News, on the blog, and everywhere else ahead of time. Nothing sounded right. Nothing fit.

But then it came. The word.

So often, I'm looking ahead toward posts to do, food holidays to prepare for ("celebrating" early in order to have a post ready for the day itself), feeling pressure from deadlines and obligations, trying to sort it all out and meet all my responsibilities rather than being HERE, in the moment. I'm always a day, a week, a month ahead.

But I'm determined to be here, now, in the moment - to stop my brain from spinning and planning, to focus on this experience, this place, this time. And since I thought of the word, it's even taken on new connotations.

Because I have big, big, BIG news to share: in the midst of surgery and holidays, I managed to get a new job in a new city.

I'm going to be the new Food Editor of The Toledo Blade, starting February 5!!!

Toledo is only an hour away from Ann Arbor, straight down 23. But it's not Ann Arbor. It's not even in Michigan, where I've lived since we moved from New York City in 1978. When I say "here," I'll be in a new place, completely unexpectedly. I was just seeking a quick gig to supplement having been cut back by The Ann Arbor News to one post/week from three. You never know what the universe plans for you! And, as my friend Nicole, of Destination Unknown, has posted on Facebook in the past, Coco Chanel had the perfect quote about this:

“I don't understand how a woman can leave the house without fixing herself up a little - if only out of politeness. And then, you never know, maybe that's the day she has a date with destiny. And it's best to be as pretty as possible for destiny.”

Six days after having a lot of work done on my shoulder - with three little scars and three little stitches, and unable to move my arm very much - I had a date with destiny. I put on a black sleeveless dress that I could step into (since I couldn't lift my left arm), one that zips up the back and wouldn't sit heavily on my still-bandaged self. I put on a purple cardigan, 'cause it was cold and 'cause I'm a colorful girl who tries to dress with some flair even when I'm toeing a fine line between needing meds but not wanting to drool on the potential new boss' desk. I put on my sparkliest earrings, a beautiful pair I'd bought for $2 at a rummage sale at Jeremy's old high school, and a gorgeous red wool coat with a black velvet collar.

And I danced with destiny.

I spent 5 hours chatting, asking and answering questions, and doing everything in my power to come back here - to Toledo, where I was being interviewed. Many people have suggested to me that this might be a stepping stone; I ask, instead, why it can't be a destination? Destiny.

And so, I considered choosing "destiny" as my word of the year, or perhaps bashert [bah-SHAYRT], the Hebrew version. But I think that "here" may be more appropriate.

For I will soon be here, referring to a new city when I say it. But a huge part of my heart will stay here in Ann Arbor, with Jeremy, especially. It will stay here with friends, with the synagogue I've worked at for the past 7 years with such wonderful people that the congregation is really a part of my extended family. Tony Bennett left his heart in San Francisco; I leave a piece of mine in the city I've lived in for 30 years. But all of these loved ones will be here with me, always, no matter where I am physically.

I have dozens of ideas for the food page, from social media to contests to holidays to food drives. I need to stay here, in the moment, focused. I need to be here, learning about a new city and its restaurants and markets and food banks and - most importantly - its people.

It's scary. I also considered choosing the word "ch-ch-ch-ch-changes" (just as David Bowie sings it) ... I debated this word, in this format, with its hesitation and fear of the unknown. But while I'm partly terrified, partly exhilarated, partly dumbfounded - a whole smorgasbord of mishigas [mish-ih-GAHS] and shpilkes [SHPIL-kiss] (great Yiddish words meaning "craziness" and "antsiness," respectively) - I don't want fear to particularly be a part of that mix. I'm nervous. I feel I can only disappoint, as everyone's expectations seem to be set so very high, although I'm really hoping to rejuvenate and invigorate the food page and invest in a relationship with readers.

But I'm going forward into a new year, a new city, a new home, a new job, a new life intending to be here, enjoying and appreciating all of it!

On Saturday, as the moving truck and Craig and I cross the state line into Ohio, I'll say, "I'm here." And the adventure will begin ....