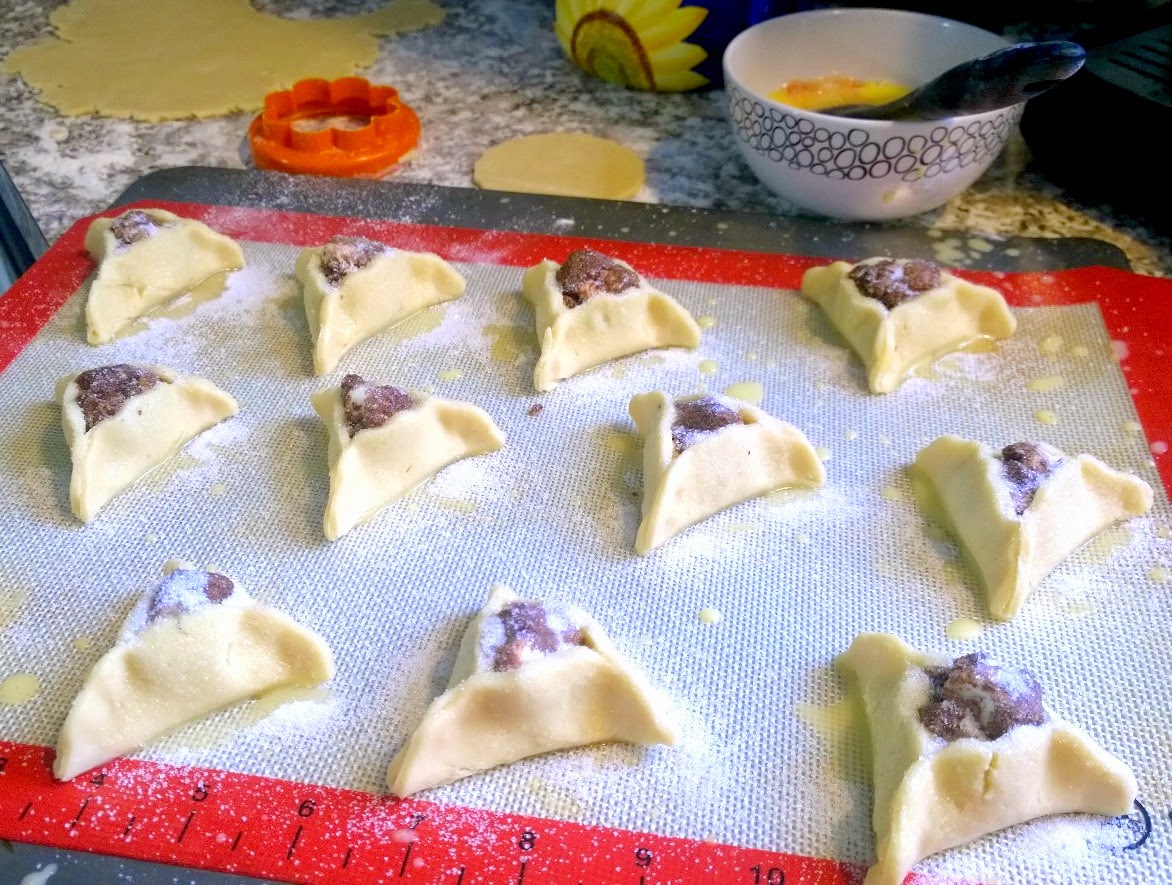 If it's Purim - which it will be at sundown on Wednesday - then it's time to make hamantaschen. A perfect weekend project!

Hamantaschen are the filled, triangular cookies that are a tradition for this holiday which celebrates the story of Queen Esther. Purim is the happiest day on the Jewish calendar.

Esther was married to King Asahuerus, whose evil Vizier, Haman, wanted to have the Jews killed. It wasn't known that Esther was Jewish, and she agonized over whether to risk death by telling her husband; she fasted and prayed. Her uncle Mordecai supported her, and Esther ultimately decided to inform the king that if he killed the Jews then he would be killing her, as well. In the end, the old Jewish adage proved true: They tried to kill us, we survived ... let's eat!

Because there was no kosher food in the king's court, Esther is said to have eaten seeds and nuts; therefore, it's traditional to cook with poppy seeds at Purim, in Esther's honor. The triangular hamantaschen - shaped to resemble the ears or the hat (or both) of the evil Haman - often contain a poppy seed filling. Others feel that prune, an Old World favorite, is the most authentic and their favorite.

And then others, like me, always have to tweak traditions.

So this year's flavors are my classic cherry, made with Balaton cherries that I pitted myself in July. And also a new one: s'mores. Yup - s'mores. Why didn't I do this before??? They don't look pretty, as the marshmallows puff up and push on the dough before melting, leaving it a bit distorted; but who cares how they look when they taste so good???

It's traditional to give mishloach manot [mish-loh-AHCK mah-NOHT] to loved ones - small goodie bags filled with hamantaschen and at least one other ready-to-eat treat. Many people add tea bags, candies, even stickers ... just something fun. And even more importantly, it's a mitzvah - commandment, good deed - to give money to the poor, as well. 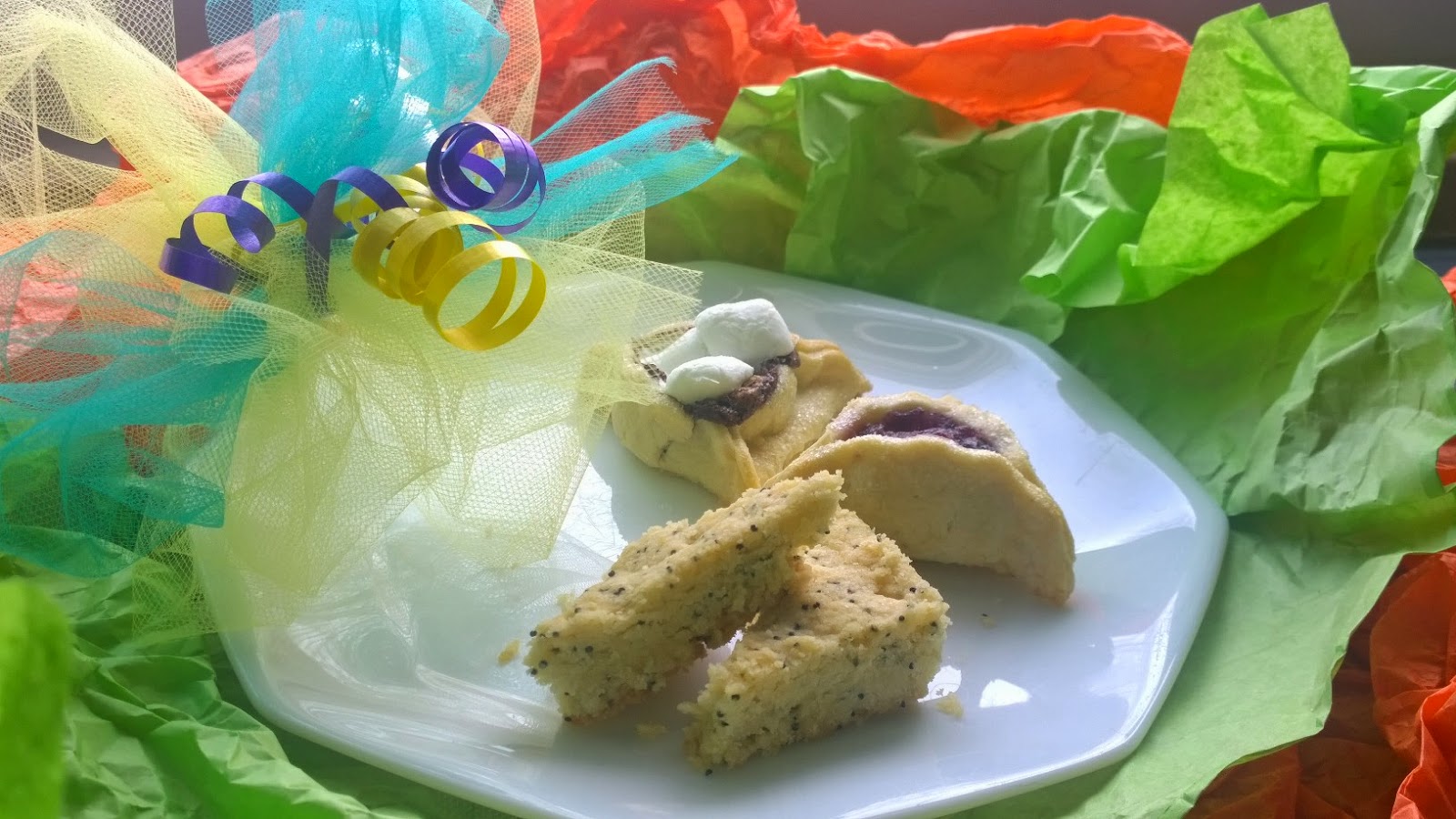 In a large bowl, cream together butter and cream cheese; stir in sugar. Stir in egg, vanilla, and salt until well combined. Stir in flour, and knead until the dough comes together.

Divide the dough in half and wrap each portion in plastic wrap. Refrigerate for 30 minutes.

Take one piece of dough at a time and roll it out thin (not paper thin) on a floured countertop. Using a 2-1/2" cookie cutter, cut out circles; place them onto a baking sheet lined with parchment or with silicone liners.

Mix together the egg and water to make a wash. Brush lightly onto one row of dough circles at a time (so the others don't dry out while you work on filling and shaping cookies). 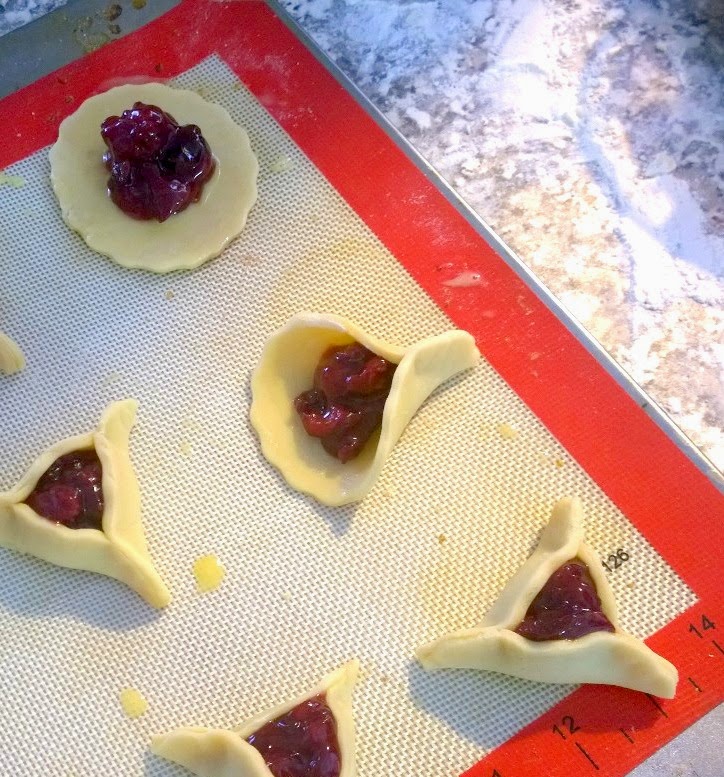 Take a scant tablespoon of chosen filling (see below) and place onto the center of one circle of dough. Fold two sides up and pinch them, to form a corner. Bring up the third side and pinch at the corners, forming a triangle. Repeat with more filling and the rest of the dough circles on the baking sheet.

When the cookies are filled and shaped, brush them lightly with egg wash and sprinkle with sugar. Bake for 20-25 minutes, until just golden at the edges. Remove to a rack to cool and continue with remaining dough and fillings.

If making s'mores hamantaschen, let the cookies cool; the fillings will sink, leaving a cavernous hole. Fill the hole with 3 mini marshmallows each, and place the cookies back on the cookie sheet. Bake at 350F for 5 minutes, just to burnish the marshmallows a bit and toast them very lightly. Remove to a rack and cool completely.

In a medium saucepan, melt the chocolate chips and the half-and-half over very low heat, stirring frequently, until smooth. Stir in the Fluff, marshmallows, and graham cracker crumbs.

In a small saucepan, combine all ingredients. Bring to a boil, stirring constantly. As soon as the mixture turns thick and gelatinous, remove from heat and stir until thickened. Place into a bowl, cover with plastic wrap, and refrigerate 30 minutes or until cool. 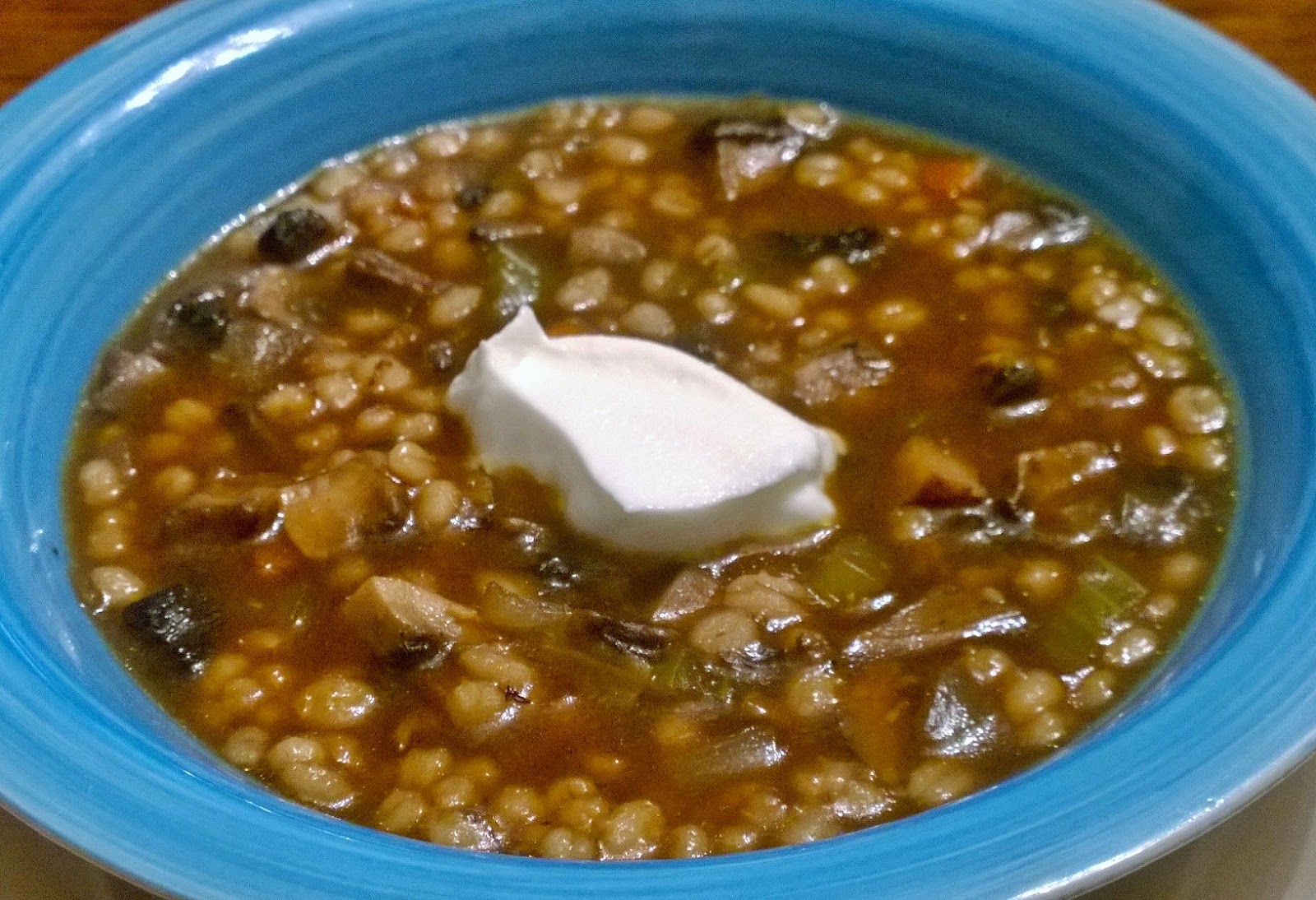 Tryin' to be a little more present, here on ye olde blog!

Here's some comfort food extraordinaire, perfect for a cold, winter's day. Spring is coming soon! But unfortunately, it's still not here.

So, warm yourselves with a hot, hearty helping of homemade ... soup. (No "h"-word for that, to keep up the alliteration!)

I'd never made Mushroom Barley Soup before, despite having eaten lots of it. It's so simple! It's so good!

Prepare barley: In a small saucepan, bring water and salt to a boil. Stir in barley, cover, lower heat to simmer, and cook for 45 minutes, until water is absorbed and barley is just tender.

Prepare soup: Heat oil over medium-high heat in a soup pot. Add garlic, carrot, celery, and onion; cook for 2 minutes, until vegetables are becoming translucent. Add all the mushrooms and the red pepper flakes; cook, stirring frequently, for 6-7 minutes until the mushrooms are browning.

Serve hot, with a dollop of sour cream stirred in.