Tomorrow is Hallowe'en, a feast and festival of candy. Whatever its pagan origins, it has evolved into merely a sugar rush and a chance to play dress-up. Have some fun with your food, even if - like me - you have no little ones to take Trick or Treating or even many kids in the neighborhood anymore to ring your doorbell. It's still a holiday, and you know we always celebrate holidays - religious, secular, literary, whatever! - here ... :) 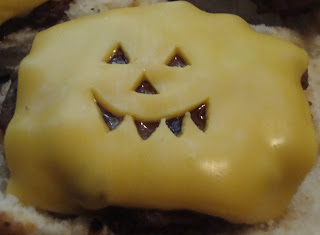 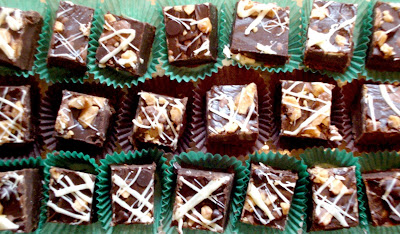 A treat for adults!

There are actually more than three kinds of chocolate in this fudge, but "Multiple Chocolate Toffee Fudge" didn't quite have the same panache. This obscenely decadent indulgence - which was a tremendous hit at a friend's recent potluck gathering - features milk chocolate, dark chocolate, white chocolate (technically not "chocolate," but ...), mini chocolate chips, chocolate frosting ... sigh. Rich and luscious, one or two pieces will definitely suffice; so it's great for a party, where everyone tastes a bit of this and a bit of that.

The recipe for this fudge is probably the easiest one I have, shared with me years ago by a friend. In its most basic form, there are only two ingredients: chocolate chips and chocolate frosting. No need for candy thermometers, no intimidating temperatures or stages to gauge. Melt together two ingredients, then let them set. Make it more festive as you see fit with add-ins and decorations: crushed cookies or pretzels, sprinkles, dried fruit, nuts, whatever.

Keep the ingredients on hand at all times, and you're ready for last-minute invitations, guests, or gift-giving ... or for spontaneous cravings!

Line an 8"x8" baking pan with foil, letting the edges extend over the pan, then grease the foil.

In a small saucepan, melt together the frosting and the milk chocolate chips over low heat, stirring frequently, until smooth; pour into the prepared pan. Sprinkle with mini chocolate chips and toffee chips, pressing lightly. Refrigerate until set.

Using the extended edges of the foil, pull the fudge from the pan. Pull sides of the foil down and trim edges from the fudge to get clean lines. Cut into 1" pieces, and place into decorative paper cups for serving.
Posted by Yenta Mary at 6:00 AM 6 comments: 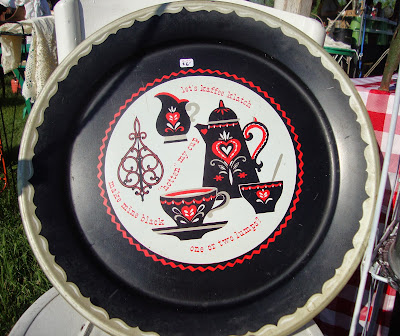 And for those of you who can't get to Ann Arbor to see "American Foodways: The Jewish Contribution" - the cookbook (and much more!) exhibit I worked on at the University of Michigan Library - here's a link that will let you peruse the materials. The food festival section is my own personal baby; and I did a lot of sorting and choosing among the culinary ephemera, as well ... :) 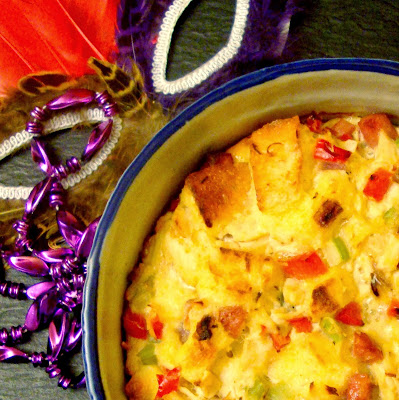 Two N'awlins classics, baked into one: gumbo and bread pudding!

With some leftover chicken, a Cajun-spiced bagel, and the makings of "the trinity" - celery, onion, and peppers, which are the heart of Louisiana cooking - it only seemed fitting to take some of the essential elements of gumbo and combine them with the legendary dessert ... only making it savory. This is quick, easy, no-fuss, and delicious! It's a bit reminiscent of a frittata, and perfect for a light supper or a brunch.

You could also add some shrimp, which is often an ingredient in gumbo. But my dear friend Candace, a native of Louisiana who now lives in New Hampshire, told me that "Shrimp would be delish but they are unnecessary" given all of the other goodies already in the mix.

A colorful way to spice up leftovers - enjoy!

An update on my shoulder (mentioned in this post): I've been vindicated - my shoulder pain is more than just tendinitis! Not necessarily good news, but at least an answer to symptoms that weren't supported by the initial x-ray and MRI and an explanation of why physical therapy made it all worse. New x-rays show that the top bone in my shoulder, the acromion, has a slight dip to it that has apparently spent 50+ years abrading the tissue underneath it. So I have an impingement, to quote the orthopedic surgeon, which is severely restricting movement because of considerable scar tissue. I have edema in the bursa, and I do indeed have rotator cuff tendinitis - a trifecta! Had the thrill of a steroid shot (with ABUNDANT thanks to Craig for being the brave one who held my hand and actually looked at the needle), with hopes that it will reduce inflammation and pain as well as breaking up scar tissue. In a month, I get reassessed. No sling, as immobilizing it is counterproductive to maintaining already limited motion ... gee, and I was making plans to bedazzle one!

Heat the butter in a medium saucepan over medium heat. Add the celery, pepper, and onion; cook for 2-3 minutes, until softened. Place into a large mixing bowl.

Cut the bagel into 3/4" pieces and add to the mixing bowl along with the salt, red pepper flakes, chicken, and sausage.

Combine the eggs and milk; pour over the bagel mixture, stir, and let soak for 10 minutes. Pour into the prepared dish and bake for 40 minutes until the top is golden and puffed and a knife inserted into the center comes out clean. 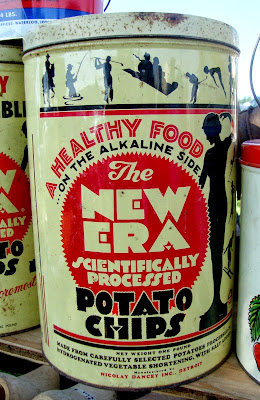 Found this tin at a flea market in Midland, MI this summer.  Yummy, huh???

How I Spent My Summer Non-Vacation

Rosh Hashanah - the Jewish New Year - has passed, as have the 3 subsequent holidays (Yom Kippur, Sukkot, and Simchat Torah) which follow it. August and September were chaotic at my day job, filled with 6-day work weeks, some 10-hour days, a 7-day stretch at one point ... oy! Throw in my gig emcee-ing the Girl Scout Cookie Bake-Off on September 19; the reception for "American Foodways: The Jewish Contribution" - the cookbook exhibit I'd been working on since December - on September 24; and finishing work on the dessert buffet for "Gimme Shelter" - the fundraiser for Alpha House, which cares for homeless families - on September 28 ... well, you can see that my plans to be back in early September kinda got thrown off, just a bit. Only a fool would've thought it possible; but I've missed everyone, so I had high hopes!

And these little diversions don't even take into consideration writing 3 posts/week for AnnArbor.com, which has been absorbed by MLive.com and has returned to being called The Ann Arbor News in print on Thursdays and Sundays ... writing 3 articles for the Washtenaw Jewish News' September issue (the one about the exhibit not only made the front page, but it was above the fold!), and my usual cookbook piece for the October issue ... my parents both being in the hospital this summer, even overlapping one day: my mother fell down the stairs, my father's congestive heart failure is increasingly creeping toward end-stage ... somehow managing to damage my left shoulder: woke up, thought I'd slept on it oddly, didn't resolve, negative x-ray, 4 sessions of physical therapy made it far worse, MRI shows rotator cuff tendinitis but symptoms indicate more, seeing an orthopedic surgeon on Thursday ... sigh. And, of course, I tried to spend time with loved ones so they wouldn't feel neglected - that was mandatory!

Why be bored and twiddle your thumbs, when you can have this much fun, right???

Rather than writing a seemingly endless post that will make everyone groan as they see the unwieldy length of it, let me give you the highlights of "How I Spent My Summer Vacation" ... or, rather, how I spent Food Floozie's vacation since I've personally been workin' my little tuckus off. 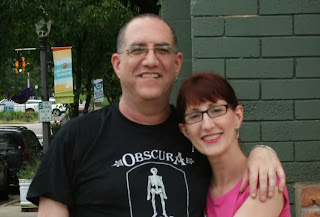 - Craig's birthday was June 15. We went thrift shopping and antiquing in Lansing, an hour away. And we ate at Meat, a barbecue restaurant that needs to open an outlet in Ann Arbor. Just a few weeks into my hiatus, and I was longing to wax rhapsodic about this place! Disco Fries - OMG!!! French fries topped with bacon gravy - yes, bacon gravy! - and then topped with cheese ... gasp! It could very possibly be one's last meal, but you'd certainly die happy. Good eater that I am, I still couldn't eat all of this; Craig happily finished the sandwich while I greedily devoured the fries. And since they don't serve dessert, they were completely endearing by cobbling together a birthday "cake" for Craig by offering a honey bun topped with a Pop Tart ... :)

- I was a judge at the Ann Arbor Civic Theatre's 1st Annual Pie Bake-Off. Is there anything better than eating pie on a summer afternoon??? Rhubarb ... peach ... cherry ... sigh. 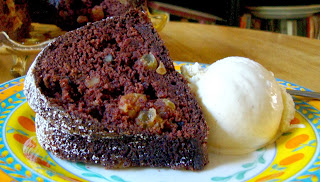 - I found out that the world is a very small and haymish (warm, welcoming) place, when the grandson of a woman I'd mentioned in an article back in 2009 wrote to me; this turned into a story about food, family, and friendship ... and we all know that these are a few of my favorite things: Frances Maggin's Applesauce Cake and a Great Story.

- The Tigers are in the play-offs against the Red Sox. And last night's game, with that game-tying grand slam by Big Papi, is still reverberating here in Michigan! If you'd like to cheer on the Tigers in tomorrow's game, here are a couple of recent recipes to help you in your mission: Maurice Salad Subs and Greektown Sliders. We could've come back to Detroit 2-0, but now we're tied at 1-1 ... :( 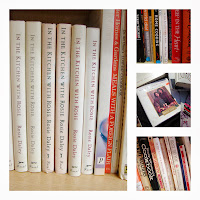 - I have continued my twisted little mission to document thrift shops all trying to sell copies of In the Kitchen with Rosie. Craig at first thought it was a bit perverse, but has realized that this is a gift that keeps on giving; he now points out copies to me as we go to various stores!

- Oh, and before I forget: please vote for my Chocolate Cherry Kugl!!! I'm a finalist in the National Yiddish Book Center's contest to find the best recipes for traditional Jewish foods. A friend of Jeremy's once said it was "like eating crack" ... :)

So, I'm aiming to be back here on Mondays, and may offer some Wordless Wednesdays, too; Frugal Fridays can be found on MLive.com. I'll likely serve up recipes, for the most part, but every so often there needs to be a rant or an amusing anecdote ... something to liven things up a bit! I'm hoping to be able to catch up with all my friends, and just recalibrate a bit after all the nonsense of the past couple of months. Then we'll see where it goes from there!