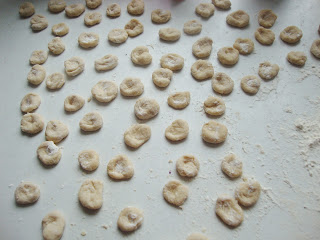 I read Frank Bruni's autobiography, Born Round, a couple of summers ago. Although it tells a tantalizing tale of his years in the seemingly enviable, but complicated and stressful, position of New York Times restaurant critic, more importantly it's a story of finding oneself, of a difficult relationship with food, and of a loving family.

One portion has stayed with me since reading the book:

"Adele's (Frank's grandmother's) specialty was what most Italian food lovers know as orecchiette, which means 'little ears.' Her name for them, strascinat, pronounced something like strah-zshi-NOT, came from her southern Italian dialect. It alluded to the Italian verbs for 'to trail' and 'to drag' (strascicare and trascinare), because to make this pasta, you'd drag a knife along a sheet of dough, repeatedly pressing down and pinching off just enough of the dough to make an ear-shaped nub of pasta ....

Adele used her thumb as the mold for each strascinat. She would sit at a sizable table, an enormous rectangle of dough before her, and pinch and mold and then flick, the concave nubs landing in a nearby heap. She'd sit for hours, because there was no reliable machine for this endeavor, no dried pasta from a box that could emulate the density and pliancy of her strascinat, no alternative to doing the work, no matter how numbing it was. And even if there had been an alternative, she wouldn't have taken advantage of it. Dried pasta from a box didn't advertise how long and hard you had labored. Dried pasta from a box didn't say love. When you ate a bowl of Grandma's strascinat, covered in the thick red sauce that she and most other Italians simply called 'gravy,' you knew that every piece of pasta had the imprint of her flesh, that the curve of each nub matched the curve of her thumb."

Most people would read this and think, "Wow, Frank's nonna really loved her family. Good thing you can buy so many different pasta shapes at the grocery store, now!"

I, of course - you know what's coming! - read that and immediately thought, "I've gotta try making these some time!" The love infused into the pasta, the passion for preparing real food from scratch ... I was seduced.

Well, last week we had a snow day: 6+ inches of snow coupled with messy roads and no power at work. We didn't have any power at home, either, but Jeremy and I made the very best of it. He played Nirvana, the Ramones, and the Pixies on his Kindle, and - thankfully! - our gas stove worked as long as we lit the burners ourselves.

And so, the day had come. Jeremy and I made our own pasta!

I mixed the dough, then Jeremy came to help me with the shaping. After reading a number of recipes for strascinat, which - as Frank noted - I've always known as orecchiette [ohr-ay-keeAY-tay], I saw that many involve rolling the dough into a cylinder and then cutting pieces which are then formed, as described above, by imprinting one's thumb into them. So, that's what we did. One by one by one by one ... over and over again. To some, it might be boring. To some, it might be futile.

To us - yes, even to Jeremy (though if we'd been making enough to feed an entire family, rather than just ourselves, he might have had a different opinion!) - it was fun. We chatted, we compared homely samples to ideal ones. We made dinner and a memory, all at once.

Throughout the afternoon, Jeremy and I checked on our "babies" as they dried. I cooked up some diced tomatoes, red onion, garlic, hot Italian sausage, and kale, because the beauty of orecchiette is that the little scoops hold bits of the sauce. Different pasta shapes are designed for different toppings. The sturdier and heartier the base, the sturdier and heartier the sauce should be; thus, a light marinara is lovely served over angel hair pasta, but our orecchiette required something substantial.

And then, as the sun went down and the house was cold and every candle I own was burning, Jeremy and I ate an amazing hot and heart-warming meal.

In a large mixing bowl, combine the flours and the salt.

In a measuring cup, combine the water and the egg; pour over the dry ingredients and stir to mix.

Sprinkle flour on the countertop and knead the dough until it is no longer sticky, incorporating a bit more flour as needed. Divide dough into quarters, wrapping the unused portions in plastic.

Take one piece of dough at a time and roll it out into a 1/2"-long cylinder. 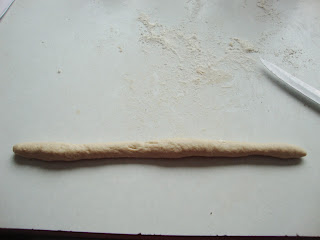 Cut pieces of dough about the size of a chickpea.

Roll the small pieces of dough into balls, rolling in a touch of flour if needed; then press down with your thumb to make a flat disc that curves slightly like the shape of an ear. Continue until you've used all of the dough. 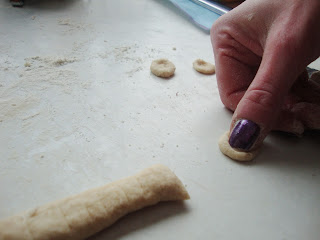 Let the discs rest for 30 minutes, then re-press each one to reinforce the shape. Let rest for 1 hour to dry.

Flip the discs over and let them rest for 1 hour or more, until almost dry.  They won't be hard like boxed pasta, but they'll be drier than when you first formed them.

Bring a large pot of salted water to boil. Add the orrecchiette and cook for 6 minutes or so, until they float to the top and are just "al dente" - slight resistance to the tooth. 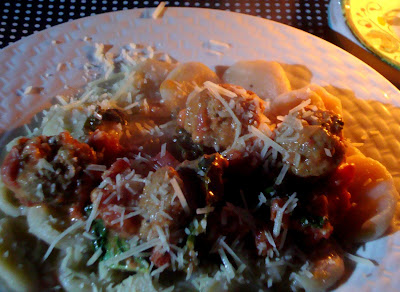