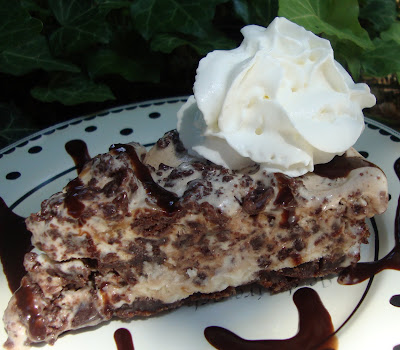 Some things in life are serendipitous, and others can be a bit of a challenge. I had thought that I was going to make some chocolate cookies on Sunday morning, then fill them with ice cream to make sandwiches ... however, my plan went pretty far awry!

A good friend had decided she'd never use a brownie mix that had been loitering in her cupboard, so she gave it to me. So on Sunday I decided to put the mix to use, and had determined to make a variation printed on the box which suggested adding 1/2 cup flour to the batter and then making drop cookies instead of just plain ol' brownies.

I followed the instructions, made large cookies, baked them, they were set ... and they turned out to be much too soft. They folded in on themselves when I tried to remove them from the baking sheet for cooling on a rack; leaving them to rest on the sheet for awhile didn't help. They sank into the cooling racks, becoming a bit wavy. They were not feeling particularly cooperative!

But I am not a girl who throws out food ... nope, not I. So, if the cookies weren't going to submit to my iron will, I was simply going to have to teach them a lesson. I crumbled them.

And then those crumbs became part of the crust for an ice cream pie, in honor of today's Pie Party extravaganza - the cyberspace phenomenon in which it was randomly suggested that July 5 be a celebration of pie, and virtually everyone else on Twitter and Facebook seemingly signed up for this noble mission.

Even after using some of the crumbs, there were a lot of them left ... a lot. So I did what anyone with a ravenous sweet tooth would do on a near-90 degree day: I combined them with ice cream! That became the filling for my pie.

And so, there you have it: my contribution to the Pie Party - Brownie Ice Cream Pie. It has no redeeming nutritional value; but you'll be so, so happy while you eat it that you really, truly won't care how many calories you've just ingested!

Brownies:
(You can just prepare a batch of brownies and crumble them; baking the mix into cookies won't change the consistency, and this is much easier to do)
1 19.8-ounce box Kroger Ultra Moist Deluxe Fudge Brownie Mix
1/2 cup oil
1/4 cup water
2 eggs

Preheat oven to 350F. Combine all ingredients in a 9" glass pie pan. Press mixture against the sides of the pan and press evenly over the base. Bake for 15 minutes, then let cool completely.

Combine ice cream with brownies; spread into the crust. Freeze overnight, then let rest on the countertop for 10 minutes before slicing and serving.

Cut the pie and place each serving onto a dessert plate. Spritz with whipped cream and drizzle chocolate sauce over everything.

Makes 8 very generous servings.
Posted by Yenta Mary at 12:14 AM

This post should have a warning label. Positively sinful!

You are a girl after my own heart! There's nothing better than brownies and ice cream, in my honest opinion. I give you a standing ovation for this one, Mary. Yum!

Really??? This just happened - by mistake?? I couldn't 'plan' such a brownie mishap to end up so beautifully! I think I need to invent some sort of laptop screen cover - to protect my computer from moments like this when I really want to take a bite!! De-lish, I tell ya!!

You're amazing, Mary! What a great summertime treat! I've gotta make this for my grandsons next time they're out. They'll think you're a genius for sure! (which, of course, the rest of us already know.) :-)

An excellent use of your resources! Looks fabulous, and everything is better with ice cream.

Now I shall obsess about this creamy chocolate laced pie all day long. Thanks Mary :) Awesome job turning a brownie disaster into brownie bliss!! Looks delish!

You can never go wrong with brownies and icecream! Whether in a pie or in the sky, it's always delish!