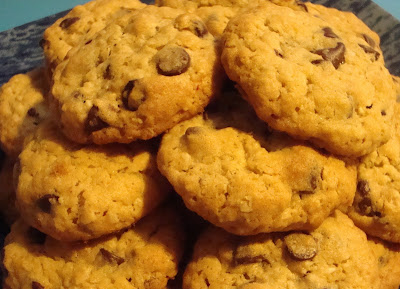 In 1992, Hillary Rodham Clinton caused quite the stir by making the following statement:

"I suppose I could have stayed home and baked cookies and had teas, but what I decided to do was to fulfill my profession which I entered before my husband was in public life."

Well, I was one of those cookie-baking stay-at-home moms who took significant offense to her seeming dismissal of our work as less than important and a waste of her time. But over the years, my annoyance has been tempered ... somewhat. In fact, it's dissipated to the point that I am here to acknowledge Hillary's birthday today by baking a batch of cookies from her own family recipe.

After this incident, Family Circle magazine leapt into the cookie-baking fray by sponsoring a recipe contest between the spouses of the Democratic and Republican presidential candidates each election year. Each woman - 'cause they're always women - provides a recipe for cookies, and readers theoretically bake a batch of each to compare them before voting ... yeah. Even with regard to cookies, you know folks are still voting along party lines!

Hillary rose to the challenge that she'd instigated by offering a recipe for oatmeal chocolate chip cookies, which competed with Barbara Bush's family favorite of plain ol' chocolate chip cookies. Margot Perot, Ross' wife, had been invited to compete too, but did not toss her spatula into the kitchen.

These cookies, I have to say, are really very good - they deserved their win! They rise nicely instead of spreading, they're tender, and they've got a really good flavor, which surprised me. I followed the recipe exactly, rather than using butter or cinnamon or nuts which I would normally have added to compensate for the Crisco.

I have to say that while I've never voted for her, I would definitely vote for Hillary's cookies if given the chance.

3. Beat together shortening, sugars and vanilla in large bowl with an electric mixer until creamy. Add eggs, beating until light and fluffy. Gradually beat in flour mixture and rolled oats. Stir in chocolate chips.

4. Drop batter by well-rounded teaspoonfuls onto baking sheets. Bake for 8 to 10 minutes or until golden.
Posted by Yenta Mary at 8:00 AM

What a fun post, Mary! The cookies look pretty good, and I'm glad to see that it doesn't take a village to make them. ;-) Thanks for the recipe. It's hard for me to pass up putting nuts in any baked goods!

Fascinating! I do like oatmeal choco chip cookies.. but it's not my fave. I am a snicker doodle type of girl!

Such interesting trivia to go along with that delicious looking cookie recipe. Chocolate Chip cookies are my favorite no matter who makes them!

I'm with you as far as Hilary goes, but boy, those cookies sure do look good. I've been told that solid shortening turns out a higher, lighter cookie, but never tried it.

Now that you've made them and are pleased with the result, I'll definitely give it a shot. After all, you've never steered us wrong!

Thanks for sharing! Oatmeal cookies are Mr B's faves. :~)

I actually love Hilary and I think I will love these even more!

I don't think that Hillary's comment is a slur against stay-at-home moms. I think it is a comment on the belief that men can decide to go for any profession, while the other half of humanity should limit themselves to mainly one career. Personally, I think that people should do what they like and excel in. =)