A Moveable Feast That Was "Plentiful and Free!" 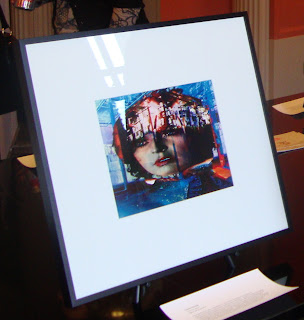 Last night, Tom and I went to a really lovely reception at which some of his digital artwork was featured. We attended Vital (A)(R)(T), a curated exhibition presented in conjunction with the "Depression on College Campuses" Conference sponsored by the National Network of Depression Centers, of which the University of Michigan is a member. One of Tom's pictures had actually been featured in the advertising for the conference's national tour, though it wasn't physically present among the very few offerings that space allowed for.  But another, which I really loved and hadn't seen before -- "The Fires Burn" -- was featured (shown, viewed, admired!) during the meet-'n'-greet-'n'-eat at the end of the first day. It was SO fabulous to see the piece displayed publicly! And it was also great to meet Lindsey, the woman who'd acted as curator for the very poignant and touching exhibit of works representing a "diverse group of voices shining a new light of hope on mental illness and social stigma."

After admiring and schmoozing we meandered our way over to the food tables, which had been beautifully presented by the ever-amazing The Moveable Feast.  We'd originally planned to go to Silvio's for pizza afterwards; but when standing right next to a gorgeous buffet table, we debated our options: handmade, organic pizza ... free food that looks soooo good ... pizza ... free food ....  And for once -- truly a rare occasion because I am absolutely the least decisive person on Earth, particularly when given choices among food! -- I took a stand: "This is plentiful, and it's free."  Who were we to turn down such generous hospitality???  And my sweetie agreed with me that the offerings we were perusing looked and smelled amazing ... and so, we set ourselves to the task of eating dinner. 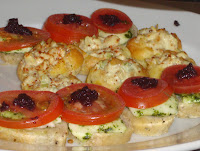 There was an extraordinary fruit tray with pineapple (my personal favorite), cantaloupe, honeydew melon, watermelon, and both red and green grapes -- everything was perfect and delicious.  We moved on to red pepper hummus with both cucumber slices and very light/airy pita chips for dipping.  Next were spring rolls, as well as some (presumably?) taquitos; they were very good, whatever they were!  There were barbecue meatballs with just the right amount of zest, some puff pastries with a luscious creamy filling, and also some exceptionally good bruschette with fresh mozzarella, pesto and tapenade-topped tomatoes (love that alliteration!) ... sigh. 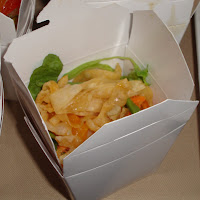 I was greatly impressed (both visually and taste-wise) by the cute little Asian salads -- shredded lettuce, Mandarin oranges, chow mein noodles in a light ginger vinaigrette -- which were served in small Chinese food take-out boxes ... a simple touch, but a brilliant one!  I can cook, but presentation is admittedly not my strongsuit; I loved this idea, and will likely abscond with it at some point ... hey, at least I'm giving credit where it's due! 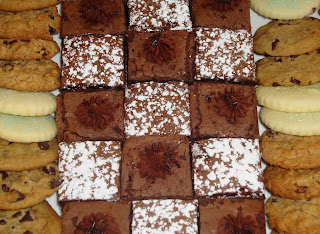 And then, as though all of the savory options hadn't been sufficiently tantalizing or filling, there was dessert -- and not just little mini tidbits and tastes of dessert.  Full-sized brownies ... oh, and chocolate chip cookies ... oooh, and oatmeal cookies ... (gasp!) and sugar cookies!  Tom (lover of baked goods that he is, which is just one of his very many exceptional qualities) very astutely selected one of everything, and we split each treat in half with much glee.  The rich brownies -- with just a dab of frosting -- were my personal favorites, devotée of chocolate that I am.  I was a very happy and giddy girl!

And so, another round of indulgence in fabulous food sadly came to an end ... until the next adventure!  We do still owe Silvio's a visit, and pizza is sounding really, really good right now ... :)
Posted by Yenta Mary at 11:37 PM

Great blog Mary! I love the take out boxes as well.