Silvio's -- So Much More Than Just Pizza! 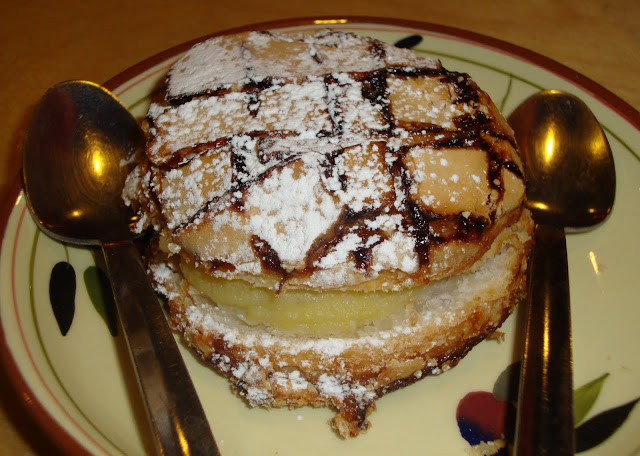 Tom and I had planned to go to Silvio's Organic Pizza a couple of weeks ago, after the Vital (A)(R)(T) exhibit that one of his digital photographs had been shown in; but the food was so bountiful and beautiful at the reception that we got sidetracked and found ourselves eating dinner -- hummus with pita chips and vegetables, fruit, egg rolls, salad, and an array of cookies and brownies -- at the buffet table provided. So this past Thursday night, after I met Tom downtown after work and we were debating our dinner options, Silvio's was the perfect choice.

Anyone who knows me knows that I am the least decisive person on Earth, especially when food is involved. I can make life-or-death decisions instinctively on the spur of the moment, and have unfortunately had to do that more times than I like to contemplate. So my theory is that when I actually have choices to peruse and the luxury of time in which to do so, my brain goes into paralysis. 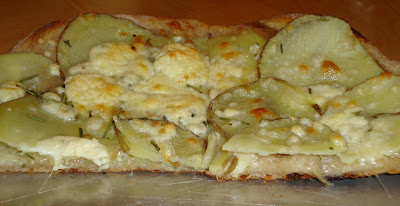 Thus, in surveying the beautiful simplicity found in Margherita pizza (tomato sauce, mozzarella and basil) or Pesto pizza (basil sauce, pine nuts, parmesan); the novelty of the exotic Grape (with Fontina and -- of course! -- grapes); or the generosity of stuffed pizzas (vegetarian or tuna with rapini or cod, just for starters), my mind started to swirl as my soul cried out for all of it. Tom, fortunately, was able to hear potatoes calling him, and so we indulged in the sensuous -- on every level -- and seductive #9: Thinly sliced potatoes covered with blue cheese and mozzarella, with just a sprinkling of fragrant rosemary ... sigh.

Our pizza was brought right to us, with the cheese still bubbling from having only left the oven moments earlier. It smelled amazing, with the rosemary wafting through the air; and when we bit in, you could hear the crisp crust crunching but not resisting. It was hot but not sear-the-roof-of-your-mouth hot, and it held together both when cut or when folded (rather than the cheese oozing off and the entire slice deconstructing and falling apart). And the taste was incomparable, a combination that was perfect (a lot of carbs, yes, but carbs that worked in unison) with no one flavor overriding another. This was so, so much more than just "pizza" -- that stuff you can buy for $5 from a franchise or something you can toss into a microwave to turn to goo. This was a true vision of beauty and love, interspersed with kisses from Tom ... :)

Dessert was yet another indulgence -- a crisp round of puff pastry with a luscious creamy filling, delicately sprinkled with confectioners' sugar. Tom eats very nobly -- a former vegan and vegetarian, adores spinach and kale, eats organic food almost exclusively; and yet, he has a sweet tooth and loves baked goods. So the exceptional array of pastries was as tempting to him as it was to me, the girl who doesn't just have one sweet tooth but a full 28 of 'em (having had 4 wisdom teeth pulled decades ago). Tom had made the difficult decision of choosing from among the croissants and bombas (paczki-like filled "doughnuts") and strudels, thank goodness -- I'd likely still be there, 3 days later, if the job had been delegated to me! We hated to break into it, as gorgeous as it was; and yet, it called, it beckoned, it seduced us ... there was no way to resist, and it was so good that I literally picked at the flaky little crumbs left on the plate after the treat had been relished.

There was live music from a guitar-playing trio, warm and efficient service, and food so fabulous that it is difficult to fully describe. Silvio's ... sigh. Repeat visits will be inevitable ....
Posted by Yenta Mary at 1:12 PM

Yum... haven't been there since the expansion. I've gotta go!

Hello FF... My oh my... Silvios is happenin. That food looks too good for words. Your discriptives are rockin too. I thought I was the only one who actually HEARS food calling to them. LOL.. Sighhhhh I love pizza. So happy you stopped over to Sandwich365. I'm flattered! More later, Keri (a.k.a. Sam)

Hey, you don't have a follow button thingie... how come?

Subscribing and following is right below the latest post, and sharing is right below that. You can also follow me on twitter: twitter.com/foodfloozie. If there's more that I need to do, I can't find it in the list of gadgets!!! Technology is not always my friend ....

Apparently, up at the top left corner there's also a "follow" button to click on ... who knew??? I spend my time writing and dreaming about food or drooling over it, rather than looking at what's on the screen in front of me!

FF, you're the best. Hurry up and post another one. I'm having seperation anxiety here. Keri ... pick one: