The Shiksa, The Bagels and the Blintzes 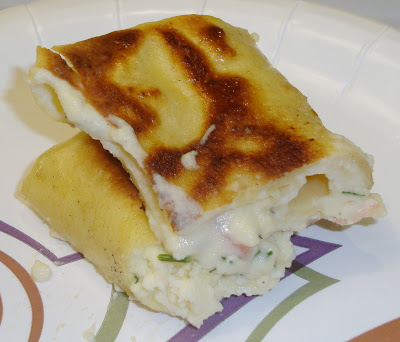 I love, love, love what is collectively known as "Jewish" food -- absolutely adore it!!!  Now, of course, I have to clarify that I love all Jewish food -- both Sephardic (mostly non-European -- the Asian, African and South American cuisines of those expelled around the time of the Spanish Inquisition) and Ashkenazic (Central and Eastern European).

When most people think of traditional Jewish cuisine, they inevitably think of the Ashkenazim and the chicken soup, lox, pastrami and other foods available at delis.  And ya know what???  While that is only a minor part of the entire repertoire, that's okay -- those foods are good for the soul, and each one holds a special place in my heart.  There's time to introduce people to tzimmes and charoset and hamantaschen (no, they're not just German Christmas cookies -- they're Purim treats!), and all sorts of other delicacies. 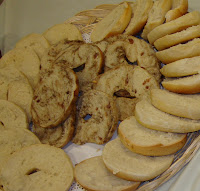 But last Sunday, I indulged in some of the old favorites -- bagels and blintzes.  It was a good day, I have to admit!  I try to limit my intake of yeast and of white flour, but sometimes God sends a strong enough message saying "It's okay" that you just have to give in.  I'm sufficiently obstinate and enough of a control freak (despite having no semblance whatsoever of influence over my own life) that I'm not usually a "'Cause God said so" kinda girl.  But when God speaks to me through a tray of bagels, as well as through freshly made blintzes ... well, who am I to turn a deaf ear???  He even placed cookies in my path, so I indulged in just one oatmeal raisin cookie; and since oats and raisins are good for you, I can delude myself that there was some health food on the plate! 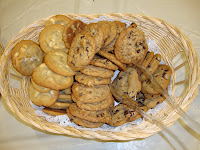 Anyway ....  after enjoying the bagel and cream cheese that I don't usually permit myself, while simultaneously schmoozing with friends, the wonderful Marcie Greenfield (whose Savor Ann Arbor walking tours are de rigueur for newbies and townies alike, and on my "to do" list when we can coordinate our busy schedules) gave a demonstration of how to make blintzes -- those fabulous crepes filled with ricotta or sour cream with fruit or salmon or lots of other mix-ins, then fried in butter because they're not unhealthy enough already.  C'mon -- you know that butter makes everything better!  How else will they get that gorgeous golden glow, short of a tanning salon???  Baking may be a substitute, but it's just not the same.


I don't usually go through the many steps required to make blintzes; they're not difficult, but they are time consuming ... and frankly, everyone already knows that I just want to eat!  I have a recipe that calls for pouring some batter into a baking dish, cooking it a bit, then topping it with the cheese filling and pouring the rest of the batter over everything; then it bakes into a 3-layer casserole that can be cut into squares, with a fruit sauce poured over it (since I've always made a sweet blintz casserole, though after tasting Marcie's lox/dill filling that will change).

So Marcie was giving an excellent presentation to a group of some exceptional women about the beauty of blintzes, and trying to pour batter and fill/fold crepes and brown the blintzes ... it was a lot to manage when the steps progress quickly and require undivided attention.  So when she asked if I wanted to help, well, who was I to refuse both a friend's invitation and an opportunity to cook?  So I buttered the pan, poured the batter (not as well as Marcie did, with a few holes here and there ... mine weren't pretty, but who cares once they're filled and fried and fabulous???), and generally did my part to be helpful.  Here's the process, for those who want to go for the full gusto:

Pour the batter into the pan and cook it until the edges curl .... 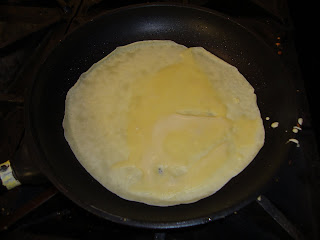 Flip the crèpe to cook it briefly on the other side .... 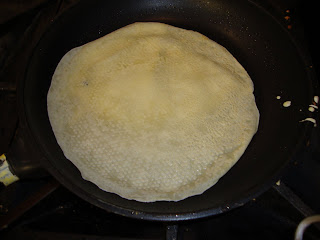 Place the crèpe onto a work surface .... 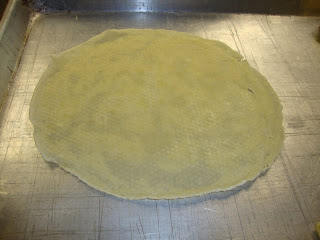 Place your desired filling into the center of the crèpe (this one happens to be ricotta with lox and dill ... sigh) .... 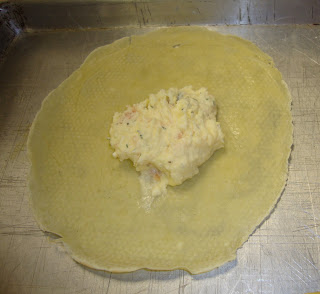 Fold up the left and right sides, then the top and bottom edges to form a square; then fry the blintz on both sides in a hefty dose of butter to get one of the truly glorious wonders of the food world!!! 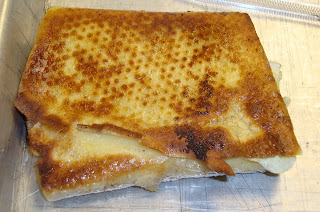 I ate with abandon, because bagels and blintzes are truly foods of love.  Blintzes are traditionally served for the Jewish holiday of Shavuot (which will begin on the evening of May 18 and end 2 nights later), which celebrates the Israelites' receipt of the Torah; dairy foods are part of the custom, and these can be rolled to resemble Torah scrolls.  I'll have to remember to make my Fried Ice Cream Torah Scrolls for you, 'cause they're just too cute ... though I'll be coming home from a trip to Philly with Tom that Wednesday -- his daughter is earning her Master's in Urban Design from the University of Pennsylvania!!! -- and I may be too busy doing laundry and replenishing groceries, not to mention spending time with Jeremy whom I'll have missed terribly over the course of 5 days, to make the effort.  But it's the thought that counts, right ...?

Until next time, eat with no regard to fat or sugar or sodium contents -- just enjoy!!!
Posted by Yenta Mary at 12:03 AM

Beautiful!
One of these days I'm going to get brave and try to make bagels....

Bagels are a lot of work, but it was fun the one (note I said ONE!) time I made them. Not as good as what you can buy, at least until more practice is invested. But a worthy endeavor!

Savory crepes! Wonderful! I'd much rather have those kind. Well, I do like them with chocolate. I guess I just want one of everything! Big surprise.