Still Having Fun While Senility Creeps In 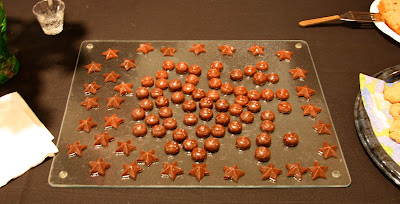 Well, the Docent Invitational Exhibit Reception was held at the Riverside Arts Center this past Saturday night, and I was there twirling in my beautiful new dress in the only pair of high heels that I own.  Jeremy told me that Tom should be sure to let everyone know I'm already taken; and Tom said I looked "like a million bucks" ... :)


But do I have a photo to commemorate my rare and priceless non-officewear, non-jeans, and non-jammies moment?  Did I take a picture of the buffet table that I, of course, meandered over to on "enumeritus" (thank you, "Squidbillies"!) occasions?  Heavens, no!!!  Your foolish Food Floozie switched purses -- bad words that I haven't uttered, literally, in years -- and very inconveniently left her camera at home. 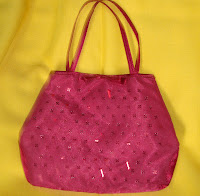 Now, admittedly, the little red purse with sequins was cute, and it was much easier to tote than the behemoth that I usually carry my life around in.  However, while I remembered other critical items like my lipstick and a card bearing the Jewish traveller's prayer (don't leave home without it!), not having brought my camera is really posing (no pun intended -- ha!) some problems for someone who likes to decorate her posts with a little bit of color and with lots of food.
So the one and only picture that I have to offer from Saturday night is the lovely one at the top of the page.  MUCH credit to my beloved, Tom, for taking it before the schmoozing began and further opportunities were lost!!!  But unfortunately, I now have to compensate for the lack of pictures from the actual event by placing props around my home and asking them to pose photogenically for me ... sigh.

Anyway ... let me tell you about those fabulous chocolates that are not yet for sale but will be soon, I hope -- I'll keep you posted when I learn more.  They were made by a friend of Tom's who is a devoted chocolatier in his spare time, after work.  They're raw (only heated slightly, for melting), vegan and organic -- all normally terms that would make me think of tofu and other wretched ingredients not readily placed into my mouth.
But these sinful little tidbits are simply the purest chocolate, with nothing to interfere with your sensual experience.  They literally melt over your tongue as you are transported into a reverie ... I exaggerate not, even though I am admittedly prone to both enthuse and to effuse.  Daniel, the man who creates these magical treats, has located a commercial kitchen for production and is currently networking to seek outlets for sales.  A company name, packaging ... all of those little details are still a-brewing.  But Daniel had better speed up this process, as I steered every one of my guests on Saturday night to the chocolate tray and every single person was nearly in ecstasy from just the small tasting opportunity. 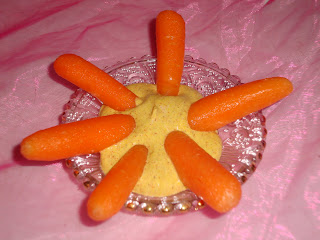 As for the rest of the buffet table -- my vegetable and chip tray with Spicy Mustard Dip (photo taken prior to Saturday night, or else you'd be using your imagination for that, too) seemed to be pretty popular, though no one seemed quite capable of figuring out that the bowl of chocolate stuff surrounded by cookies was yet another type of dip ... sheesh!  Cookies disappeared, but the bowl of chocolate -- bowl of chocolate, may I reiterate! -- was barely acknowledged.  Oh, well -- their loss!  The mini bagels schmeared with a lox-dill cream cheese and then cut into quarters to become bite-sized were also a hit, so I was 2 for 3 with my offerings.

Besides my contributions, there was a Mexican dip in a 9"x13" Pyrex pan that looked remarkably like spaghetti topped with tomato sauce (to my trifocal-ed eyes) until a closer perusal showed beans and sour cream and -- ohhhhh -- shredded cheese underneath the chunks of tomatoes.  It was good, once I figured out what it was!  There was a beautiful cheese tray with very thick asparagus for a garnish (???), lots of fresh fruit, cheesecake, cookies, and more food than I can remember after 4 long days.  (The senility of the title refers not only to having forgotten my camera, but to my inability to even remember why I've walked into the kitchen at any given time, let alone what I ate on Saturday!) There was even a nice assortment of beverages such that I could add dribbles of white wine to my sparkling water, making me feel a bit grown-up in my party dress (but without becoming an embarrassing drunk, since I have perhaps one glass of wine annually and have no tolerance whatsoever). 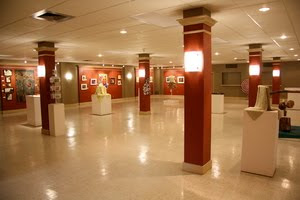 Tom's father and stepmother drove out to Ypsi from Royal Oak for the event, which was a nice surprise; I'd known they'd been invited, but hadn't expected them to come out.  But as Gary put it, this was a family event and he always shows up for family events ... even though, as Monica pointed out, the Masters was on and her golf-addicted husband was missing it!   Tom's sister Sandy came, as did an old acquaintance from his former writing group.  Several of his co-workers, who are just wonderful, attended -- Daniel (of chocolate fame), Flo, and Sara (whose mom has even commissioned an artwork from Tom after seeing a fabulous piece he'd made featuring a photo of Sara).

Fellow co-workers and very dear friends of Tom's -- Alan and Carol -- had prior commitments and couldn't attend the reception, so they'll get private tours; Carol's will actually be tonight, after dinner at the Prickly Pear (which just happens to be donating 10% of today's proceeds to Alpha House to help the homeless, I might add, which is how it was selected as the restaurant du jour).  I asked Tom to warn Carol that I have the odd habit of photographing my food, so she should be prepared ... though, according to my beloved NYT, I am not alone in this hobby; and I do it for the sake of my faithful readers on AnnArbor.com and Food Floozie, rather than for my own perverse amusement.  Rationalize, and all can be right with the world!

Many of the people I'd invited couldn't attend because they're observant Jews and the reception was held before Shabbat ended after sundown.  But others -- mostly my "bubbes," as I affectionately call the women in their 80s who have adopted me and taught me to play Mah Jong -- came and ate and laughed and, oh yeah, made sure to schmooze with Tom and to fuss over him and to admire his beautiful artworks.  I was thrilled to have them there, and it wouldn't have been the same without their love and support.  I hope they know how special they are to me, and how blessed I felt that they considered this an important occasion to attend ... :)

So, I came, I ate, I schmoozed, I ate, I ate some more, and the reception was a huge success!  Stay tuned for my next post -- "Prickly Pear and Paintings," or something like that ....
Posted by Yenta Mary at 11:23 AM