Don't Get Hungry at the Hospital on a Sunday!!!

Well, as they say, all good things must come to an end; and the fairy tale involving edible (and even appetizing!) food at the unnamed local hospital I was parked at for the weekend while taking care of a loved one has, unfortunately, followed that adage. Whereas Saturday's turkey lunch and spaghetti dinner received glowing compliments -- repeated yesterday during a survey by the food service staff -- the meal which showed up a short while after the rave reviews were offered was ... well ... truly disgusting.

I can personally vouch for that -- I'm the brave soul who tasted it when our anonymous-by-choice patient refused to, and who tried to figure out a way to bring it home to Fuzzybutt before agreeing with the patient that the dog's digestive tract would likely not benefit from this dish. It wasn't fit for human consumption, obviously, but I'm not sure it was fit for pooches either. And while I was courageous enough to at least put some into my mouth, I'm not courageous enough to feed this to the dog and then sit around wondering whether her intestines might explode. We all know who'd be cleaning up the mess, after all. 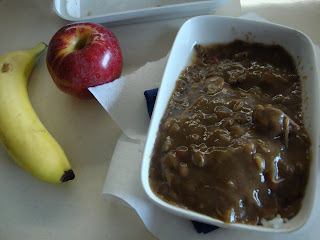 The meal in question is Beef Chop Suey. If you are ever admitted to this hospital or are visiting someone there, do not order it. I repeat -- keep away from the chop suey!!! Now, in all honesty, it would not have been on my list of options as I read over the menu; it's not one of my favorites to begin with, and the prospect of institutional Chinese-ish food just does not sound enticing to me. But our patient has fond memories of eating it at an aunt's house many moons ago -- apparently she had a knack for making La Choy appetizing, which is a remarkable feat unto itself! -- and was apparently having a nostalgic moment when it was circled on the request sheet.

But then it arrived. And it was cold -- refrigerated, not just lukewarm from having made too long a schlep from the stove to the elevator to the room. And it was mostly gravy, with a chunk or two of "beef." (I can't promise that the stuff floating in the sauce had ever seen, let alone once been, a cow.) And it smelled bad. And, as you can see, it didn't look particularly mouthwatering either. Our patient refused it outright, whereas I -- queen of not wasting food, whether incorporating leftovers into new meals or feeding my pooch's paunch with things no one else wants -- industriously tried to find a container to bring the slop home in. But our patient's wisdom reigned supreme, and I relinquished my quest for the greater good of Fuzzybutt's well-being, as well as that of my carpeting. 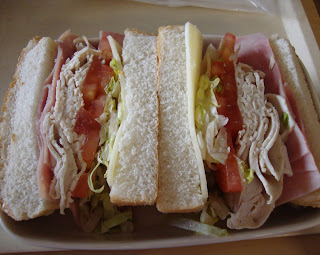 The very kind food server offered to warm up the mess, but that really didn't do it any good even once she'd performed the mitzvah. So she let the patient choose an alternative, a deli sandwich, which was excellent except for having been delivered with no condiments of any kind. I offered to go to the cafeteria in search of embellishments like mayonnaise and mustard, but this was graciously refused, I think, simply for the sake of not wanting to wait any more to stave off hunger.

I had brought my lunch -- a salad of white beans and tuna with tomatoes and onion and carrots, all dressed with a balsamic vinaigrette to which I'd added a touch of my beloved Mustard From Hell (available at Copernicus Polish Market on Main Street in Ann Arbor) -- in order to save some money and also because our patient was supposed to go home yesterday; a simple lunch requiring no heating or refrigeration seemed ideal, with dinner to be determined depending upon our patient's cravings. However, some lab results are still pending; thus discharge has been delayed until today, we hope.

And so, the rice crackers that we'd brought along for snack purposes clearly needed to be supplemented by late afternoon. I'm a good eater -- I needed dinner, which was a difficult prospect on a Sunday. The bagel shop was closed, though I wasn't particularly inclined to eat either refined flour or yeast, two things I make some effort to avoid if possible. I asked about the kosher items, which I know are prepared by Chef Cari in Oak Park; I've eaten her food before at special events she's been hired to cater, and was intrigued by the possibilities of what she might offer for pre-packaged hospital meals. But those were all bought out, despite some very helpful service from a cashier who tried to find them for me but could only apologize for their lack of availability. Good thing I don't actually keep kosher, huh???

And thus, let me show you what my non-vending machine options were, sad as the array might be for you to observe: 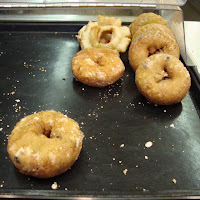 A salad bar with dried-out pasta and some sad looking fruit .... 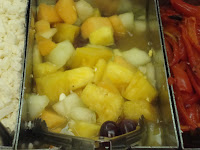 A pizza sitting under a heat lamp ... but it's made with a whole wheat crust! (I do have to admit that I gave this one some consideration, in order to get some protein from the cheese.) 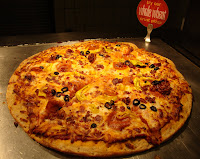 Chicken tenders, chicken fingers, some star-shaped hash browns (I think), and some fish strips maintaining their tans under a lamp .... 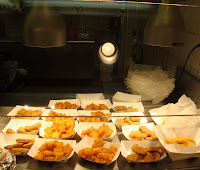 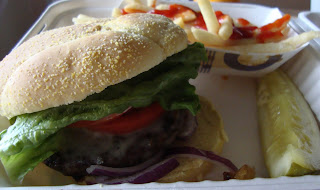 So after walking by the grill a few times, hoping not to have to resign myself to a burger, I finally resigned myself to having a burger. This picture makes it look pretty good, I must admit; and, in all honesty, it wasn't wretched. But it hardly compares to the burgers enjoyed last week, which I wrote about with such enthusiasm!

Of course, I might not be quite so disparaging had I not witnessed for myself that the beef patties had all been pre-formed -- not to mention pre-cooked! -- then placed in rows in a baking sheet, ready to be plucked up and plopped onto the grill when ordered so that they could be re-heated and further dried out. (This photo op was just begging for me, but the grillmeister was standing right there at the counter and I couldn't very well explain my intentions!) And while I could have ordered it without the bun, at that point I was just strolling down the path of least resistance and indulged in the soft, squishy refined flour bun to complete my Sunday evening dining experience. And I ate the entire thing -- fries, pickle, burger and all ... urp! (Excuse me ....) 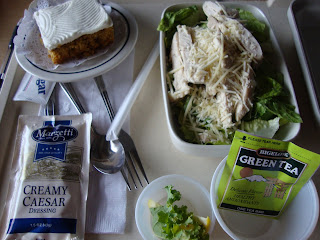 Our patient's Chicken Caesar Salad arrived cold, though not quite as cold as the Chop Suey had. The greens looked good, there was a generous amount of chicken and cheese, and the accompanying carrot cake looked and smelled very good. But this was a meager meal, even for someone who generally eats small meals and whose appetite has been compromised while not feeling well.

So fortunately our patient was permitted to meander off the ward once yet another i.v. drip was finished, and we were able to stroll on downstairs to watch the entertaining ice cream vending machine do its amusing job of delivering chocolate-filled ice cream sandwiches. We took them down to the lobby, where there is an art exhibit that appears to be inspired by microbials -- huge, colorful paintings of shapes that appear other-worldly, which make for a very lively display. And considering that our patient has artistic tendencies, this was a perfect diversion after a weekend of tedium and misery ... :)

Here's hoping that there are no further forays into the mysterious workings of the hit-a-homer or miss-by-miles hospital food service! that is some scary looking food! I had to spend a month in the hospital a number of years ago, but got pretty lucky with food. They had a multi page menu to order from at every meal, and the food actually wasn't bad at all.

You would think that hospitals would be the first to serve edible, healthy meals...but you'd be wrong! I've yet to find one that really does it well.

The best hospital food I've ever eaten was frozen yogurt out of the machine! Sad. When I had my son I was starving when I got home because of the poor quality of the food. What is UP with hospitals and school cafeterias?

Today's (yes, sadly, there were further forays into the food today ... and more pending tomorrow) options weren't as horrific as Sunday's: the potato-crusted cod for dinner was fairly good, the salad bar was actually very nice, the pizza sticks I got for dinner were a bit tired but tasted good. I found the kosher options -- a few meager sandwiches and wraps (and expensive ones, too, though kosher meat is costly). But there are still folks there on Sunday evenings -- feed us, and feed us properly if we're in a hospital on a weekend and in need of some comfort food!!!