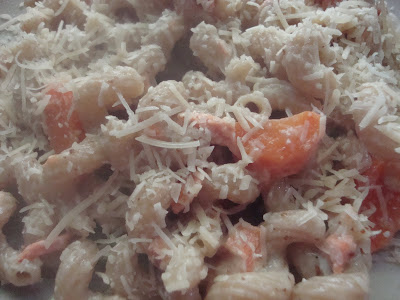 Tom and I were finally able to join our good friend (and Tom's former neighbor) Martha for dinner at her house; we'd been talking about it and planning it for ages, but health and holidays kept managing to intrude upon our scheduling. Vivian, another one of "the girls" from Tom's old neighborhood -- where Tom was virtually the only man surrounded by women! -- completed our quartet.

Despite it being a cold, dreary, rainy day, there was such warmth and fun at Martha's!!! We talked about art, about travel, about movies, about food. And oh, you wouldn't believe the generosity of the offerings -- if I had been in "blogger mode" rather than in "friend and hearty eater mode," I would have had to take a dozen pictures to show everything off.

Martha had grilled salmon and a vegetable assortment to perfection; there was a hint of charcoal aura and flavoring, but no singeing or blackening to be found on the fish or on the zucchini, peppers and Portabellos.

There were gluten-free breads that were reminiscent of English muffins and very good; I'd never had them before. There was salad, there were potatoes and yams, Vivian had brought braised escarole, there was tempeh, there were gluten-free date snickerdoodles for dessert ... the fruit salad Tom and I brought paled by comparison to the abundance surrounding it. I am still in awe of Martha's generosity of spirit in providing such an extraordinary feast and fabulously interesting and entertaining evening!

Before we left, Martha also gave us plates full of leftovers. Now, I happen to be a very big fan of leftovers -- whether I'm re-heating and re-serving or whether I'm transforming an ingredient, it doesn't matter. Leftovers are wonderful ways to remember excellent meals, no matter how they're used.

I had debated greedily saving the salmon for myself and bringing it to work one day for lunch. But my conscience won out and I extended it by using it in a pasta dish to share with Jeremy instead.

I love Dijon mustard, and use it in everything from sandwiches to sauces. And pasta sauce is no exception -- especially when I was making a creamy sauce, rather than a tomato sauce. I took some butter, some mustard, some soy creamer (what we had on hand), and the salmon, and turned them into a rich sauce to pour over curly pasta. Jeremy -- who is not normally a fish eater -- told me he'd eat salmon every day if I'd serve it like that!

So many, many thanks to Martha for the truly extraordinary evening! And much credit to her, as well, for her expert grilling technique. I wonder if Jeremy would like this dish as much without that remarkable charcoal-infused flavor in the fish ...? It might be that Martha's skill, rather than mine, is what made him love it so!

Bring a stockpot of salted water to boil, then add the pasta and the carrot; cook for 9 minutes, adding the peas for the last minute of cooking, then drain.

Meanwhile, heat the butter and the mustard together in a large skillet until the butter melts. 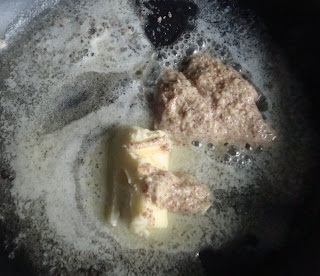 Stir in the creamer and the salt; whisk to combine. 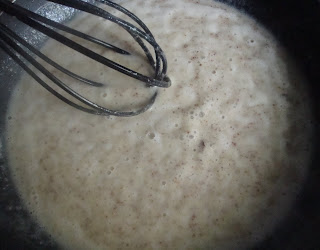 Flake the salmon and stir it into the sauce. 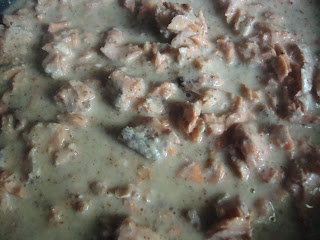 Pour the sauce over the drained pasta, and sprinkle with parmesan to taste.

It is hard not to stop and photograph EVERYTHING to share! :-)

I think I'm with Jeremy on his review of this dish! I love salmon, especially grilled salmon, and your sauce sounds delicious. What a fun dinner party, huh! :-) How nice of your friend to send 'doggie bags' home with you!

I'm with you.. I love Dijon...and I love it even more in pasta sauces! This meal looks wonderful. I dig your love for leftovers, most people, including myself for the most part, wrinkle their nose at them. I need to take a lesson from you and create something wonderful and new with them!

There's nothing better than spending an evening with friends and good food. Sounds like you had BOTH covered! Great use of the left over salmon, too. I'm not a fish fan however it still sounds really good :)

Good times with friends make the meal, but when the food is also delicious, that makes the evening. Thanks for sharing.

That one is a winner. Great recipe.

That looks delish! I just adore all the recipe you post! YUM.

P.S. Yenta doll you have been tagged! See the details over on my blog!

Friends, food, fun! the perfect trifecta! I love what you did with the leftovers to make a delicious dish on its own! Thanks for sharing with us at the hearth and soul hop!

How long do you leave the salmon in the sauce? Just until you get it all flaked in there or what? Idiot cooks need to know. And send me an email b/c I will forget to come back and check this page. Although, I will save it to my favorites. So, if you update the page I can print it out and not have to refer back to the email (again). It is horrible when you lose your mind.

Genius! Never thought of using mustard in this way. Even tho I make one of the best ceasar salads in the universe (small brag) and of course it works wonderfully in that. I can always count on you to shed new light on any subject having to do with Jewish Holidays and or food. Love it. No wonder Tom's such a great guy. He LIKES women! Yay, Tom..

Ha! I love this. I never can understand the people who don't "do" leftovers. They're the best way I know to speed through cooking. Thanks for sharing with the Hearth and Soul hop.

Have no fears, Robin -- I generously refer to my own feeble memory as "The Sieve That Is My Brain." I can truly go into the kitchen and not remember why, or walk down the corridor and work and completely forget to pick up whatever I printed out. So I'll email you, too! Since the salmon is cooked, it just needs to sit in the sauce long enough to be heated through -- 5 minutes or so, just while finishing everything ....

Great use of leftovers. It was nice of you to share. Sounds delish.

What a wondeful friend and feast, and how generous that she gave you leftovers to take home - and I see that you did the feast justice by turning the leftovers into something equally wonderful.
Sue

Hey Yenta Mary, I adore sharing food with friends like that! What a wonderful thing it is to have that fellowship and love and all that rolled into a meal with good people you truly care about! Then, the left overs turn to magic because you are thinking about all the good time you had! Awesome! Thanks so much for sharing on the hearth and soul hop today! Alex@amoderatelife