I ate breakfast at Tom's a few mornings ago, and was in the mood for oatmeal. My beloved is very much a creature of habit who eats rye or whole grain toast with peanut butter every morning, accompanied by oatmeal.

For ease, I used to join in that comfort food ritual; but I have to admit that I am not someone who wants to see the same food every day. (Jeremy, despite being a good eater, would be happy with 3 or 4 core foods too ... men!) For breakfast, I'll eat cheese with fruit, leftover beef stew, yogurt with granola, eggs, hot dogs -- whatever strikes my fancy. But after a long hiatus, the other day oatmeal just sounded good. 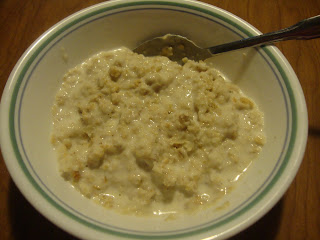 So I made some of the Meijer-brand instant oatmeal that was in the cupboard. At home I would toss in some dried fruit and a sprinkling of cinnamon, but Tom didn't have either. It was pretty bland -- frankly, it was kinda pasty. I'd say it was like paste, but it was so bad that such a comparison would actually be an insult to the fine product that Elmer's makes.

So I sprinkled on some Trader Joe's maple almond granola, which I love ... and yet, that only turned out to be a waste of some exceptionally good cold cereal. I poured on a bit of half-and-half, because how could fatty cream do any harm??? Well ... let's just say that nothing could redeem this bowl of oatmeal.

That is, until Tom suggested that perhaps I should recycle it into a batch of cookie dough. And I thought of the Oatmeal Raisin Muffins I'd made recently. Or how 'bout some oatmeal pancakes topped with homemade spiced applesauce? But once I got home from work, I felt like baking bread. And before I could even say "I think I'll bake some bread" as I told Jeremy the saga, he said "You should make your Honey Oat Bread." Serendipity!

And so, here is how you take a very bad product and a sadly disappointing breakfast and resurrect it by magically transforming it into two different breads which are not only edible (an accomplishment not to be underestimated!) but truly delicious ....

In a large bowl, combine yeast and soy milk; let rest 5 minutes until mixture is puffy. Stir in water, oatmeal, honey, salt, 4 cups whole wheat flour, and white flour. Grease another large bowl and place the very soft dough into the new bowl; cover with plastic wrap and with a dish towel, and place into the oven for 1 hour.

Punch down the dough and sprinkle the countertop with about 1/2 cup more whole wheat flour. Knead the dough to incorporate the flour, adding a bit more if needed to keep the dough from sticking. Divide the dough in half.

Grease two 8"x4" glass loaf pans. Take one half of the dough and form it into an oval loaf shape to make the Honey Oat Bread; place into one of the prepared loaf pans.

Roll the other half of the dough out into a rectangle about 12" x 10". Spread with the butter. 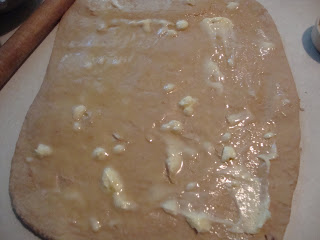 Combine the brown sugar and cinnamon; sprinkle the sugar mixture over the butter. 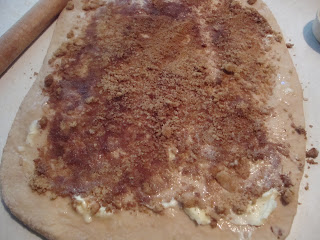 Roll up the dough into a spiral to form the Cinnamon Swirl Bread, and place into the other loaf pan. 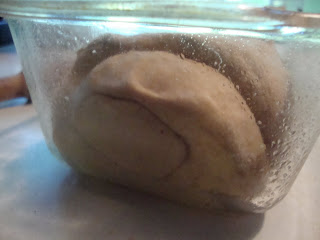 Place the loaf pans back into the oven and let dough rise for 45 minutes. Raise heat to 350F and bake loaves for 45 minutes until golden brown. Let bread rest in the pans for 5 minutes, then remove them and place them on a rack to cool. Makes 2 loaves. You know, if I ever find myself in your neighborhood - I am totally stopping by for lunch! ;-)

I need to start thinking more outside of the box with leftovers too...I tend to throw something away and think about it afterwards and say...crap, I could have used that for ___________!! I love bread and this looks wonderful!

Very clever! And so is the title to your post this morning. :-) I wish my husband loved baked goods so I could surprise him with something yummy like that - Alas, he only has eyes for popcorn. And he prefers to make it himself. :-) I'm sure I should be thankful, right?

What a great way to redeem a disappointing breakfast.

I've never seen a baking recipe that called for the oatmeal to be prepared. I imagine it makes for a heavier, more filling bread. Almost like a coffee cake.

I have never been much of a breakfast food girl myself, except for maybe a hot fluffy pancake once in awhile. My favorite is leftover soup and crackers or spaghetti. I know, weird but delicious. This bread looks great. I promise to give it a try next time I think of buying yeast!

Now that's what I call recycling...nice! It sounds delicious...so glad you shared it with the hearth and soul hop this week, Mary =)

So, did you eat anything for breakfast or did you just do without?

Oh Yenta Mary, you are so like me-i mix things in and create new things--there is no such things as left overs--only Precursors to something better! What a wonderful idea and glad you got your final redemption! Thanks so much for sharing on the hearth and soul hop this week. Always lovely to see you! Alex@amoderatelife

I'm a grits eater, and some people say if you like grits you don't like oatmeal. I'd be one of those! But I've got my 2-year-old eating both, and he prefers maple cinnamon. No surprise there... Just hand me a piece of that fabulous bread!

What a great idea, Mary! You continue to inspire me every day! Thank you!

Thanks for sharing with the Hearth and Soul hop this week. I'm the type to eat any old thing out of the fridge for breaky, too, but I appreciate people who have a ritual.

You are definitely a creative cook!! I would have just pitched the bowl - because, well I wouldn't have thought to bake bread with it!! Thanks for sharing this with us at the hearth and soul hop!