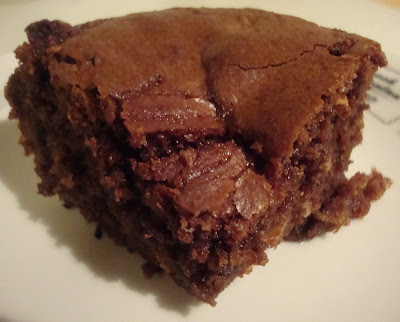 "I have only two words to describe these," Tom said when he tried my Friday night brownie experiment: "Hot damn!" He -- the most disciplined eater I know, a former vegan and vegetarian, a man who enjoys food but treats it more like fuel than entertainment -- proceeded to eat two of them. This is unheard of! You should have joined us for dinner just to witness it!

I was in a reasonably new store last week, which sells only oils and vinegars. It's called Fustini's, and I'm proud to say that it is a Michigan-based chain (with other stores in Holland, Petoskey and Traverse City). Oh, it's open and bright and the staff is wonderfully welcoming. There are small vats on display, with little plastic cups just waiting to help you sample the wares. And truly, you could sample every single item if you wanted to -- I've managed to get through about half of the offerings already without any effort to shoo me away.

So far, I've found a balsamic vinegar named "Better Than Chocolate" that is so sweet and rich that I could drink it straight. I combined a bright and vibrant lemon-flavored olive oil with a subtle and slightly perfumed violet vinegar to find that they complemented each other perfectly. One of my absolute favorites was the cherry vinegar, tart and luscious. Oh, the salads! The marinades! The sauces! How much fun could I have with some of these products??? I've already dropped some downright-obvious (why be subtle?) hints with Tom and Jeremy that some holiday gifts from this charming little store would be most gratefully appreciated.

Then, after leaving, I had a potential epiphany ... and that's where my Friday night experiment comes in.

The woman I'd spoken with when I first found the shop told me that she likes to enhance cake mixes by infusing them with some of the wares she sells. And so, later I thought: "If I usually bake a vegan chocolate cake using apple cider vinegar and baking soda for leavening, then why not use one of those flavored vinegars to really perk up the flavor???" But I've been more in the mood for brownies lately, so then I thought I could substitute a flavored vinegar for vanilla extract or coffee or maraschino cherry juice, or any of the other liquids I usually add to the batter.

I still had some of the gorgeous blood orange vinegar I'd bought at Fox and Obel in Chicago when Jeremy and I were there in June -- it would be perfect! And I could use an orange-flavored chocolate, rather than plain ol' baking chocolate or chocolate chips. And -- it gets better! -- I could swirl in some orange marmalade, a technique I sometimes use with raspberry jam. The wheels in my brain, they were a-spinnin'!

So on Friday night, as Tom put his brand new rice cooker to work and made a lovely dinner of Cuban rice and beans with cheese, I stirred up a variation on my usual brownie batter. The brownies baked as we ate, and smelled absolutely divine.

Impatient people that we are, we didn't wait for the brownies to cool; they were a bit messier for still being warm when I cut them, but who cares about the appearance of a dessert that's about to disappear anyway???

So we each took a brownie and sat down on the sofa. We took a taste, and Tom uttered his above-stated phrase upon experiencing the luscious, warm, moist, rich chocolate which was scented and enhanced with orange. He then stated: "You'd better tell your readers that they have to make this! I'll hunt them down if they don't! They must make these brownies!"

And so, this is your mission should you choose to accept it. I don't know how readily you can find orange vinegar in your town, but it's worth any hunting you may have to do to procure it. (I'm sure you could also use fresh orange juice or some liqueur, as well.) Orange marmalade is easy to find, but finding one that isn't nearly entirely made of high fructose corn syrup may be a challenge. (I actually found some at a dollar store, of all places -- the best ingredients of any brand I'd looked at, at the dollar store!) And Lindt chocolate should be easy to find; I was lucky that it was on sale last week, just waiting for my little project.

I happen to be a devoted worshipper of chocolate and, particularly, of brownies. And I have to say, immodest as it sounds, that these are just about the best brownies I've ever eaten ... I know they're the best ones I've ever baked.

So take Tom's advice. Bake some Triple Orange Brownies for holiday gifts. Bake them for a tree-trimming party. Bake them to reward yourself for finishing your Christmas shopping. Bake them simply because it's Monday! Just bake them. You'll thank me, I promise ....

Preheat the oven to 350F. Grease and flour an 8" square baking pan.

In a medium saucepan, melt the butter and chocolate together over low heat, stirring frequently. 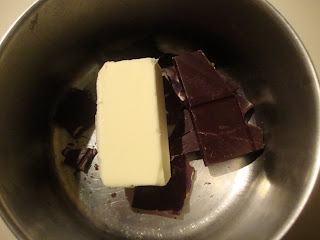 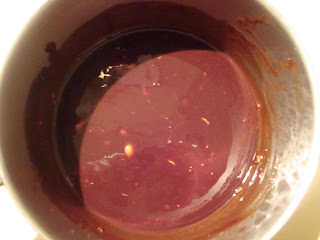 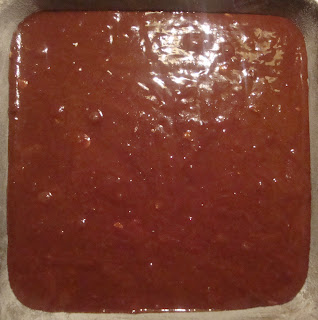 Place dollops of the marmalade over the top of the batter, then gently swirl them into the batter just a bit. 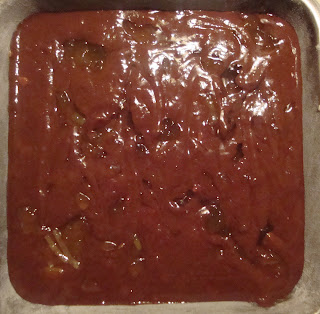 Bake for 30 minutes without peeking, then let cool a bit before serving. (FYI: I added no nuts to the batter, though Tom and I had talked about adding walnuts and they would make a good addition. The chocolate bar contains tidbits of almonds, and one is peeking out in the picture below.) 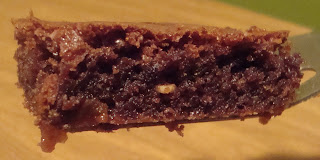 So, when I saw the very first photo above, I have to actually tell you that a bit of jealousy came over me when I realized that I COULDN'T REACH IN and EAT THESE right off of the screen!! (It's JUST NOT FAIR!) I have to admit, though, that blog-eating is far less dangerous for my bottom than actual eating!! ;)

These look SO SCRUMPTIOUS! LOVE them!

I am a new follower. I hope you will follow me back.
Nancy
www.findingblessingsineverydaylife.blogspot.com

O. M. G. Now I have to find some orange vinegar.

Your husband is right - i DO need to make these!

You come up with the most interesting things!! Who knew that Michigan could be so exciting. LOL Tell Tom not to try to track me down, I'm going to make those brownies. They look delish! And to think a former vegetarian would be eating brownies. There's just something about that that makes me smile. :-)

That sounds and looks delish!! Too bad I can't have it because of the gestational diabetes. Maybe after baby is born I will attempt to make!! Yummy!!

YUMMY! Thanks for linking up at Making Friends Monday! I am now following you. I hope you have a great week! www.livingonloveandcents.blogspot.com

Can you just FedEx me a few of those, please? It doesn't have to be the whole pan, just half :) YUM!!!

OMGeeeeeeeeeeeeeeeeeeeeee! I am on South Beach and I sooo want these. Can you make them and ship 'em to me? Thanks for stopping by Peaceful Divas last week!

I love the orange chocolate. This is such a wonderful combination.

I found the orange vinegar in Ann Arbor recently -- at the Sparrow Market at Kerrytown ... :)