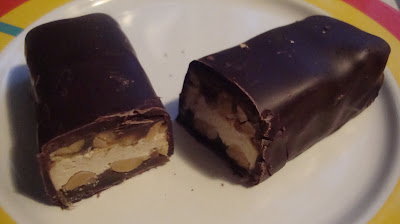 A couple of weeks ago, when I got to spend the afternoon with the fabulous cookbook author Joan Nathan before her appearance at the Jewish Book Festival, I was one of two attendants during her book signing at the famous Zingerman's Deli. The other was a very charming young man named Freddy Rosenthal, who works in sales for Zingerman's Candy Manufactory.

While waiting for devoted fans to come in at the appointed time (and one of these was a woman who drove an hour from Toledo just for the occasion!), Joan was trying to decide what gifts to send to her children from one of her very favorite food shops. She looked at the counters, she perused the catalogue, and Freddy very patiently helped her to sort through all the amazing options.

Joan had specifically asked what new items there might be since her last visit to Ann Arbor, oh, maybe 5 years earlier. Candy bars. Chocolate bars. Rich, thick, delicious candy bars that one woman, who was bringing cookbooks to the table for ready signing, described as "what a Snickers wants to be when it grows up." Zzang! Bars.

Well, that certainly sounded intriguing! So Freddy went off to bring Joan a sample ... and kind, sweet gentleman that he is, he brought one for me, too. I, of course, was going to be headed to dinner at eve an hour later; and I also had Tom and Jeremy to share my prize with, so I saved it until it could be properly savored. But Freddy had also brought a bar that he'd cut into pieces for tasting, and I have to say that it was exceptional!

Zzang!® Original
Charlie starts with honey nougat made with natural peanut butter. He rolls it up in a silky caramel made from organic muscovado brown sugar. The biggest and best Virginia peanuts come next, and the whole endeavor's finished off with a hand dip into a rich bath of 64 percent dark Ecuadorian chocolate.
Are you sorely tempted now, or what???

If you can't find Zzang! Bars in your area, click here and order them online. Yeah, they're a bit pricey at $6 each -- even Joan thought they sounded a bit expensive. But truly, they are worth every one of those pennies and would make fabulous holiday gifts ... trust me. I wouldn't encourage you to spend that much on a chocolate bar unless it really would be exceptional. Jeremy told me that he thinks it's the best candy he's ever eaten ....

Hi Mary :) My they do sound yummy. But alas, at that price I will only have to dream. :)

I have never heard of Zzang! bars...OMG they look soo good.. it's like a snickers only better!!! YUM!

I think it would make a fabulous birthday present!

P.S. My birthday's in August. LOL

I am suddenly craving chocolate!

I just wanted to pop in and say a very big "Thank you" for your sweet birthday message. Your comment really meant a lot to me! I am so sorry it has take me so long to visit, but I had a great week celebrating and breaking in my new KitchenAid!

I hope your weekend is fabulous!

It sounds like I need to buy some, I'm such a sucker when it comes to sweets. I can't help myself :). Have a good weekend! Miriam@Meatless Meals For Meat Eaters

Hale Mary, full of grace and great foodie info such as this. You're awesome. Keri

Hi Floozie, I just stumbled over here looking for this candy bar... love this post and your site!