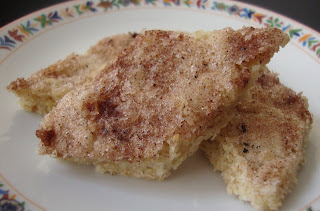 I am thrilled to announce that this post was named one of the daily "Best of the Blogs" by the prestigious Food News Journal on January 26, 2011!!!


My maternal grandmother was always extraordinarily proud of being Scottish, and of being descended not just from MacGregors but from the Rob Roy branch of the MacGregors. So, having been raised to bask in this heritage (though it's just one of many facets to my mutt-dom), today is a holiday which I celebrate every year: Robbie Burns Day.

Robert Burns was an 18th century poet whose most famous lines are undoubtedly the lyrics to Auld Lang Syne. He was a hero to the Scots, who celebrate his birthday every January 25 with special Burns Suppers that most notably feature haggis -- a dish, according to Wikipedia, "containing sheep's 'pluck' (heart, liver and lungs), minced with onion, oatmeal, suet, spices, and salt, mixed with stock, and traditionally simmered in the animal's stomach for approximately three hours. Most modern commercial haggis is prepared in a casing rather than an actual stomach." Yum!!!

In all honesty, I have never tried haggis ... and I'm not ashamed to admit that it's not on my "to do" list, either. Instead, I prefer to celebrate with shortbread cookies, an infinitely more delicious representative of Scottish cuisine!

Oats are a staple in Scotland, even though Samuel Johnson once referred to them as: "A grain which in England is generally given to horses, but in Scotland supports the people." And Scottish chef John Quigley has called shortbread "the jewel in the crown" of Scottish baked goods. So, why not combine them into a perfect little treat???

Delicious with a cup of cocoa or tea, these cookies are an ideal way to celebrate a literary birthday on a cold winter day ....

The wintry west extends his blast,
And hail and rain does blaw;
Or the stormy north sends driving forth
The blinding sleet and snaw:
While, tumbling brown, the burn comes down,
And roars frae bank to brae;
And bird and beast in covert rest,
And pass the heartless day.

"The sweeping blast, the sky o'ercast,"
The joyless winter day
Let others fear, to me more dear
Than all the pride of May:
The tempest's howl, it soothes my soul,
My griefs it seems to join;
The leafless trees my fancy please,
Their fate resembles mine!

Thou Power Supreme, whose mighty scheme
These woes of mine fulfil,
Here firm I rest; they must be best,
Because they are Thy will!
Then all I want - O do Thou grant
This one request of mine! -
Since to enjoy Thou dost deny,
Assist me to resign.

In a mixing bowl, cream together butter and 1/3 cup sugar; stir in egg. Add oats, flour and salt; mix well. Press into the prepared pan.

Combine 1 tablespoon sugar with cinnamon; sprinkle over the batter. Bake for 25 minutes until shortbread is set when pressed lightly.

These look sooo yummy! Thanks for sharing, and thanks for linking up to my give away :) I'll cross my fingers for ya, lol.

Candace from Clan Donald over here! I have everything in my kitchen to make these so I'm adding them to my "to be baked" list. We were just talking about the offal aka "awful" parts of the sheep and whether or not I would try haggis. I told my father-in-law that he would have to be serving cocktails prior to serving me haggis for dinner. No thank you! :)

Those look lovely!!! I love the cinnamon and sugar top!
I have never had haggis either...and I'm with you.. don't really have it on my agenda to try either.. UGH!

Sounds good. My grandmother in law is Scottish. I'll have to ask her about this. Newest follower.

I have no idea what an unbleached flour is but to me this recipe looks delicious. I haven't tried any Scottish dish.

Thank you and happy tuesday!

You really should try haggis. It tastes better than kishka.

I love you for this recipe!! Great poem :). Miriam@Meatless Meals For Meat Eaters

Scottish Shortbread made with oatmeal?? This is an attack of delicious in its finest! They look absolutely divine Mary, I'll be making these soon!

Mary, could you read me the Burns poem with a Scottish accent? I would listen to anyone for hours if they can sound like a Scot. :-) I'd read of the Burns Suppers in one of the British magazines at Borders. So fascinating! And I'll have to try this Scottish shortbread, for I was quite disappointed in Scottish oatmeal cakes. They reminded me a bit of beaver board. I trust you, Mary, to only steer me toward outstanding cuisine. :-)

I love that you celebrate your mutt-dom! I try to, as well...you never know what little parts are hiding out in there ;) I love the sound of this Scottish shortbread...and am pretty positive I'd prefer it to haggis. Absolutely positive. Thanks so much for sharing this w/ the hearth and soul hop this week, Mary!

Yes. I have to agree, the shortbreads are just a lil'bit more appealing than the haggis.

And your discriptions of haggis?

Love the post. Who knew you were of the Scotts. Me Too.. hey I used to be a Kirkpatrick!

I'm with you, no to Haggis, yes to shortbread! This sound delicious.

Yenta Mary!!!!! YOU made the FOOD NEWS JOURNAL today!!!! I am SOOO proud of you! this is HUGE! Here is the link to their front page!

CONGRATULATIONS! you made the big time! hugs! Alex

p.s. just letting you know I will also share your recipe on my thoughts on friday link love at a moderate life cause it really is an awesome recipe for one of my favorite tea time treats! Thanks for sharing it with us on the hearth and soul hop this week! all the best! I am jumping up and down for you! :) Alex