The Complete Idiot's Guide to Wine Tasting for Dummies 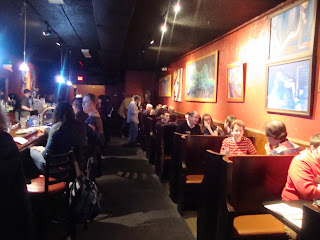 Last week, I won two tickets to (un)Corked, a fabulous wine tasting sponsored by The Produce Station (a lovely gourmet market and wine shop here in Ann Arbor) and hosted by the Alley Bar. The focus of this month's event was The Many Faces of Sangiovese -- Italian wines lovingly produced with grapes "named after the blood of Jove" (according to the promotional copy).

Now, anyone who knows me knows that I don't drink -- the last glass of wine I had was a half-glass of Asti at Tom's niece's wedding in July. When one spends 18 years married to an alcoholic (who spent 13 of those years sober, much to his credit!), one kinda loses a taste for anything with even a hint of alcohol to it. You learn to cook without wine, so as not to have it in the house. In fact, that's how I got started with my hobby of entering cooking contests -- by submitting a non-alcholic drink I'd developed after my ex's stint in rehab (a white chocolate cocoa) to a contest seeking festive holiday recipes to encourage having fun without the risk of drinking and driving. Since I've been divorced, though, there's no reason that I can't drink ... it's just not something I do very often at all.

So when I saw the Produce Station's tweet that retweeting about the (un)Corked event might win a lucky person some tickets, I thought: "Hey, it sounds like a good time! At a bare minimum, I'll promote a local business and its evening of entertainment. And who knows ...? Someone has to win, after all!"

And the next thing I knew, I had won!

So Tom and I went to the Alley Bar last Thursday night (the events are held on the first Thursday of each month, and are a tremendous value at only $10/person), and were greeted by an incredibly friendly and most enthusiastic Andy of The Produce Station. We chose our booth -- which welcomed us with sliced baguettes from Detroit's Avalon International Breads as well as slightly tart and creamier-than-butter Pyramid Pointe goat's milk cheese from Evergreen Lane Farm & Creamery in Fennville -- and waited with excitement and anticipation. Neither of us had ever been to a wine tasting before, and weren't quite sure what to expect other than the obvious.

The place filled up quickly, and we were introduced to our wine expert extraordinaire -- Jorge -- who went around the room with Andy filling everyone's glasses. Fortunately, each table also offered tasting notes, so that we were given a bit of information about each wine in addition to having room to scribble our own thoughts. 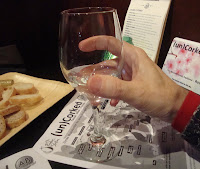 The first wine we tried was a 2009 Fattoria Colmone della Marca 'Bianco del Moro', Marche ($21.99/bottle) -- a white wine. I once heard someone say that Italians will only drink white wine once the red is all gone, dismissing white varieties as inferior. But this one was absolutely lovely! We gave it a vigorous swirl -- as Jorge had shown us how to do when I asked about the proper protocol -- and then buried our noses deep into our glasses to immerse ourselves in the fragrance. The next step was to take 2-3 sips, letting the wine roll over our tongues and around our mouths for 10-15 seconds, hitting each point and experiencing something different at every one.

Jorge tapped his glass to shush everyone (I told Tom this is where we're supposed to kiss, like a bride and groom at a wedding!), and then proceeded to explain a bit about the wine. I was so impressed that he spoke with great knowledge, but without any pretense at all. Clearly he is devoted to his passion in life and wants to share it with others, educating those of us in desperate need rather than shunning us for our ignorance. This made the evening great, great fun, as one could be knowledgeable or not with no minimum requirement -- the only important criterion was to come ready to taste and to learn!

The Bianco del Moro was made from grapes grown particularly in Central Italy, and it was very light in color, taste and potency. It was very tart (the tasting notes emphasize "its sharp acidity"), very fruity ("red berries, cotton candy, hazelnuts and white peach ... takes on a marzipan tone on palate"), and the sides of my tongue tingled after I swallowed. I would absolutely drink this one again, if offered an opportunity! 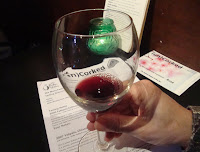 Next was a 2007 Volpaia Chianti Classico ($19.99/bottle) -- a good old-fashioned traditional Italian red wine. Jorge told us that this had been "a good year, but difficult" in terms of the growing season; but the wine turned out to be "very elegant" in his opinion. It was light, not robust, and a "pretty, well-balanced wine" (per the tasting notes). It's made with 90% Sangiovese grapes, but some Merlot and Syrah are permitted to be mixed in as well. The Chianti was very astringent, which Jorge told us was "necessary" as a complement to food. It smelled very rich after we swirled it, with hints of cheese and minerals, and tasted very fruity. Another I would drink again, if given the chance! 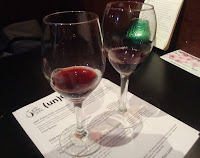 Moving right along, we then tried a 2007 Flavio Fanti "La Palazzetta" Rosso di Montalcino ($23.99/bottle) which almost seemed to have hints of ash in its aroma -- it definitely wasn't sweet. Upon tasting, we found that it was a bit tart, and the back of my tongue tingled for a moment after swallowing.

Jorge pointed out that it shows a "nutty quality" (at which point a very out-of-place biker dude with a tall can of beer -- complete with Harley t-shirt and cap -- yelled out "I'm a nut, and my wife thinks I'm a nut!"). And the tasting notes highlight "tremendous amounts of plum, red cherries, floral elements, vanillin and absolute licorice" which make the wine "extremely complex and luscious."

Andy came by our table to ask which of the selections we'd liked, and agreed with us that this was the favorite so far ... it was truly exceptional! I had visions of serving it with a hearty pasta sauce I make (the recipe for which is rumored to have Mafia connections ... shhhh) that features meatballs, sausage and pork in a rich tomato base. 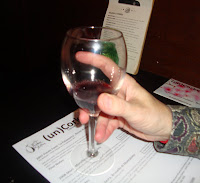 The third wine's status as our favorite didn't last very long, however, as we moved on to our fourth selection -- a 2008 Moris, Morellino di Scansano ($15.99/bottle) which was noticably richer than the previous one. It had a very deep flavor laden with fruit; the notes described it as possessing "generous fruitiness" and showcasing "a darker face of Sangiovese." This wine from Tuscany had been bottled after a mere 8 months, when most of its variety would have waited anywhere from 12 months to 3 years.

I said "I like this very much," and Tom immediately replied, "Me, too!" He also told me that it "left a presence of cookie ice cream" on his palate, although I felt it had an almost smoky aftertaste. This wine should be savored with a simple plate of rich cheese and good bread, rather than with anything more substantial that would compete with it for attention. 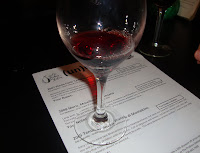 Finally, we tried a wine that should really have been an investment, one given a special place of honor for a patient wait as it evolves towards its full potential: a 2005 Tenuta di Sesta, Brunello di Montalcino ($49.99/bottle). As he poured it, Jorge pronounced that "we're committing infanticide," and the tasting notes told us that it "deserves at least another 7 years in (the) cellar" for "the rewards (to be) plentiful."

But it was important to try this "fabulous wine" nonetheless, representative as it was of the Brunello grape from Tuscany and "full of elegance and finesse." The wine was noticeably lighter and thinner than the previous ones, both in color and in flavor. It lacked depth, and was very astringent upon the first sip; it stung the sides of my tongue. It was nice, but it was also abundantly clear that it needed more time to mellow and to become richer.

Once the tasting was over, we offered our enthusiastic thanks to Andy for the opportunity to have joined such a great party. Unfortunately, Jorge was deeply involved in a conversation at the table next to ours, but I wish we could have thanked him for sharing so much knowledge in such an informal and welcoming way.

I would love to attend another session of (un)Corked, and recommend the event with a rousing endorsement. "The Misunderstood, Explained -- Rose" will be held at 7:30 p.m. on Thursday, May 5 at the Alley Bar, and I wholeheartedly encourage you to go! Women who'd clearly come from the office, retirees, Gen X-ers ... the tasting welcomed anyone who could be there legally. Whether you know a lot about wine or are as desperately in need of instruction as I am, I promise that you will have a fabulous time.

What a fun time you had, Mary! I hope you get to go again. I did my first and only wine tasting on a vineyard tour that David took me on for my birthday last year. It was so much fun. I don't know a lot about wine except that I like it....a lot. :)

What an absolutely awesome idea! And as a fundraiser, too cool! I love it. I am no wine expert, but I really love trying new wines. Too fun. Glad ya'll had a great time!

How fun! I've been to wine tastings before...they are a blast. I love being able to taste wines I would probably never think to buy!

Sounds like you had fun! I wish you had kissed each time Jorge tapped the glass. well, maybe not. I thought it was funny that Tom thought 'cookie ice cream' and you thought 'smoky.' That's very hard to reconcile. LOL Burned cookies?? So glad you won the tickets.

That sounds like so much fun!! What a great way to learn information and spend time with your sweetie :) $10 a head is dirt cheap for those wines, wow!!! Wishing I was closer to Ann Arbor so I could attend one of those classes.

What a fun evening Mary. This is what I need to do to step out of my box too. I've got my favorite wine and that's all I buy. I hate the think of what I might be missing by not trying anything new.