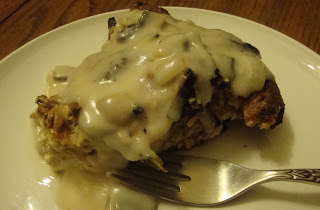 I love bread pudding, and make some -- if I may say so myself! -- pretty exceptional (and prize-winning) dessert versions, loaded with varieties of chocolate chips and with flavored cocoa mixes added to the custard.

And so, for dinner one night Tom and I took some whole wheat English muffins that had been staring out of my refrigerator for awhile, begging for a reason to justify their existence ... the lingering asparagi ... a small scrap of cheese that had been hanging around since St. Paddy's Day ... and we turned it all into a magnificent feast!

I also had a lot of half-and-half that had originally been intended for some other concoction -- I can't even remember what, anymore -- which never materialized. So it found its way into a gravy that was not only a perfect complement to the pudding, but which would also be exceptional with meatloaf, with chicken, over pasta ... sigh.

This is a quick, easy, and delicious meal whose beauty is completely and totally greater than the sum of its parts.

In a large bowl, combine eggs, salt, pepper, milk, half-and-half and mustard. Add the English muffin pieces and soak for 10 minutes, stirring and pressing down occasionally so that the custard is absorbed a bit. 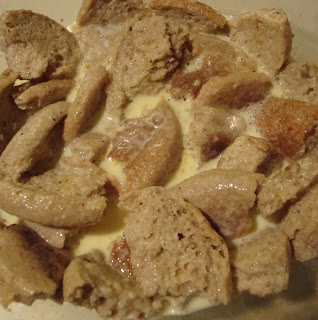 Stir in the asparagus, and place the mixture into the pie pan. Sprinkle the cheese on top, and bake for 35 minutes until the pudding is browned and puffed up, and a knife inserted in the center comes out clean. 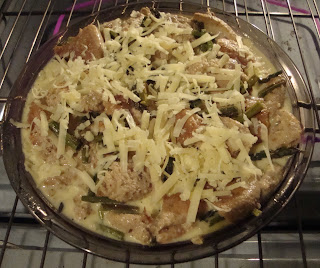 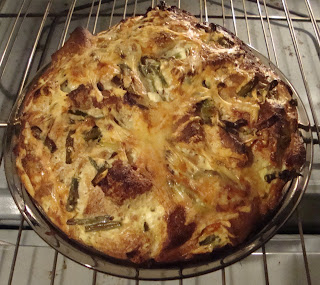 While the pudding is in the oven, make the gravy. Melt 3 tablespoons butter in a medium saucepan over medium-high heat. Add the onion, the mushrooms, the salt, lemon pepper and pepper flakes; cook for 2-3 minutes until the mushrooms are softening, then add the remaining butter and cook until it melts.

Stir in the flour and coat everything with it. Combine the wine, milk and half-and-half; slowly pour over the mushroom mixture, stirring to incorporate the liquid with each pour, before adding the next increment. When the liquid has all been added, let the gravy come to a boil; then lower heat to medium-low and cook, stirring frequently, until the bread pudding is ready.

Cut the bread pudding into 8 servings, and pour gravy over the top of each portion to serve.

Would you believe that I've never eaten savory bread pudding? With asparagus, mushrooms, cheese and gravy, how can I resist? This looks fabulous, Mary! Have a wonderful weekend!

Your refrigerator sounds a lot like mine. I try to never let bread go to waste by making breadcrumbs or croutons but I've never made a savory bread pudding. I'll have to give this a try next time I have elderly hot dog or hamburger buns looking for a purpose. Great recipe.

I have never eaten any kind of bread pudding and even the title doesn't entice me. But the finished product, as you said, is more beautiful than the sum of its parts. It looks fantastic!

Ok, THIS one has me drooling like crazy! Oh, how I wish I lived closer and could just 'pop' in when I smell the yummy food coming from your place! I'm all over this one . . . you inspire me!!!

I am drooling! I bookmarked this to make for one of my mommies lunch! www.mylifeunzipped.blogspot.com

Thanks for linking up to Foodie Friday. This looks wonderful!!

I've made lots of bread pudding in my time too...love the stuff..but never a savory one...this LOOKS fantastic!

found you though the foodie friday blog hop! check out my entry too!

Wow, that looks really good! I am going to have to try it!
~Stopping by from Chatty Mommy

Oh My Gosh!!! That Look DELICIOUS!!! Can ya ship some my way???
Happy Friday!

Just visiting from Follow Friday 40 & Over to say "Hello". I'm one of your newest followers. Plz stop by say hello to follow us too.

Have a fun weekend.

Love your corner of the internet :)
I am your newest follower and I'm hopping over from the chatty mommy's blog hop.

What a beautiful bread pudding and an amazing way to use fading items in the fridge. Nice job Mary and thanks!!!