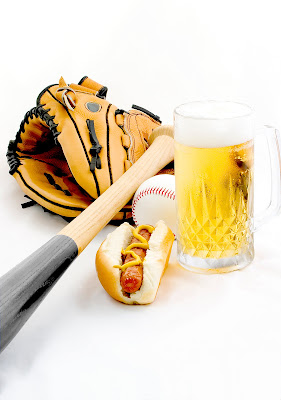 Today is Opening Day of baseball season -- Tigers at Yankees at 1:05 p.m. EDT on ESPN. For a girl who grew up in New York City and who's lived near Detroit for more than 30 years now, this is a primo way to start things off!

Although I'm loathe to admit it -- and I do my very best to keep my grey roots hidden so that folks can't tell my age by counting the silver, the way they count rings in a tree! -- I have to admit that I'm old enough to remember those mid-70s commercials touting All-American icons: baseball, hot dogs, apple pie and Chevrolet.

And each year on Opening Day -- a day which, as far as I'm concerned, should be a national holiday 'cause folks are either playing hooky or watching games on MLB.tv, but they're sure not working! -- I can't help but think of the old ads.

Because I adore baseball -- I was raised on it, going to Mets games (one of my mother's best friends is married to one of their former coaches) ... Yankees games ... and actually being at Yankee Stadium on June 17, 1978 for the game in which Ron Guidry pitched 18 strikeouts to tie the American League record. I think the quadrennial (it should be annual!) World Baseball Classic is one of the greatest things in the entire universe, as I can wake up in the morning to watch a game pitting Japan against China, come home from work and watch Italy play the Netherlands, and then fall asleep watching Cuba play Canada. It just doesn't get much better in my world!

I raised Jeremy on it, too: minor league games, t-ball, Tigers games, even Alaska Baseball League games when we spent part of a summer in Anchorage while my ex-husband did a medical residency rotation at a Native Alaskan treatment center. (The Alaska Baseball League describes itself as "A Premier Summer Collegiate Baseball League Containing Players From Major Colleges Throughout The World".) And any time the University of Michigan's baseball team is playing on Mother's Day, that's where you'll find Jeremy and me -- 1 p.m. on May 8, this year!

I also love apple pie, and I just happen to drive a Chevrolet -- a Chevy Suburban. But my tradition is actually much simpler: hot dogs and Cracker Jacks, those consummate baseball foods. No beer necessary (don't like it at all) but maybe a soda, which I almost never drink, just 'cause it's a celebration!

So, what sorts of unofficial holidays do you celebrate? And how do you do so? Every family has its own traditions, after all, apart from those the rest of society acknowledges; and these are so important to pass along through generations, integral to forming a family identity.

Let me know ... and it's okay if you stop mid-typing to catch a great play or to take a bite of your hot dog while watching the game today. Have no fear -- I'll understand completely ... :)
Posted by Yenta Mary at 12:01 AM

Ohhhhhh!!! I am so excited for baseball season starting up! Even though the hubs might play hockey, we are both huge baseball fans. There is just something about being in the stadium, drinking an over priced beer and watching the lazy but fun pace of the game. We will be watching on TV tonight, but can't wait to get back home to see a live game :)
And I was lucky enough last summer to see a game in the new yankee stadium. Fancy!

Okay, I'm singing that song now, Mary! I'm old enough to remember it, as well. I've never been a huge baseball fan. I liked it but I wasn't passionate about it like I was about football. I adore hot dogs and cracker jacks though. I was just talking to someone last night about Ron Guidry. I always liked to see the Yankees win because he was playing for them. Now....it's all about the Red Sox! :)

I'm a fan of baseball when I can go to a game. I'm sorry to say that they bore me when I watch them on tv. But there truly is nothing like going to an actual game. Our company just went to a spring training game last Friday. Gorgeous weather, fantastic ballpark franks, cold beer, and a really good game (Cubs and Mariners)!
Chris and I's unofficial holiday is any time the boxer Manny Paquio has a fight! lol We celebrate with ribs and coleslaw!!

I couldn't find the post about the Blog Hop, so I am leaving my note here....

BLOG HOPping around - I am now a follower of your blog, wont you also follow me?? ~KM
Krafty Max Originals

Hi!!! I'm stopping by and following from Terrific Thursday Blog Hop. I hope you'll check out my blog Frazzled Mama at http://frazzled-mama.com and follow me back. Have a great day.

Watching the Astros play was a cherished family activity when my kids were young. Any day we were at the ballpark together was a holiday for us.

since i moved from chicago I tend to forget this day but do remember how excited I was, especially when it happens on my birthday...stopping by from the blog hop to say hi. already a follower.