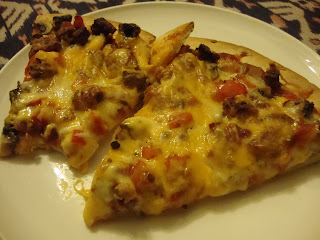 My friend Wendy came over the other night for commisserating about men (oy!!!) and relationships, disappointments and betrayals, plans and goals, hopes and dreams ... BFF stuff, that is. And we wanted something kinda junk food-ish for our evening of ruminating, but without completely sacrificing our health.

I don't eat pizza very often; I love it, but it doesn't generally have a lot of nutritional value with all that yeast and white flour and cheese. But I was having a craving, and was able to more than satisfy it that night even though I was cooking at home and thus had to keep it both vegetarian and kosher.

Now, this was admittedly not one of my handmade masterpieces made with a dough recipe that originated with a man who emigrated from Italy, sauce lovingly tended for hours, imported cheeses ... uh uh. This was just about as close as I get to fast food, using convenience ingredients for the sake of speed.

So, with a prepared pizza crust, a jar of marinara sauce, and several different types of cheese, I set to work. I did use lots of vegetables -- onion, mushrooms, garlic, and red peppers. I also chopped up a couple of vegetarian burgers to give it that "meaty" consistency and texture, since I love both pepperoni and Italian sausage. This pizza was absolutely loaded with stuff on it ... and healthy stuff, too!

Wendy kept commenting on how good the pizza smelled as it baked, and I have to say that I'm pretty proud of the results despite it having been thrown together with ready-made items. We ate some for dinner, I brought some for lunch the next two days ... a small investment of time garnered fabulous results!

This pizza was so good that you could probably have passed it off as a "meat" pizza, and no one would have questioned it. There are enough questions about life and the prospects for happiness without throwing anything else into the mix!

Lay the crust onto a baking sheet, and spoon some sauce over it. Saute the onion, mushrooms, red peppers, garlic and Morningstar Farms patty until the onion is translucent. 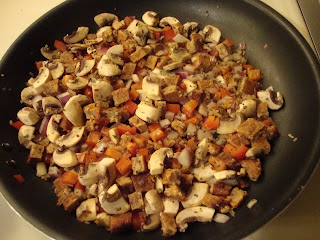 Place the vegetables over the sauce. Top with the cheeses. 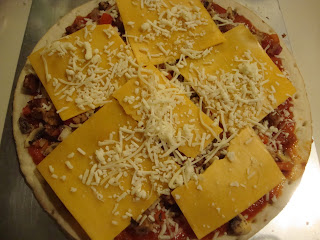 Bake according to the directions on the pizza crust package. 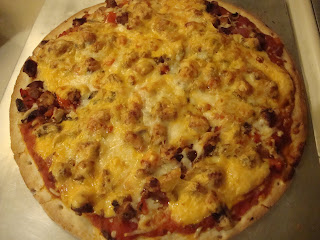 Simply delicious and perfect for a girlie night.

Looks fantastic! I love meals like this from time to time. Simple yet delicious. I like the idea of using the Morninstar burger for a "meaty" veggie pizza. Chris might even eat that!

Looks very yummy. Although you can't do much about cheese in terms of nutritional value, there's always different ways to make a crust.

disclaimer: IANAB (I am not a baker)

Mary, thank you so much for all of the wonderful support.

Your pizza looks sooo good, Mary! I think I might have to have that this weekend. Yum!

This certainly looks tasty to me. And not all good pizza has to have a meat product smiling back at you. I hope you and Wendy made some sense of the world too :)