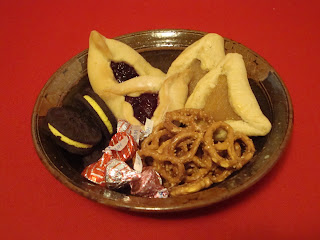 Purim [POOR-im], the happiest day on the Jewish calendar, was celebrated from Saturday night through Sunday with shpiels (comical plays), costumes, groggers (obnoxious noisemakers), and lots of festivity. As the old Jewish joke goes: "They tried to kill us, we survived, let's eat!"

The Cliff's Notes version of the Purim story is that Esther married the King of Persia, whose vizier, Haman, wanted to annihilate the Jews. No one in the royal court knew that Esther was Jewish; so when she found out about Haman's plan, she fasted -- eating only nuts and seeds -- as she tried to decide whether to reveal herself as a Jew and risk being murdered or to try to save her people. She ultimately told her husband of her heritage and of the plot against the Jews, the king executed Haman, and the Jews were saved. Thus, Purim celebrations involve costumes for hiding one's identity, poppy seed-filled cookies to remember the fast, and reading the Book of Esther aloud while everyone makes as much noise as possible to drown out the name of Haman every time it's mentioned. Purim is raucous and chaotic, but it is a lot of fun!

It is traditional to give mishloach manot [mish-lo-AHK mah-NOTE], which are goodie bags, to friends and family members. As with everything else in Judaism, there has been much debate about this over the millennia -- what to put in, how much to put in, etc. So it's generally accepted that there be 1 sweet item and 1 savory item, and that the foods be ready to eat. 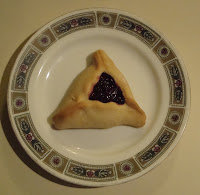 It is also simply a given that the mishloach manot will contain hamantaschen [hah-men-TAHSH-en] -- triangular-shaped filled cookies resembling either the ears or the hat of Haman, that consummate villain in the Purim story. My recipe, and this year's saga of trying to get the hamantaschen made (OY!!!), will be tomorrow's post ... same Bat time, same Bat channel! 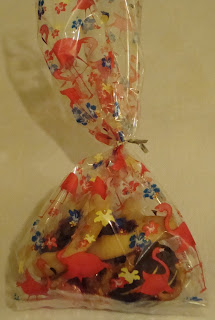 But not everything about the holiday is joyful. On a more serious note, Jews are “to observe [Purim] as days of feasting and merry-making, and as an occasion of sending portions of food to one another and gifts to the poor.” (Megillat Esther 9:22) The legendary Torah scholar Maimonides taught that contributing to the care of the poor is the primary mitzvah ([MITZ-vuh] = commandment, good deed) of Purim. So it is essential, in addition to having fun and eating too many hamantaschen, to also make donations to favorite charities.

Stay tuned 'til tomorrow to read about trying to get the hamantaschen made -- it was an exercise in insanity: engaging in the same behaviors while expecting different results. But I overcame! The hamantaschen tried to kill me, I survived, let's eat!!! 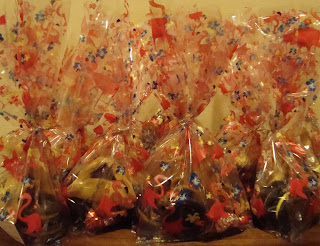 All yummy foods it makes my mouth-watering, happy mym!

Lots of fun and yummy food! Sounds like my kind of celebration :)
I've had hamantaschens before..filled with caramel and apples, I'm glad to know the background on them now! Thanks :)

Fascinating post. I can't wait to read about your trials in the kitchen. Calamities are always fun to read about, especially if they are someone else's.

Gorgeous photos to start the week!

My Mellow Yellow, come and see. have a nice day!

I've read the story of Esther and Mordecai and Haman many times, but never with the accompanying sound effects. Sounds like a fun time!

What an interesting tradition. And I love your last line. :-)

Thanks for the history lesson! I have a Jewish cousin! I love the line, they tried to kill us, we survived, now let's eat! It reminds me of my southern african american upbringing!

What a treasure for your friends to receive the mishloach manot from you particularly since you went to so much trouble to make them the hamantaschen! They turned out so beautifully and I know that they tasted even better. I love your history lessons, Mary, and the introduction to new foods! Thank you for sharing both!