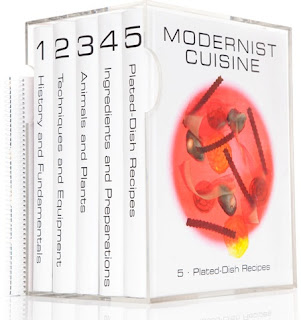 I read a review in The New York Times last week of Modernist Cuisine: The Art and Science of Cooking by Nathan Myhrvold, the former Chief Technology Officer at Microsoft. It's a massive -- literally! -- work dedicated to the most avant garde cooking techniques in the style that was originally labelled "Molecular Gastronomy."

Virtually no home cook can follow the recipes/steps/instructions, as the requisite equipment is expensive and the techniques are complicated and would fit quite comfortably in a scientific lab; but I find it all fascinating nonetheless. I'm hoping that the Ann Arbor Public Library will eventually purchase a set for me to peruse; I don't have an extra $450-600 (depending on where you shop) to buy it for myself!

Ferran Adria, the famed Spanish chef, is credited with initiating this wildly innovative cuisine. He creates such intriguing, fantastical dishes as:

an "egg" which is really a hollow, frozen shell made from Gorgonzola cheese

foams made with a primary ingredient combined with a gelling agent, then placed into a canister to be sprayed (as though it were whipped cream)

Chicago's Grant Achatz is the most noted chef/practitioner of Modernist Cuisine in the United States. Food & Wine magazine once wrote about him: Any ingredient that strays into his kitchen is examined, poked, prodded, stretched, reshaped, transubstantiated. Herbs are turned into gas, fruit is turned into paper, pizza is stripped of crunch and chew until it's nothing but pure flavor .... Achatz had figured out how to blow bubbles out of mozzarella and trap tomato foam inside them.

Of course, this is as much avant garde art as it is avant garde food. I imagine that eating these delicacies would be a nearly indescribable experience challenging each of the senses, as one's traditional expectations of the foods would be completely shattered and then pieced back together bit by bit. Curiosity would turn into puzzlement, followed by recognition and then astonishment.

So, now there is a consummate reference work to inform us all about Modernist Cuisine, since it's not the sort of cooking one can do a recipe search for in order to satisfy a craving for dinner on any given night. You can't just run to the cookware sections at Target or K-Mart or even William-Sonoma for the equipment you'd need, after all! But you can experience it all vicariously, at least.

The New York Times describes the set of books this way:

As scientific as it is gastronomic, it is virtually an encyclopedia of cooking, a visual roller coaster through the world of food and cooking tools, as well as a compendium of 1,500 recipes.

The book builds from an overview of food history, microbiology and nutrition in Volume 1; to traditional and modern techniques in Volume 2, the science of cooking meat and plants in Volume 3, and the use of thickeners, gels and foams in Volume 4 (which also has a detailed chapter each on wine and coffee). Volume 5 is devoted to recipes for finished dishes, wherein all these chemicals and tools come together to create elaborate modernist meals.

Andreas Viestad of The Washington Post writes: At the center of "Modernist Cuisine" is the revolution in cooking that has taken place in the past couple of decades .... Cooking has moved from the age of fire to the space age.

So it is abundantly clear that I will not be producing any of these scientific/culinary creations myself any time soon and featuring them on ye olde blog! But if you'd like to see some extraordinary examples of this amazing cuisine, look at this slideshow to illustrate its complexity and beauty. It is astounding, even if it is out of the reach of the average person -- like me -- who just wants to feed her loved ones ....
Posted by Yenta Mary at 12:02 AM

I would like to have some of that artwork for my kitchen. Amazing photos! I can only imagine what some of that food tastes like. Very interesting post, Mary! Thanks!

I'm always fascinated by the true science behind cooking. Not that I would ever do anything like in these books, but it amazes me that there are people who can do them. Aahhh.. to be in the kitchen for one day with one of those chefs! Thanks for sharing!

Alton Brown is about as scientific as I get, but I have to admit that this is fascinating. I'd love to taste a gorgonzola membrane.

Do you watch Top Chef on Bravo? They've been prone to a lot of Molecular Gastronomy stuff this season and it is fascinating! Of course I like all of those cooking shows better than I like cooking! I know! I'm a sad sad girl!