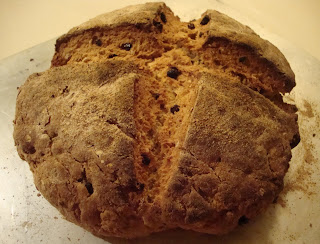 To get into the spirit of things today, St. Paddy's Day, let's start by listening to a cover song (originally done by The Dubliners) that Jeremy and his buddy Andrew -- otherwise known as The Celtic Clash -- have produced: "I Knew Danny Farrell."

Since I'm 1/4 Irish, you can imagine that St. Paddy's Day is a big deal for me even without the green beer (since I don't usually drink, other than an occasional glass of wine, and have always loathed beer even when it wasn't looking putrid).

I usually make corned beef 'n' cabbage, except that it's not vegetarian and so I can't cook it where I'm currently staying; but there's always just happy indulgence in a plateful of potatoes ... maybe a buffet of mashed, roasted with garlic, fried ... :) Don't worry -- I'll throw some protein (perhaps some salmon?) into the mix!

But the key ingredient to my celebration is my Brown Soda Bread, served with beloved Dubliner cheese ... sigh. Really, I don't need very much else to make me happy.

I've been baking this bread for so long that I don't even know where I found the original recipe, which has been tweaked so many ways that I now call it my own. I know it didn't come from my paternal grandmother, born Mary Brigid (Maie) Collins - is that a great name for a redheaded Irish girl, or what? - who never wrote down recipes and simply cooked and baked instinctively. But beyond that, I'm clueless.

I should make this more often because it's so easy; and yet, it seems to just be an annual celebratory food at my house. Some things are more special when only served occasionally, after all.

Irish flours tend to be more like our whole grain flours; so, for greater authenticity, you need to use whole wheat rather than only white varieties. It's not a sweet bread, despite the currants, and it's also very crumbly and scone-like.

I once saw a recipe for soda bread that contained yeast, which is kinda missing the point of it being a quick bread that relies upon baking soda for leavening. And I've also seen recipes containing caraway seeds; but as my father, the son of my Irish grandmother, always says with utter disgust: "Caraway seeds don't belong in soda bread." He has spoken!

So be sure to take some time while your corned beef is simmering to bake this simple, nutritious, beautifully rustic, and exceptional bread. And don't be shy about slathering it with butter -- St. Paddy's Day is a day for festivity, after all, but there's no need for imbibing or drunkenness ....

Preheat oven to 425 degrees Fahrenheit. Sprinkle a bit of flour onto 2 baking sheets, and set aside.

In a large mixing bowl, combine the white flour, white whole wheat flour, salt, oats and baking soda. Add the butter and mix it in with your fingertips until the mixture resembles meal. Stir in the raisins and the buttermilk to form a wet dough.

Knead the dough until it is cohesive. Divide the dough in half and shape each half into an 8-inch round; place one dough round onto each of the prepared baking sheets. Slice an “X” into the top of the dough. 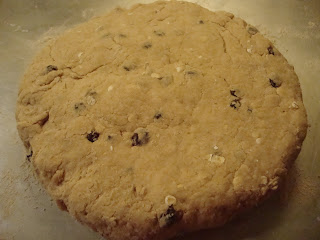 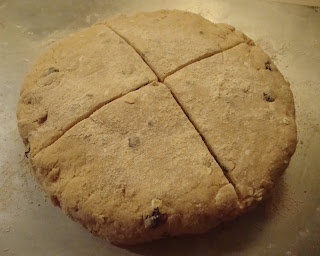 Bake the breads for 30-35 minutes until they are golden brown. Let cool completely before serving.

Happy St. Patrick's Day, Mary! Your bread looks so yummy. I wish you had made an extra loaf to send my way. I'm coming back to listen to Jeremy's band when David is not sleeping beside me. I hope you have a wonderful day! Candace

Happy St. Patick's Day to you, from a fellow part Irish (my last name was Kelly and I trace my great-great grandparents to Ireland )
Your soda bread looks delicious!!
I'm a new follower and still new blogger.I would love to have you check out my site at:
http://oaklawnimages.blogspot.com/

Ok...that's it. It's time to make soda bread. You are like the 3rd post I've seen for it this week and everyone has said how easy it was to make. I'm sold!! :) And did I hear you mention something about garlic, fried potatoes??? Can I come to dinner?

Can you believe that I've never tried Irish soda bread? Yes, its true :( I really want to now that I've seen how its made :) Sounds and looks delicious Mary! Happy St Pats day!

Great blog! I found you form Thirsty Thursday! I Hope you'll follow back! Memories in the Making

Hi. Your blog is really charming. Im your new follower. My name is Marelie and Im a new blogger.. www.cookiedropletsetcbymarelie.com

Happy Irish Day!! My mother used to make us Soda Bread! YUMMMM!!!! Thanks for sharing!

Im a new follower from http://www.obviously-marvelous.com/
Im over at http://blissfulblatterations.blogspot.com/

I so wanted a thick slice of this on a plate in front of me. Would butter be okay? Did the Irish eat peanut butter? Regardless, this crusty, dense bread would easily satisfy my daily bread fix. And easily replace the tankards of beer I won't consume on St Patrick's Day!

Definitely something I need to make! Thank you for the recipe. It looks great.

I listened to the song then looked up the lyrics to read them again. What a sad song. :-(

That soda bread looks delicious! I agree, whats the point of soda bread if you use yeast?

I'm a new follower from the Thirsty Thursday blog hop. I'm looking forward to reading more of your posts. You can follow me back at www.cobbled-stone.blogspot.com!

I'll have to try that!

I'm a new follower from the Friends and Giveaways blog hop. Nice to meet you. Hope you can stop by and say hi!

Wife on the Roller Coaster

I have had so many not so great loaves of soda bread that years ago when I was served some in Dublin, I asked our waiter what kind of bread it was, duh! It was so good, I really had no idea that I could actually like soda bread. Yours looks very much like what I had that day. I'll have to give your recipe a try.

I found you on the Almost Friday Blog Hop, I am your newest GFC follower. If you could check out my blog and follow me back I would appreciate it. Thanks Amber
http://dragonflysweetnest.blogspot.com/

I made soda bread for the first time, a few weeks ago and was surprised at how good it is. After seeing so many people making it, at this time of the year, I realize how popular it is. Yours looks like a hit.

I love your header and your whole blog.

Your son's cover of "I Knew Danny Farrell" is great! I enjoy all genres of Irish music (all music, really) and love to cook, so your post was a two-fer for me!

I am not a fan of the Soda Bread one usually gets in the states, and I generally make savory scones on St. Pat's Day, but this looks yummy. As someone else commented, it seems more in line with the bread we were served at many of the B&B's when we were in Ireland. A liberal schmear of Kerry Gold Butter and I'm good to go!

You have a great blog! I'm a new follower and I'd love to have you stop by and say hello some time.

I have never ever ate any irish soda bread before, I may have to try and make some.

I'm following you from fab friends thursday blog please come by my blog sometime when you get a moment would love to have you follow me back
http://www.shopping2scale.blogspot.com

I am SOOO making this! Delicious!!

What a classic, dense, and flavorful bread for St. Patrick's Day . . . . thanks for sharing on Fresh Clean and Pure Friday and Seasonal Saturday!