An Excellent Lunch After a Trip Through Hell

On a recent Saturday, I had to accompany someone to a circle of Hell that Dante never envisioned: IKEA. God, I hate that place!!!

I grew up in New York City and can work a crowd and deal with multitudes of people far better than most; and even *I* find IKEA to be overwhelming and oppressive. There is a desperation to buy something, anything, because everything is so cheap and the place is so trendy.

Swarms of locusts pour in the doors in a mad craze, lured by the smell of cinnamon rolls that wafts out to the parking lot. They lunge at the greeter, who must be able to recite his shpiel about where to find carts vs. bags and the floor vs. the warehouse in his sleep; his lips may keep mumbling the words until rigor mortis sets in.

And everywhere, it is as though people have oozed into every nook and cranny ... and each one of them has taken amphetamines, bustling and bouncing about gathering trinkets, trying out chairs, and eating Swedish meatballs in the cafeteria.

The only thing that makes the trip even remotely endurable is this: there is always the promise of food as a reward, because I won't go near the place unless I'm promised lunch.

And was my meal worth the horrors??? Oh, yes. Thankfully, yes!

I went to Plato's Coney Island in Canton, very close to the circle of Hell. Lunchtime on a Saturday is not an ideal time either to shop at IKEA (is there any day or time that the place isn't chaotic???), and it was not a great time to show up at Plato's, either -- we got the last table in the back, which actually was nice because it was secluded and more quiet.

There was an extensive menu, but the decision was made easier by a couple of factors:

1. I'm so sick of eggs as a cheap source of protein that I refused to have anything to do with the breakfast options.

2. I have so been craving meat that I merely looked at the carnivorous offerings, which made the decision much easier. 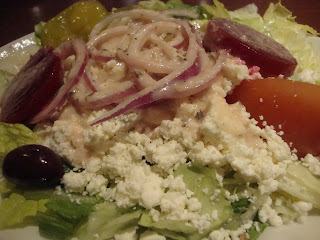 The "small" side salad was actually enough to serve as a meal for one -- I'm afraid to think how gargantuan a medium or large one would be. It featured a creamy dressing rather than a vinaigrette, and had just the right tang to complement the feta and beets.

And then our wonderful waitress brought out our sandwiches already cut in half and placed onto individual plates. We'd thought we'd just cut them in half ourselves and spill a fair amount onto the table as we traded food and carried it over to the other plate; but clearly, the folks at Plato's were thinking faster than we were that day! 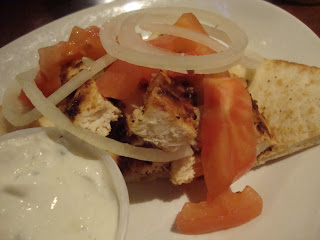 The chicken gyro was tender, on a slightly sweet pita bread with a very thick -- instead of the usual liquid -- yogurt sauce. Generous toppings of tomatoes and onions were exceptional in conjunction with the tender, slightly spiced grilled chicken. Honestly, I could have eaten an entire one of these in addition to everything else! 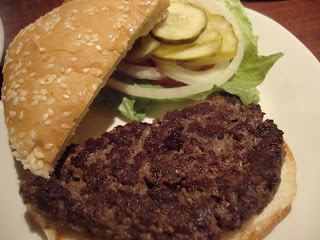 The burger was a perfect medium-well (more cooked than I prefer, but I'm easy-going and accommodated my lunch companion), with generous helpings of onions, tomato, lettuce and pickles. Half of one was more than enough for a meal, and this was on top of the already-eaten salad ... I always maintain I can eat more than people think I can! And oh -- bestill my heart (literally, if you eat too many of 'em!) -- the fries were extraordinary, absolutely extraordinary! Golden, crisp, hand-cut ... crunchy, and with a variety of longer specimens mixed in with perfectly toasty little tidbits, as well. By the time we'd eaten all the salad and the sandwiches, unfortunately the fries did not receive their due attention.

Now, a feast such as this should have cost a near fortune, right? Burger with loads of toppings, huge salad, chicken sandwich, platter-ful of fries ... easily a $20-30 meal, right??? Guess again: $13.83. I'm serious, see for yourselves! 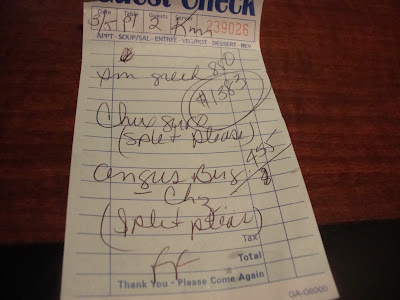 I hope never, ever to have to endure the circle of Hell again! But I would love to go back to Plato's at any time ... :)

Hi Mary,
Reading this made me hungry... The last time I stopped by, there was the post on moving? kitchen makeover? Oy vey, a lot has happened since we last said hello and you have a whole new blog.
Glad I stopped by. I will subscribe again...
Please add an email subscription feature to your blog... easier for me to read as I have tons and tons via rss.
Have a great 2011
Elizabeth

Nice! But wait, you didn't stay for the Swedish meatballs at Ikea?!? haha

The nearest IKEA is about 2 1/2 hours from us, so I think I'm safe. But I can feel the heat from here! Thanks for the warning!

Your lunch sounds fantastic. It's hard to find anything reasonably priced anymore. This post is giving me an idea of what to make for our Greek theme dinner coming up on Saturday night!

This cracked me up! The closest IKEA to me is 3 1/2 hours away so I've never been but always wanted to. This has slightly changed my mind:)
Came over from the blog hop to say hi. It's nice to meet you!

I'm so looking forward to Denver's own much anticipated "Circle of Hell" opening in the fall, but alas no Plato's to temper the experience. This food look fantastic and the price is unbelieveable. That salad and those fries are enough to make me want to get on a plane.

They're FINALLY building an IKEA in Denver, and I'm super excited about it. Or I was until I read your post :( BOO Don't tell me horror stories about IKEA! I want all that cheap uber trendy stuff LOL! :) The meal looks really good, total reward for IKEA! I loved the salad, too, it looked delicious!

Your post cracked me up, my dear dear friend, because I have often fallen victim to the Ikea curse - purchasing 100 tea-light candles for $5.00 and finding that the candles won't burn longer than 5 minutes because they are so crappy. Augh!!!

But your food reward following the trip from Hell looks AMAZING!! Seriously - that chicken gyros has MY NAME ALL OVER IT!!! LOVE IT!

That's my kinda meal! Thanks for sharing your experience - and your photos of the outing are amazing, too!

Hi- I am a new follower from the Good Friends Just Click Blog Hop- I would appreciate it if you also followed me :)
http://milliemorganmedia.blogspot.com

Newest follower from the Family Blog hop! Would love for you to stop by and follow back! Have a great day! (:

The chicken gyro looks way better than the one that I had recently. Mine was not so wonderful. I'm quite sure that tomorrow calls for french fries. I've been craving them and seeing your photos just reinforced that. :) I went to Ikea once...in Houston...and it was so overwhelming. I feel ya on that one! Have a great evening! Candace

Sorry you had to go through all that before your fabulous lunch!! Miriam@Meatless Meals For Meat Eaters

Thought it was just me who hated the crowds at IKEA. The food looks delish, but not sure that's going to lure me in. Loved your post on the "P" food that's served on shrove tuesday. Now THAT I'd stand in line for. stopping by for Tiggerific tuesday. blessings, k