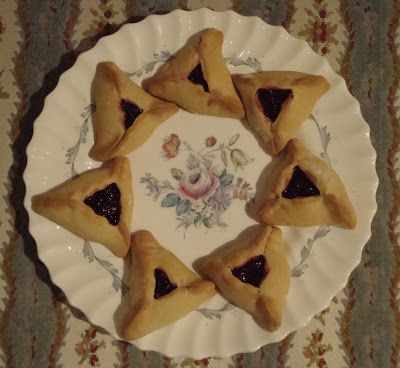 Now, some folks may actually know what hamantaschen [hah-men-TAHSH-en] are, because they've evolved into a German Christmas cookie. But they originated -- and continue to exist happily -- as the requisite Purim treat. They are named for either the ears or the hat, according to competing legends, of that consummate bad guy, Haman.

The name hamantash (המן־טאַש), is commonly known as a reference to Haman, the villain of Purim, as described in the Book of Esther. The pastries are supposed to symbolize the defeated enemy of the Jewish people, and thus resemble the "ears of Haman". A more likely source of the name is a folk etymology: the original Yiddish word מאָן־טאַשן (montashn) or German word mohntaschen, both meaning poppyseed-filled pouches ... was transformed to Hamantaschen, likely by association with Haman. In Israel, they are called Oznei Haman (Hebrew: אוזני המן‎), Hebrew for "Haman's ears" in reference to their defeated enemy's ears.
I love Purim, as it's an excuse for everyone -- especially adults, I think! -- to be silly and to eat cookies ... what's not to love??? And part of the tradition is the inevitable debate over whether anyone likes the prune filled hamantaschen, attempts to claim that only those with poppy seeds are authentic, whether yeast dough or sugar dough is easier to work with or tastes better ... oy. It's a cookie! Just give me the cookie! Apricot, cherry, chocolate, prune, poppy seed, yeast, whatever ... I just want the cookies!

I make my own from scratch each year, including the fillings; I freeze fruits from the Summer precisely to make jam for filling hamantaschen in the Spring.

But I couldn't bring those items, prepared in my old kitchen, into the kosher home I'm currently staying at. So I either had to buy new ingredients and make new fillings here, or I had to find an alternate site for my baking fest.

Tom very graciously invited me to use his kitchen ... :)

I went over there with all of my ingredients -- including my homemade/handmade fillings -- prepared to bake my little heart out. Except that, with all of my things packed into boxes and in storage, I couldn't find my faithful, trustworthy recipe.

So I did a search and selected one of the 843,025 options that were offered, and set to mixing dough, refrigerating dough, rolling dough, cutting dough, forming dough, and baking dough ... only to have my cookies turn out like this: 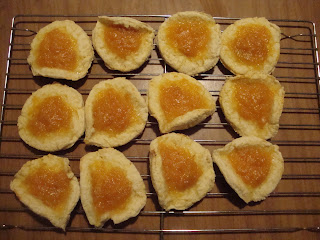 We scraped the fillings off the cookies and put them back into their original containers -- why waste anything??? -- with hopes of trying again another day. But there just wasn't any way to coordinate that at Tom's place, so we moved our operation to the kitchen where I'm staying and I resigned myself to making new fillings -- mixed berry and chocolate.

In the meantime, I'd found my own recipe for the dough; but I had to make some strategic substitutions for both non-dairy and kosher ingredients. I learned that Tofutti makes a "sour cream" that actually looks like the real thing ... who knew??? I didn't actually taste it, 'cause I'm not that brave. But I baked with it nonetheless!

Again I set about to mixing dough, refrigerating dough, rolling dough, cutting dough, forming dough, and baking dough. And I was so devastated at the results -- cookies which collapsed, fillings which oozed everwhere -- that I couldn't even take their picture through my tears.

I thought I'd lost my baking mojo, was railing about the "fake" ingredients I'd had to use, resented not having my own kitchen and equipment, felt that in the midst of the chaos of my travels through various living arrangements and kitchens that now I'd also have to sacrifice a beloved tradition ... these cookies triggered a powerful response, and it wasn't very pretty.

And when the timer rang for the first batch on this third attempt, I was leery. I was prepared for disaster, and yet I found that they were perfect! They were triangles! The filling was contained instead of creeping all over the baking sheet! They actually looked like hamantaschen!!! 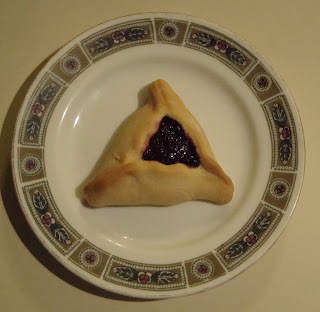 So, I don't know what happened between attempts #2 and #3, other than the universe took pity on me and righted whatever had been wrong. I was, and am, grateful for it!

Hamantaschen may look difficult to make, but they're very easy. They also don't need to be picture perfect, as I rather like the hint of a rustic look which shows that they were made by hand, with love; but they do need to at least be readily identifiable as hamantaschen!

In a large mixing bowl, combine the butter and brown sugar; stir in the baking powder, baking soda and salt. Mix in the sour cream and the eggs. Stir in the flour.

Divide the dough into 2 portions, wrap in each plastic, and refrigerate overnight.

Preheat the oven to 350F. Lightly grease a cookie sheet.

Take one portion of the dough and roll it out to 1/4" thickness. Using a 3" round cookie cutter, cut out as many circles as you can; place dough circles onto the baking sheet, 2" apart.

Place a teaspoon of filling into the center of each dough circle. 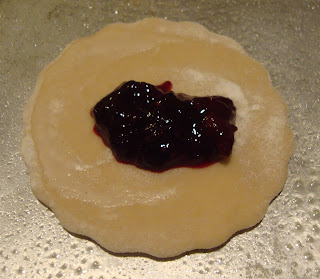 Wet your fingertip and run it around the circumference of the dough, one at a time, to help the dough to adhere when you pinch it together.

Pull up two sides of the circle, and pinch the corner where they meet. 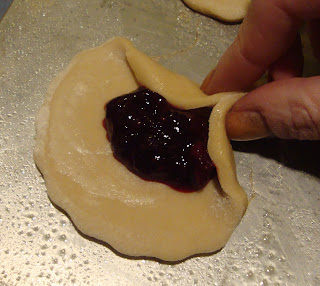 Pull up the remaining side, and pinch at the corners. 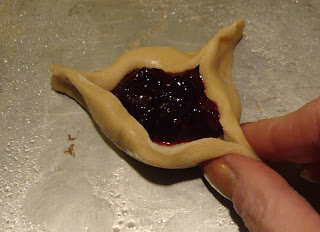 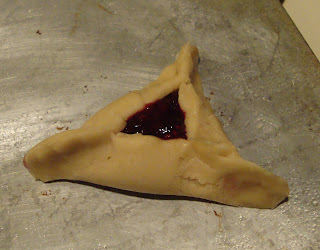 Repeat this procedure with each of the cookies, then bake for 10 minutes until the cookies are just turning golden. Remove to a rack and let them cool completely, repeating the process with the remaining dough and fillings. 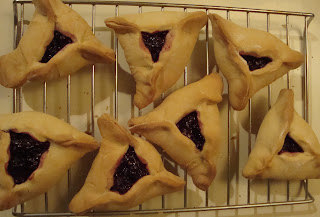 This recipe makes dozens of cookies, but I can't really tell you how many ... maybe 4 dozen??? I just bake until I run out of either dough or filling, so it's a very inexact science! 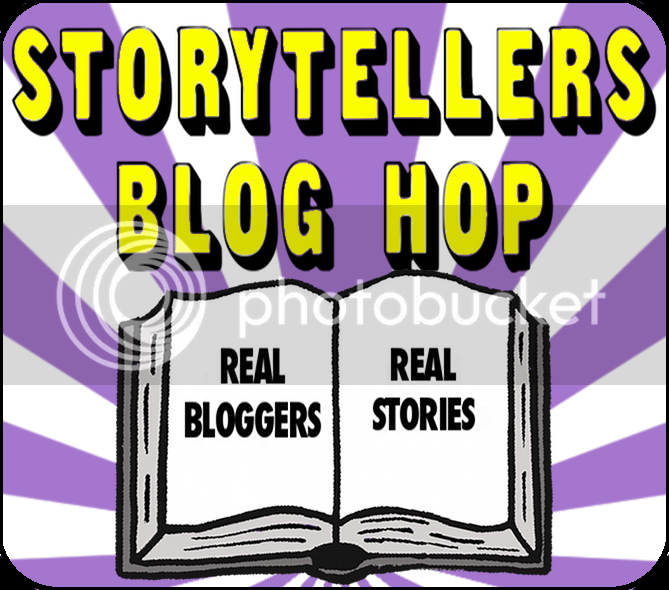 Sheesh! What a story. I don't know what it is but when I'm not in my own kitchen I just can't cook. It's like I've got all thumbs. In the end, they turned out beautifully and that's all that really matters. I hope you were able to have a nice big Margarita afterward. That always makes things better for me.

Bless your heart! You had a time with making those cookies; but you perservered! I'm happy that it ended well for you. They look so beautiful and I know they were yummy. Thank you for sharing your recipe! Stay warm and have a fabulous day!

I still use the recipe my kids got in nursery school. Yours look so good, I wish I made some, I went to the bakery!

3rd time's a charm, right? Well, despite all your troubles, they look fantastic! I wish you weren't so far away, I'd let you bake/cook anything in my kitchen :)

They look wonderful! And all these years I thought those were supposed to be three-cornered hats. I suppose Haman wasn't at the crossing of the Delaware, was he. ;-)

Wow I love to try this one. Looks very yummy!
Cardinal

Oh Mary, your dedication to these cookies is amazing!! I would have given up after round 2 I'm pretty sure. No wait...no I wouldn't have, its a cookie and I love cookies!! The 3rd time was indeed the charm and they look great! Hope you enjoyed Purim, and your Hamantaschen :)

Thanks for posting! Now I can make my own! I haven't been to a Purim carnival since I was little, but reading all these blogs about Purim takes me back!

I'm your new follower from the blog hop. It would be great if you could come check min out when you have a chance!

I can only imagine the joy, and relief(!), you must've felt pulling out that final batch of cookies. I'm glad you had success in the end but sure wish you didn't have to have such a long journey getting there!

looks really good! Mine is up - Ruby Tuesday

OH my husband loves these. I'll have to try your recipe! Thanks! New gfc follower from hop. If you get a chance please stop by my blog and return the favor

Hey following you from the blog hop. Hope you'll follow me back. http://hisperfectpromises.blogspot.com/

What delicious treats! I love these! Miriam@Meatless Meals For Meat Eaters

I wouldn't care what filling was in them, they look yummy! blessings, k

Would you come and see my Ruby Tuesday ? Have a lovely evening!

They really did come out beautiful. They look like the ones my mother used to bake.. Yum..

I'm afraid if I ate just one, I wouldn't be able to stop!

A TOUCH OF RED

They say that just one touch of red
Will put big, bold thoughts in your head.
So scarlet’s for you,
And burgundy too,
And cardinal and carmine—‘nuff said!

These look so yummy and beautiful! I am really glad you linked up this post to the Storytellers Blog Hop. Hope you had a great weekend Mary!!