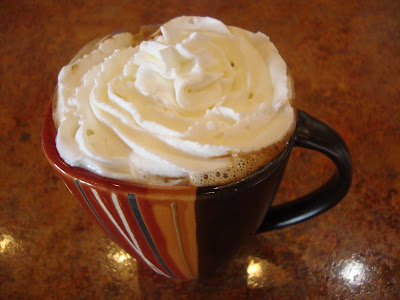 Moonwinks Cafe is a charming coffee shop that I have been visiting on a semi-regular basis for several years now. Because of appointments in the area recently, I've become rather a regular in the past few weeks; and so it only seemed fitting to tell about this wonderful place.

I had thought that it was a bit of a secret, out on the north end of town, but apparently I was quite mistaken: I was thrilled when Moonwinks placed 3rd in AnnArbor.com's recent poll to find the best coffeehouse in Ann Arbor. Another contender disparaged this lovely place as merely "a sandwich shop," which is unfair because Moonwinks is so much more than that! You can go to Subway or Quizno's or Jimmy John's, after all, if you only want a sandwich. I go to Moonwinks for coffee and treats, a warm welcome, and a place to linger with loved ones.

It's not a franchise, and it's not a bustling take-out kind of place. It's not the sort of coffee shop where you rush in to grab something to go ... you could do that, certainly, but then you'd be missing the point.

Instead, Moonwinks is the sort of place to sit and read your paper or play a board game (many of which are provided on shelves). It's the sort of place that's actually conducive to the old-fashioned art of conversation. One afternoon, I even witnessed a knitting group happily enjoying time with warm drinks, a cherished hobby, and good friends ... they were so happy! You could bring a laptop with you and do the "coffice" (coffee + office) thing there, but it would almost seem out of place.

I haven't eaten much at Moonwinks, admittedly, although a lovely assortment of breakfast treats, quiches, salads and, yes, sandwiches is offered. It seems I'm usually there fairly soon after having eaten breakfast or in the late afternoon before I go home to prepare dinner. So I can attest to the lightness and sweetness of the very generously sized blueberry muffin I once had, but can only tell you -- rather than describing in luscious detail --that everything else looks incredibly tempting. I definitely need to work on my timing in order to eat more of the offerings there!

Instead, I usually order coffee (proudly roasted by Ann Arbor's own Zingerman's), and must absolutely rave about the Sweet Almond Mocha confection pictured above! I had gone up to the counter with notions of chai running through my head; but when I saw the featured drinks, I immediately swooned over this sweet, chocolatey, whipped-cream laden feast -- it was truly like drinking a dessert!

The story behind the cafe's name is very sweet, involving the owner's parents and how they met at the Moonwinks Restaurant and Bar in New York state many years ago, in 1941. As the website says, "The name, Moonwinks, has always signified a very special location for the beginning of a lasting and loving relationship."

It represents not only the lasting and loving relationship of the owner's parents, but also the relationship you'll develop with the cafe yourself ... :)


Disclosure: I happen to know the owner of Moonwinks, and think it's only fair to let everyone in on that little tidbit. However, I fell in love with this utterly charming cafe long before finding out that I knew her. So my opinion is truly sincere, and I only have more affection for Moonwinks after finding out that such a lovely woman happens to be responsible for the warmth and hospitality ... :)
Posted by Yenta Mary at 12:22 AM

Places like this are too few and far between. They are great, and make for an entire experience, not just a run in, order, scarf and leave. Sounds really charming!

I love places like there. They can be hard to find nowadays...everyone seems to always be in such a hurry!! Great! Just one more thing to make me wish I lived closer to you! :)

How sweet. In England there are so many quaint little coffee shops like this you never have to look far for a cozy corner to enjoy with friends. I miss that so much. Maybe that should be my business in my next life!

There's something so special about places that are not franchise stores, but are independently-owned and operated. This sounds like a wonderful place! That's a great photo. :-)

I am not a coffee drinker, but I read about places like this and wish I was...

We had a favorite little spot like this in Louisiana that we frequently visited. They made THE best chai tea and hot beignets! I have not been able to find either in my new town. I'm sad to say that they only run on Dunkin here so see...it's not perfect by any means! After we sold our home in Louisiana and moved to our temporary location, we did not have Internet or cable. We would head to our favorite spot after dinner with our laptops and/or meet friends. The small places like these are rare treasures! I'm happy you have one available to you. Enjoy!

You know that I'm loving any coffee shop post - and this one does not disappoint! LOVE it!