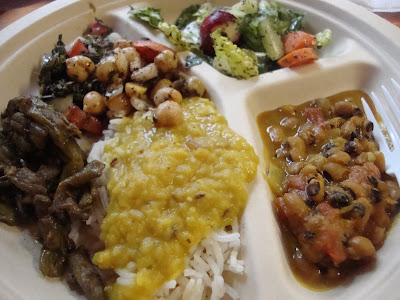 It's Frugal Floozie Friday, and today we're indulging in one of my very favorite cuisines: Indian. I adore Indian food, cook it often, and even have a friend - Sid, who first contacted me as an AnnArbor.com reader - who regularly tempts me by sending videos featuring Indian recipes.

So in looking for a restaurant to feature today, it was easy to decide upon one: Earthen Jar.

Earthen Jar's mostly vegan Indian buffet costs a mere $5.99 per pound. The problem, however, lies in trying to exhibit restraint - everything looks and smells amazing, and you'll find yourself wanting to try each offering. Except that then, of course, you'll end up paying $23 for your dinner! So a little of this, a little of that ... and the secret weapon: bring a friend, so you can each select different items and then share the wealth. 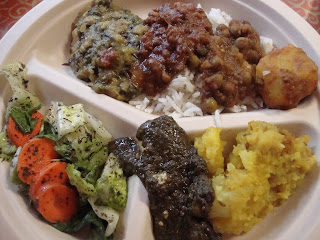 Tom and I recently ate dinner at this small but colorful restaurant, and I was completely seduced by all the fragrant and fabulous foods. There was an astounding variety of different lentil dishes, chickpeas, black-eyed peas, spinach, potatoes, paneer, salads; some of these were spicy, others were milder, but each had a unique and wonderful flavor.

Earthen Jar's menu is primarily vegan, including macaroni and cheese (I guess to keep the kids or picky eaters happy?); but there are a very few dairy products, such as a yogurt-based raita and the paneer which is in a couple of the dishes. There are also desserts (puddings and halwa), which we didn't get to after our immensely delicious dinner indulgence.

A few extra items are available at a charge beyond that of the buffet, such as baked goods, beverages and traditional Indian breads. Tom and I ordered naan for 99-cents each; but interestingly, without the bread, we had portioned out the food on our plates for a perfect and identical total of $5 each - the Frugal Floozie Friday budget per person.

Unfortunately, Earthen Jar is right next to Jerusalem Garden, the Middle Eastern restaurant that was featured in a recent Frugal Floozie Friday post; therefore, it is suffering the same misery of being located right in the midst of the enormous and seemingly endless project to construct an underground parking structure downtown. There is a sign saying that the two restaurants on that block are still open; but with parking non-existent and the street blocked off, it's not a particularly enticing location.

So go feast upon Indian food at a restaurant which blissfully lets you try a bit of each item rather than having to only pick one dish - the joy of a buffet! And help to keep Earthen Jar open through the construction quagmire, as it is truly a fabulous asset to Ann Arbor.

I applaud you on your restraint.. I think I would be one of those people that walked out of there paying $23!!! lol

Oh wow, Ive never had indian food before. I live in a very small town and we dont have much for ethnic resteraunts :[

I have been completely seduced by Indian food lately. What a wonderful place to have nearby for you! I would love that. Have a beautiful weekend, friend!

I love the idea of paying by the pound--I might show more restraint at our local Indian buffet if that were the case!

The food at Earthen Jar looks so beautiful and appealing. Wish it were a little closer. I'm glad you can enjoy it, for it looks like a fantastic buffet!

I haven't been to Earthen Jar since I was prego with my youngest 3 years ago!!! My husband was amazed at my total for my plate...I had to try EVERYTHING and had been craving Indian food for a couple weeks! The food never lets you down and now you have me wanting to go back there very soon :)