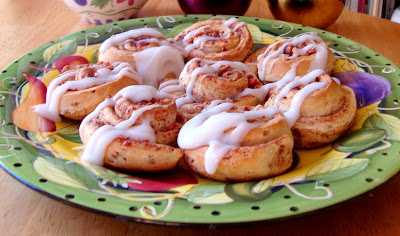 First things first: I was giving away a $75 Whole Foods gift card last week, and had lots of friends hoping they'd be chosen. But there could only be one ... oh, if only I were Santa and could generate bunches of 'em! But instead, I went to Random.org to generate a winner, and here are the results (with apologies for it not formatting properly, techno-dolt that I sometimes am, such that I simply had to type in the information):

MAZAL TOV to Nikki K.!!! Put the card to good use and be sure to tell me about the fabulous dishes you cook with the goodies you buy!

My friend Beth frequently sends me recipe ideas, and they always seem to include bacon. Considering that we work together at a synagogue, this is fairly amusing to us! You hire shiksas, and look what happens ... oy!

So, Beth recently sent me an idea she'd found online in which a commercially-prepared refrigerated cinnamon roll dough is unrolled, a strip of bacon is laid over it, and the entire thing is wrapped up again into a spiral and baked into salty-sweet, pork-filled goodness. We drooled over our keyboards.

But as I thought about it, I thought the strip of bacon might not cook fully since it was buried in the dough; and as it cooked, to whatever degree of done-ness, it would ooze bacon fat and possibly make the cinnamon rolls soggy. So, I took the inspiration and I tweaked it a bit. I pre-cooked the bacon 'til crispy, rolled the crumbles into the dough, then baked away. The fragrance in the kitchen was astounding!

And so, for a Christmas breakfast, a weekend brunch, or "just 'cause," I give you Bacon-Filled Cinnamon Rolls - ridiculously easy to make and worth far more than their weight in gold. How can you not love a 2-ingredient recipe at this busy time, especially when it includes BACON???

Open the can of dough and reserve the icing. Unroll the dough and lay it onto a countertop or cutting board. 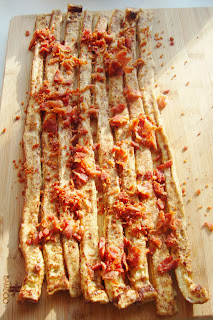 Cook the bacon until crisp, then chop it into crumbles. Sprinkle the crumbles over the cinnamon roll dough, then roll each strip into a spiral and place it into the baking pan.

Bake for 15 minutes, until the cinnamon rolls are golden. Remove from the pan and let cool a bit, then drizzle with the reserved icing.

haha! I love that you come up with food with bacon in it when you are working!! lol And OMG, what a fantastic idea this is! I need to make this Saturday... it's the perfect thing for a pregnant lady like me who is will now be craving bacon all week...lol

I would definitely have done the same thing. Even if the whole strip of bacon cooked thoroughly, it would make eating the roll awkward.

Whenever I read the word "bacon" I think of the Begging Strips commercial. "Bacon bacon bacon. I'd get it myself but I don't have thumbs." I know... not relevant at all, but that is just how my brain works.

Congrats Nikki and boy oh boy am I ever jealous!

Whole Foods think they are so sly, they are putting their first Knoxville location right where I pass on my way home from work every single day. I see what they are up to ;)

I have to make these for Trevor. He loves it when I cook bacon into his waffles.