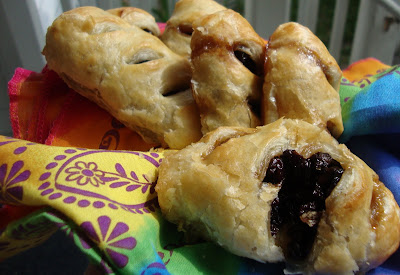 Regular readers know that I'll celebrate virtually any holiday -- religious, secular, literary, whimsical. Since it's all about the food, it doesn't much matter to me whether I'm fully invested in the reason for the festivities, as long as there's something good to eat!

But today is a holiday which is completely and utterly a part of my very being: today is Bloomsday, in honor of the profoundly fascinating Irish author James Joyce.

Joyce's masterpiece -- the challenging, beautiful, lyrical and little read (even when it's assigned in college courses!) novel Ulysses -- takes place on June 16, 1904. It is modeled after The Odyssey, and tells of the adventures of Leopold Bloom as he travels through his day in Dublin.

This is very sweet and romantic, in that this particular date was chosen because June 16, 1904 is the date on which Joyce first went out with his future wife, Nora (née Norah). How often does one's first date get commemorated in a revered work of literature???

I love Joyce, though it has admittedly been many, many moons since I've indulged my affection and actually read his work ... I should remedy this, perhaps re-reading Dubliners, the book which began my Joycean devotion, on my sunny front porch this summer.

I have celebrated Bloomsday with lamb stew, with soda bread, with any number of traditional Irish foods; but I haven't yet resorted to preparing or eating some of the foods that Leopold himself relishes:

"Mr Leopold Bloom ate with relish the inner organs of beasts and fowls. He liked thick giblet soup, nutty gizzards, a stuffed roast heart, liverslices fried with crustcrumbs, fried hencods' roes. Most of all he liked grilled mutton kidneys which gave to his palate a fine tang of faintly scented urine."

This year, I thought I would take some inspiration from the book ... but not with any organ meats! Instead, I made a sweet pastry described in Chapter 8 - "Lestrygonians":

"He halted again and bought from the old applewoman two Banbury cakes for a penny and broke the brittle paste and threw its fragments down into the Liffey. See that? The gulls swooped silently, two, then all from their heights, pouncing on prey. Gone. Every morsel. Aware of their greed and cunning he shook the powdery crumb from his hands. They never expected that. Manna."

And so today I offer Banbury Cakes: ovals of puff pastry filled with spiced dried fruits, and distinctively bearing three slits in the top. They originated in the Oxfordshire region of England and have been made since at least the year 1586.

I have actually made my own puff pastry before -- just once -- but can't really justify the time and effort, given how little counter space I have in my kitchen and how readily I can just open the freezer door at the grocery store to purchase a box of dough that Pepperidge Farm has graciously already prepared for me. So this recipe is very easy to make, and the fragrances emanating from the oven are absolutely divine!

The filling should theoretically offer currants, raisins and those little candied fruits that everyone else loathes in cakes and cookies at Christmastime. I don't actually mind them, but since it's not fruitcake season it didn't seem worth hunting them down; I used only currants, because that's what I had on hand ... that and some candied ginger, simply because I adore it.

Instead of "brittle paste" and "powdery crumbs," I found myself with warm, fragrant, freshly baked pastries that were sticky, sweet, perfectly spiced and addictive.

It would have taken virtually no effort to devour the batch, but I employed restraint and ate only one half of one treat ... though I can only claim that much virtue because I managed to clumsily drop the other half!

And I was valiant in my effort to save some because I didn't want to have a late-night craving and find myself wanting. These Banbury Cakes were so wonderful that they deserve to be savored with a cup of coffee or a glass of iced Irish breakfast tea.

Whether exhibiting more strength than the gulls did in resisting the temptation to eat every morsel in one fell swoop or taking the time to savor Joyce's intricate work, patience can be a virtue ....

Place the currants, tea, vanilla, cinnamon, ginger and brown sugar into a small saucepan; bring to a boil. Cook, stirring frequently, for about 5 minutes until most of the liquid has been absorbed. Chill.

Preheat the oven to 425F. Lightly grease a baking sheet.

Lay the puff pastry onto a lightly floured surface and cut into 6 rectangles. Roll each out just a bit, 'til 1" wider in each direction. 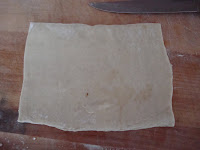 Divide the currant mixture among the rectangles, placing each dollop into the center of the dough. 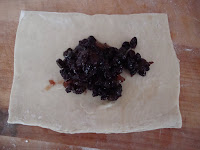 One by one, bring the long sides of the rectangle up to meet each other; pinch to seal. 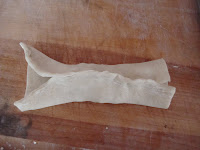 Trim the corners off each end of the dough. 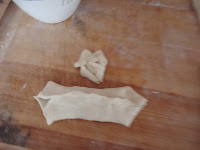 Fold the dough up and pinch it to seal, forming an oval-shaped pastry. 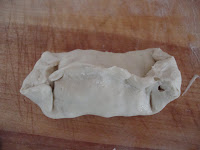 Beat the egg. Flip the pastry over, and brush with the egg wash. 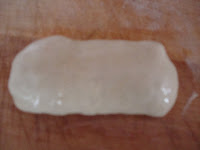 Take a pair of scissors and snip 3 diagonal slits into the top of the pastry. 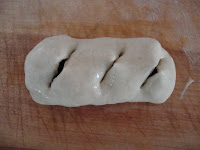 Place the pastry onto the prepared baking sheet, and repeat with remaining dough and filling. 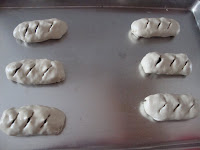 Bake for 20 minutes, until the pastries are golden and the filling is just bubbling. Let cool.

From a fellow insomniac, good morning! And what, no organ meats? This has to be my favorite holiday post. Cool holiday, and beautiful little pastries.

How in the world did you manage to only eat half of one?! These look scrumptious!

Is it bad that I didn't even know there was a Bloomsday day? :) Thanks for the little lesson!
The cakes look wonderful. I'm with Candace.. how did you only eat half of one????