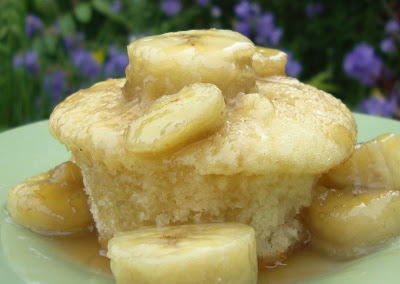 I recently won a lovely "swag bag" from my very good blogging buddy Angela, of the always inspirational Foodie Road Show. She had attended the BlogHer Food '11 conference in Atlanta, and decided to share the wealth with those of us who'd been unable to go.

And just what goodies did I receive? 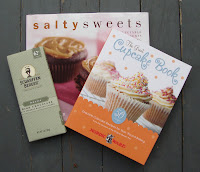 - Salty Sweets: Delectable Desserts and Tempting Treats with a Sublime Kiss of Salt, by Christie Matheson

So, of course, I had to put my new cookbooks to use. For a food/cooking/baking enthusiast like lil' ol' moi, this was like having a new toy!

It took a considerable amount of effort to determine where, precisely, to start with this project. The peanut butter frosting was calling loudly; no cake or brownie or other vehicle necessary, merely the frosting.

Perhaps some butterscotch pudding? I had already devoured a sufficient quantity of whipped cream on National Strawberry Shortcake Day, and feel quite certain that my arteries are still groaning under the strain of it; so I didn't think that another indulgence in cream was particularly warranted.

And then I settled upon one recipe from each book, which would then be combined into one luscious dessert.

I baked the cupcake portion of the Bostom Cream Cupcakes from the Nordic Ware book, and topped them with the Caramelized Bananas which would normally be part of the filling in the Oatmeal-Crusted Banana Tart featured in the book about sweet treats.

This doesn't, admittedly, make for the most colorful dessert. And yet, it is utterly delectable without being too sugary. I had thought that a dab of whipped cream might be warranted, but found that this was actually unnecessary when I tried it. (Oh, the things I do for my readers, eating my way through variations on recipes until finding just the right one to share with you!)

The cakes are tender and moist even before being drenched in the caramel syrup, and their flavor shines through independently. The bananas almost taste as though they've been touched with a hint of rum (which would not be an ill-advised contribution to the cause!), and the brown sugar develops a rich, burnished depth of flavor from being melted and boiled.

These are a lovely, light dessert for a summer evening.

In a large bowl, combine the flour, baking powder, sugar and salt. Combine the milk, butter, egg and vanilla; pour into the flour mixture and stir just until combined.

Divide the batter among the lined muffin tins, and bake for 20 minutes until a tester comes out clean. Let cool completely.

Melt the butter in a large skillet over medium heat, then add the bananas to the skillet in a single layer. Sprinkle the bananas with the brown sugar and salt.

Raise the heat to medium-high and cook the bananas for 3-4 minutes, turning them once about halfway through, until the sugar is caramelized.

omygosh, Mary! Remind me again why we don't live close to one another? It might not be colorful; but, it certainly looks fantastic. Yum!

Goodness, Mary, that looks AMAZING! Could this be considered breakfast? What about lunch or dinner?? :) Utterly delectable is a great way to describe these and I haven't even taken a bite of them yet!! I just know!

This is the one way that I will actually eat bananas... I know it's much healthier to eat them just as they are, but for some reason, without butter and brown sugar they just aren't "apeeling" to me! LOL (sorry about that!)

They're kind of like little Bananas Foster cakes, no? I'd say that you're definitely on to something regarding the addition of a wee nip of rum. Yum!

These are a must try for me... Consider them bookmarked!

Yum! I wish I could afford to hire you as my personal chef! Of course the commute would be formidable but just think of the fun we would have!

It seems that 'homemade' cupcakes are always so much better, so much less sweet than a mix, and have a nicer texture. Bananas have always been a favorite of mine, (especially banana popsicles when I was a kid!), fried banana chips, banana bread, etc. This combination sounds lovely.