Baked Chicken with Morels and Leeks 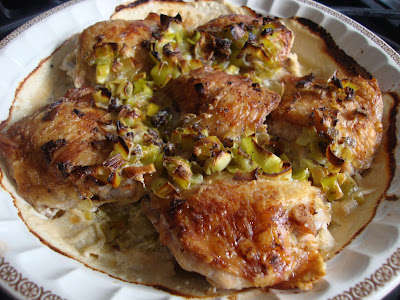 Morel mushrooms are prized for their deep, rich taste; their appearance in specialty markets is practically an announcement in Michigan that "Spring is here!"

So when I found some available recently, I bought a few.  Just a few - they cost $50 per pound!  But for a couple of judiciously-spent dollars, it's possible to splurge a bit on an extraordinary flavor accent.

I found some beautiful chicken thighs on sale, and I had some leeks and a splash of half-and-half loitering in my refrigerator; these inexpensive and ready ingredients combined with the few morels to make a simple but delicious dish.

The chicken, having baked in cream, is fork-tender.  The sauce is luscious, and lets the leeks and the morels shine without either one overpowering any other ingredient.

This would be fabulous for brunch or for a simple weekend meal; it's ideal to serve for a romantic evening.  Enjoy this truly delicious meal, and feel as though you're indulging in luxury.


Baked Chicken with Morels and Leeks

Melt remaining tablespoon of butter in a large skillet.  Season chicken with remaining salt, then cook for 5 minutes per side until golden brown.  Place chicken into a baking dish and top with cream sauce.  Bake for 35 minutes until chicken is tender and sauce is bubbling.

Serve with rice, pasta or potatoes to soak up the creamy sauce.  Serves 4-6.

(With many thanks to my friend and ex-sister-in-law Marjie for the beautiful blue ceramic trivet under the dish of chicken, which references the Dione Lucas Gourmet Cooking School Cookbook.  Dione Lucas was a predecessor to, and influence upon, Julia Child; she was the first female graduate of Le Cordon Bleu and the first woman to be featured in a cooking show on television.)
Posted by Yenta Mary at 6:00 AM

I'm sooooo jealous that you got your hand on some morels!! I very rarely see them out here. What a great use of them too.. LOVE this dish. I don't care that it's 5:20 in the morning, I want a big plate of that... no, scratch that - I want the whole pan!!!

Wonderful! I used to find morels along the RR tracks near Grandpa's house. Unfortunately, we don't have a single elm in the woods where we live, so I don't see morels anymore. But this does encourage me to go beyond our borders and look around!
Beautiful dish, Mary.

I love the new (to me) look of your blog. I'm so sorry that it has been so long since I have stopped by. This recipe looks amazing. I don't often see morels but this recipe is worth seeking some out.

Yummy, I am going to give this a try!

I have never had morels before! This looks sooo good, Mary. Yum!