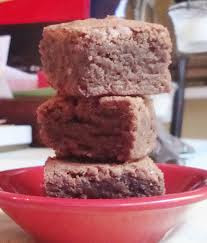 For Julia Child's 100th birthday on August 15, I celebrated by bringing a batch of brownies to work, having made them with one of Julia's recipes.

The method is a bit more involved than simply "dump 'n' stir," but none of the prep is difficult. And I am here to tell you that every single step is absolutely worth it. I've made some exceptional brownies before - my Hot Damn! Triple Orange Brownies, in particular. But I've gotta say that these may very well be my new all-time favorites.

One of my co-workers declared these "the best brownies ever"; another proclaimed them "divine." I can't argue with either assessment - these are unbelievably rich, decadent, seductive, so wrong and yet so, so right. Of course, with 2 cups of sugar, nearly half-a-pound of chocolate, and a full cup of butter, what do you expect??? They'll kill you, but you'll die blissfully and ecstatically happy!

After mixing everything together and pouring the batter into the pan, I set the timer for the recommended 23 minutes. When the bell rang, I inserted a knife into the center to test for done-ness. The recipe stated that "they'll be perfect if they're just barely set and still pretty gooey." Well, the brownie mass jiggled when I shook the pan a bit, and the center was like chocolate pudding - far beyond gooey, and still raw.

So I set the timer for another 5 minutes, only to find little progress.

I set the timer for another 15 minutes, in a fit of impatience and knowing that the brownies were still far from where they needed to be.  Only after that much more baking did I find the perfectly gooey center. So be sure to start with the minimum baking time, but don't worry if it takes longer.


There is no occasion where brownies would be unwelcome - be "Employee of the Month" by bringing them to work, make picnics and barbecues more festive, devour them at a "girls' night in" while watching a movie, serve them after a romantic dinner ... any time, any place, these are perfection. You know you'll want them for Saturday's season opener, The Cowboys Classic, when my #8 Michigan Wolverines take on the #2 Alabama Crimson Tide!


Preheat oven to 350F. Line a 9"x9" baking pan with foil, letting some hang over the edges for easier lifting, and grease the foil.

Melt the butter and chocolates together in a small saucepan over very low heat, stirring constantly. Add 1 cup of the sugar, cook for 30 more seconds, then remove from heat and stir in vanilla. Pour mixture into a large mixing bowl.

Place remaining 1 cup sugar and the eggs into a medium mixing bowl; mix just to combine.

Little by little, pour half of the egg mixture into the chocolate; whisk after each addition to combine thoroughly.

Using an electric mixer, beat the remaining egg-sugar mixture on "high" for 3 minutes; the mixture will become much lighter in color and thicker. Fold this mixture into the chocolate.

Add flour and salt; fold into batter until completely incorporated. Pour batter into pan and bake for 23 minutes; check with a knife to see if center is mostly set and gooey. If too wet, continue cooking in 5 minute increments.

Note: You could add nuts to the brownies if you want to. But they're so dense and so fudgy that nuts could almost be disruptive - crunchiness that interrupts the bite, and which requires chewing rather than just letting the brownies dissolve on your tongue.

Ok, sweet friend . . . You've got me!! BEST brownies ever??? I take this VERY seriously! ;) I think I MUST give these a go this weekend. After all, our dear Julia really can do no wrong!!! Thanks for sharing! I miss you like crazy, and just told Phil we have got to take a look at the calendar and plan our visit! The days are flying by, and I can't let the year go without getting to you! I heard an awesome story on NPR about a writer in Ann Arbor, and smiled the whole time because of you! Hugs!

Ok, now who's the temptress? I could have those brownies for breakfast, lunch and dinner!! They do look marvelous!!

On another note.. I'm so excited about college football starting! Can't wait for the Michigan/Nebraska game this year!!

Oh my my my.....those look amazing! I can't think of a single occasion when those would be unwelcome.

who could argue with the reviews of your brownies? I'm convinced they are no ordinary brownie! My favorite description is the word " seductive".. I might file this brownie recipe away for company..