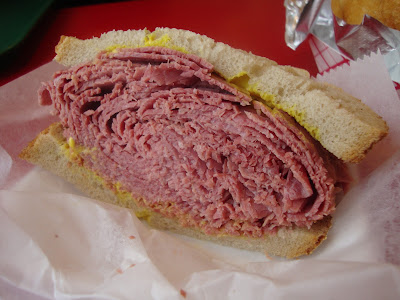 Craig and I both grew up eating exceptional deli food - he in Southfield (a Detroit suburb with a large Jewish community, for those who don't know the area; it even has a kosher Dunkin' Donuts!) and me in New York City. We're kinda snobs about it.

There are so many sandwiches to choose from that easily come in under our $5 per person budget (and many of them are deli classics: pastrami, tongue, chopped liver). And yes, we're sharing today - the portions are so generous that a half sandwich is very filling and more than sufficient. Eat the entire thing, if you want to; but you'll certainly be satisfied with a more reasonable serving. 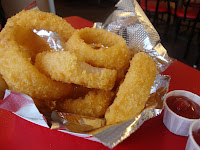 Craig and I split a regular corned beef on rye with a schmear of mustard, which cost $8.99. (A small sandwich is only $6.99.) Thinly sliced meat which was exceptionally tender, a good chewy bread with a crisp crust ... sigh. We both felt right at home, and happy.

We also split a small order of onion rings, which were nice and crunchy. A small order costs only $2.75, and could make a great snack or side dish.

Craig and I decided to enjoy some dessert, as well - a thick, dense slice of cheesecake for a mere $3.79. This is so rich that it could have been a single-serve lunch! It was definitely an ideal portion to share with a loved one. Dry, almost crumbly - as a proper New York cheesecake should be - and not too sweet, this was a fabulous indulgence.

All of the Bread Basket Deli's desserts - which are enormous - cost less than $5 each. Vegetarians can order vegetable or egg salad sandwiches. You can even find a knish, one of my favorite foods, for $4.25. The deli has something for everyone!

So, for good food and a great value, head over to The Bread Basket Deli. 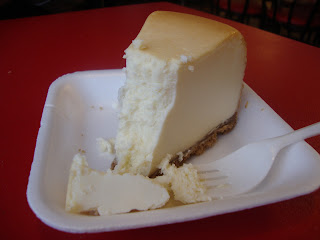 I work with a girl from New York and I know how you New Yorkers like your delis!! lol I can only imagine how good it really was!!

How did I NOT KNOW you grew up in NY? Where have I been :she knocks on head:????

Wow! That sandwich must have a pound of corned beef. I think I'd ask for a couple extra slices of rye and make a whole 'nother sandwich!

I grew up in Westchester County. Miss the corner delis, bakery and pizza by the slice. Can't get a bacon, egg and cheese at the corner store her in Michigan....

Yum, that does sound good.

It looks like a great place and I love onion rings, but I'd forego everything else in order to have a slice of that cheesecake!

Well - considering you are originally from NY.. and you approve... it must be delish!