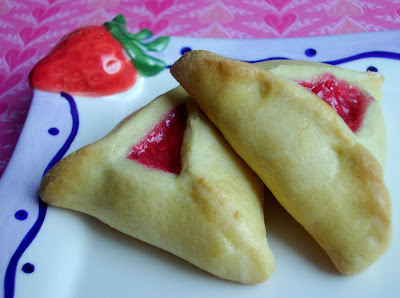 Every year at Purim [POOR-im], which begins at sundown on Saturday night, there is a debate among Jews about hamantaschen [HAH-men-TAH-shen], the triangular cookies that are traditionally served at the holiday.

Some people think that ones with a poppy seed filling are most authentic, as Queen Esther - the heroine of the Purim story - survived on nuts and seeds while she debated whether to "out" herself as a Jew in order to save her people when they were under threat of extermination by the evil vizier Haman.  (Since she was married to the king, she hoped to have a bit of influence.)

Others, however, feel that the prune ones, with a nod to the Old World, are the only true version.

And then ... well, then there are folks like me who respect tradition but always have to tweak it.

In the past, I've made hamantaschen filled with homemade berry preserves, and even made a lemon-poppy version with poppy seeds mixed into the dough and a bright center of lemon curd.

And this year, I decided to try something really different: a variation on coconut cream pie, which you can find today on AnnArbor.com, and a strawberries 'n' cream version ... sigh.

This post, from two years ago, gives the dough recipe and instructions for making the hamantaschen; I didn't want to reinvent the proverbial wheel, and take up time and space by putting it all on here, too, when I know not everyone is actually going to make these. If you're feeling ambitious, go right on over to the more thorough description!

But this non-dairy strawberry filling could also be used for thumbprint cookies, so it made sense to just offer this part of the whole. You could even drizzle your cookies with a bit of melted chocolate, and relish a luxurious variation on chocolate-covered strawberries.

And just look at how pretty and pink the filling is!

In a small saucepan, combine the strawberries and the sugar; cook for 5 minutes over medium heat, mashing berries with a fork.  (The berry mixture will boil.)

Combine cornstarch and creamer in a small cup; pour into berry mixture and cook for 30 seconds or so, just until the filling thickens.  Pour into a small bowl, cover with plastic wrap, and refrigerate until cold.

Love that tradition! And the strawberry ones look delicious, but I could go for the prune or lemon curd too. I'd take all three, so they'd represent Abraham, Isaac, and Jacob. OR, I could order a dozen for the 12 tribes of Jacob. OR...(I'm sure if given enough time I could come up with some excuse to have even more of these delicious little 'hats.'

Again I learned something new! I would love them with poppy seeds as well, but I am not a fan of prunes in baking.

Love your tweaked flavor. You never can go wrong with strawberry :)

I love this idea! I have enjoyed hamantaschen before...but never like this... I think it might be time that I actually try making them! Love this new twist.

What is dairy free creamer?
Coffee Mate? or what is the label at the supermarket?
this sounds like a delicious filling.

I think Coffeemate has some dairy in it; So Delicious is made with coconut milk, and is completely dairy free for folks who avoid casein, who have dairy allergies, who are lactose intolerant, etc.