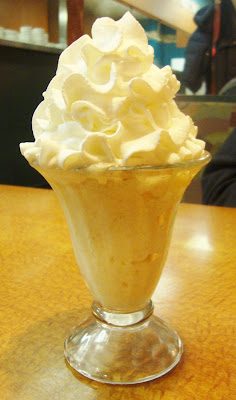 Mark's Midtown Coney Island - a friendly neighborhood standby - is today's Frugal Floozie Friday feature. Sure the coney dogs are great, and Craig thoroughly enjoyed going for the classic. But there are lots of other foods to enjoy that also fit within our mandatory budget of $5 per person. 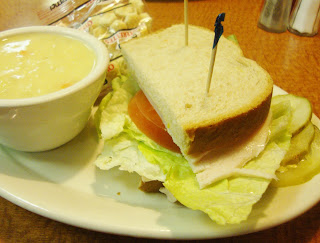 I branched out to the soup 'n' sandwich plate for $4.99, which brought a cup of the daily soup - a bright, creamy Lemon Rice that offered just enough tartness to make it seem light despite being so rich - along with a half Turkey and Swiss that was absolutely stuffed. This was far more substantial than I'd expected, and I enjoyed every bite.

Several of the sandwiches - from Grilled Ham and Cheese to Egg Salad to a B.L.T. to a Patty Melt - come in at under $5 each. The coneys, of course, are a great deal: a single costs only $2.09. Or get the Coney Island Special, adding loose ground beef to your dog, which costs only $3.19. All but one of the burgers (the Italian Burger) cost less then $5, and you can even embellish them with an onion roll for 50 cents or extra cheese for 45 cents. And if you just want a snack, some consummate comfort food like Chili-Cheese Fries costs a mere $3.29.

Breakfast Specials offer a tremendous value as well, from eggs to the Breakfast Sandwich to a Short Stack; even Pancakes and Eggs - "Two pancakes or two French toast, two eggs, choice of one: bacon, ham or sausage" - costs only $4.99, just squeaking under the limit. But the prices get even better if you come in between 6-11 a.m. Monday-Friday, which is when Mark's offers extra special deals on this portion of the menu.

Even as good as our entrees were, I would have to say that the rice pudding - for a mere $2.29 - was the star of the show; Craig said it was the best version he's ever eaten. Dense rather than overly creamy, subtly flavored rather than doused in cinnamon as many can be, this was a perfect serving to share as it was very generous. 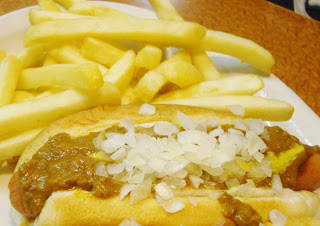 This all sounds amazing. I am a sucker for chili cheese fries.

I wonder if they would slap some dill pickle slices on top of the relish and onions on that bottom hot dog for me. Yum Yum! I had one just like that this past summer and now I don't want to eat them any other way. I may have to have hot dogs this week...just because. :)

That Coney really caught my eye!

I *love* rice pudding, especially with loads of whipped cream applied so very prettily as this! Give me that and a cup or two of Earl Grey, and I'll call it lunch!