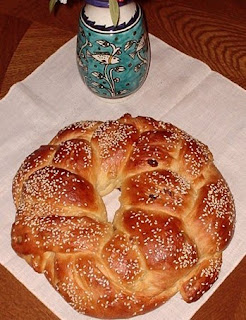 In addition to all of the pressures and deadlines at work to get ready for Rosh Hashanah -- the Jewish New Year -- tomorrow night, there have also been some preparations to make at home.

Standard, long loaves of challah are supposed to be served every Friday night at Shabbat dinner; secular chickie that I am, I'm not that observant. But it is traditional to serve a round loaf at Rosh Hashanah, representing the seamless transition from one year to the next as well as the circle of life. That's a celebration I can support.

I make the best challah, period -- I will often tout a recipe as being very good, but this one is absolutely definitive, truly truly truly. I can't tell you where I found the recipe -- some cookbook I blundered into years and years ago. But it is cherished, and my new year simply isn't complete without it.

I love to bake bread, and often say that I should do it more often ... alas, I bake it for Rosh Hashanah and then get waylaid afterwards. The challah isn't difficult, though you do have to commit to it for about 3 hours; it's not a recipe where you can ignore the dough while it rises, or leave it in the refrigerator to rise slowly overnight.

But every moment -- and every globule of cholesterol -- that you invest in this is worth it, trust me! Soft, fragrant, luscious ... this is bread at its most perfect.

At Rosh Hashanah it is customary to add raisins to the challah, with hopes for a sweet new year; I brush the top of the bread with a honey-egg wash, as well, to increase the symbolism. And sesame seeds are sprinkled on top to represent wishes for plentiful blessings.

I might someday vary the chicken dish I serve at Rosh Hashanah, and I usually change the side dish (I'm thinking of carrots this year, though I'm unsure how I'll serve them; I've also considered yams). I might serve sparkling apple cider one year, though this year I'm serving sparkling pomegranate juice (chosen because it's made from small seeds -- more hopes for bounty). But the one constant in my holiday tradition is that I will always serve a round challah, homemade.

Follow along with the easy instructions below (for standard loaves -- we made one of each), with photos featuring both Tom and me as we create our holiday masterpiece ....

In a large mixing bowl, combine flour, salt, raisins and sugar; make a well in the center, then place the yeast into the well. 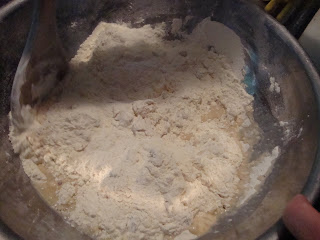 Combine the butter and half-and-half; pour over the yeast, and stir to mix well. Stir in the eggs and the egg white, one at a time, until a rough dough is formed. 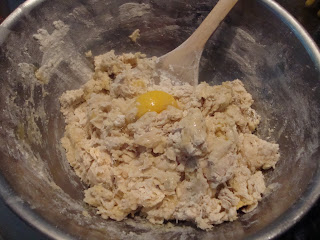 Sprinkle about 1/2 cup flour onto the countertop, and place the dough onto the flour. 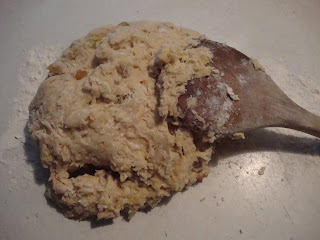 Knead until the dough has absorbed the flour, adding more flour as needed if the dough is sticking to the countertop. When the dough is shiny and very pliable, it is ready. 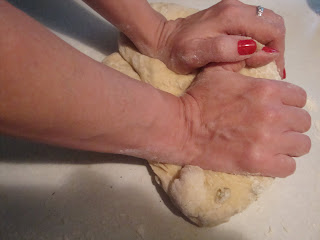 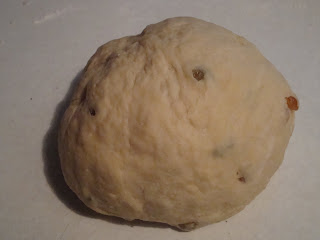 Grease another large mixing bowl and place the dough into it; turn the dough over to grease all sides of it. Cover the bowl with plastic wrap and then place a towel over the bowl 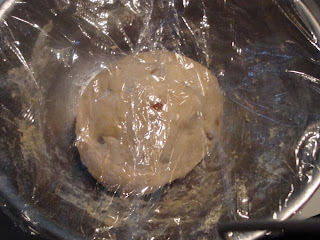 Place into the oven and let the dough rise for 30 minutes. 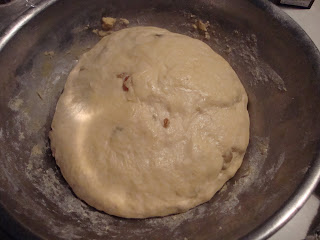 Punch down the dough, knead it for 3 minutes (with a bit of flour added if it's sticking to the countertop), and re-cover it with the plastic wrap and the towel. Place it into the oven and let it rise for 20 minutes. 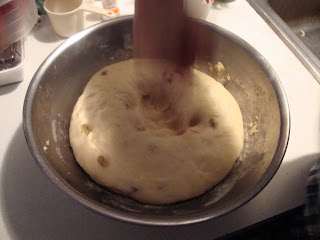 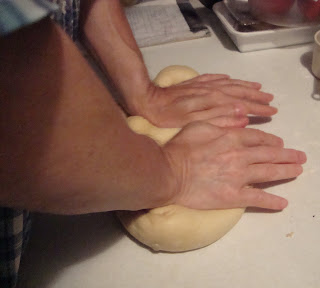 Uncover the dough, place it onto the countertop, and divide it in half. Cover one half of the dough while working with the other.

Cut the dough into 3 pieces and make an 18" rope with each piece. Lay them next to each other and braid the length of the dough. Tuck the ends under and place the braid into one of the greased loaf pans; repeat with the other half of the dough. 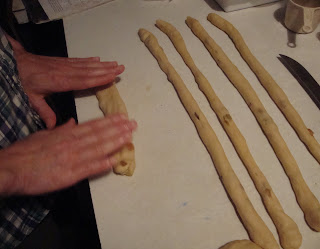 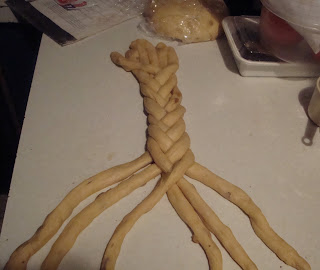 Combine the egg yolk, the honey and the water; brush this mixture over both loaves, making sure to get into the nooks and crannies. Sprinkle with the sesame seeds. 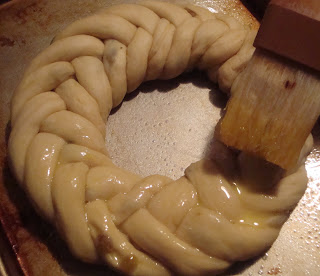 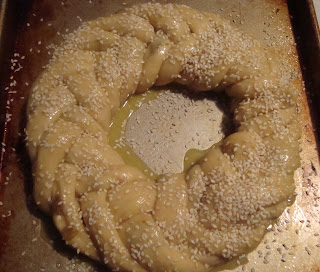 Place the loaf pans into the oven and let the dough rise for 20 minutes.

Raise the oven temperature to 200F, and let the bread bake for 20 minutes.

Raise the oven temperature to 275F, and let the bread bake for 15 minutes.

Raise the oven temperature to 350F, and let the bread bake for 10-15 minutes, until it is golden brown. Remove from the oven.

Let the bread rest for 5 minutes, then insert a knife between the bread and the loaf pan to help loosen the bread. (The honey mixture makes it tend to stick.) Remove the bread from the pan and let cool completely on a rack ... yes, I know this is a form of torture, but it's necessary to let the bread finish. 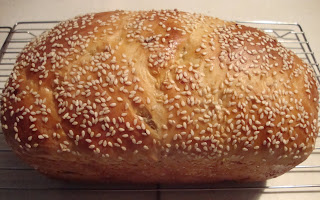 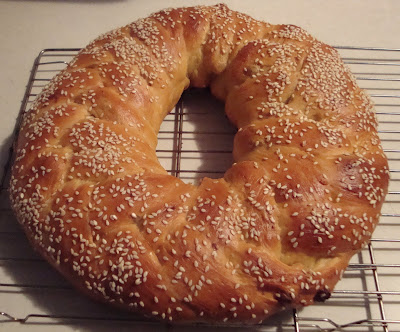 Love this blog name! Just had to let you know that I am now singing the song, but with your new words :)

Hi! I'm a new follower from Tuesday Train! That looks delic! I look forward to reading your blog. Please stop by and follow me back http://atrioofboys.blogspot.com Have a great week!

I'm a long time follower of yours thanks to Tuesday Tag-Along, but i just thought i should stop by and see how you're doing!
And don't forget to check out our amazing giveaway: two custom blog banners! Come on by to sign in and take a brand new blog banner home quick before it ends!
Plus today we teach another one of our easy HTML tutorials, so make sure you don't miss that and check out our Blogger tutorials section for more! Happy Tuesday!

I love your blog! I love to cook too! Can't wait to try your Challah! I've seen that before and have always wondered how they did it. Thanks! CAn't wait to see what else you cook up. ;) I would love for you to visit and follow me.

Visiting from Follow Back Tuesday. I am your newest follower. Please stop in and do the same for me:
http://momtobedby8.blogspot.com/2010/09/follow-me-back-tuesday-september-7th.html

I'm going to give your recipe a try this week. It's looks INCREDIBLY DELICIOUS! Thank you for sharing it.
Shanah halcha, shanah ba'ah
ani kapai arimah;
shanah tovah, shana tovah!

What a beautiful loaf of Challah! I have to admit, I feel like I cheated when I see all the work that went into this loaf and I let my stand mixer do all the work for me when I made bread!!!

Hi!
I am your newest follower from Tuesday Tag-Along. I would love a follow back at:

That is just absolutely gorgeous! It loWhat a work of art! :-)


I'm stopping by from Tuesday Train. Love to find new blogs to follow. I'm following you, no not really I'm not behind you I promise there is no need to look. But I am following your blog!

Thanks for joining the Tuesday Train. Have a great week!

Hi there, we are your newest followers! We hope you will come visit us at www.justmarriedwithcoupons.com, Have a great day =)

No matter how hard we try, pareve baked goods can't hold a candle to the real thing.

(side note: the most fun I have at Jewish weddings is crusing the hopes and dreams of the non-Jewish guests when they see the sweet table.. "That's not ice-cream/real cream filling/real custard... it's edible oil products. Enjoy.")

Hi; great Blog, I'm coming over from Tuesday Blog and are following you on GFC now; would love for you to visit me over at
www.twoboysonegirlandacrazymom.com
happy Monday
Melanie

I love the title of this post. L'shanah tovah Mary.

You know I won't be baking it, but it looks good. I just wanted you to know I was here checking in on you and to tell you that I hired a spycam with my limited funds to track you down. That is how I get my HERE'S TO YOU THURSDAY video information right on target...lol.

Yum! That looks so yummy and and I love your blog background.

I found your blog on Follow me Back Tuesday! Have a great night.

Wow the carbaholic in me is drooling all over my computer. Looks so yummy. Bliggity Blog Hoppin' I'm now following you hope you'll return the favor! Hope you had a great labor day weekend JaMonkey!

That challah looks so good! Thanks for sharing the recipe.

OK yes, after seeing these pictures I agree, yours must be the best of all! I'm too intimidated to bake bread. I make my hubby do any dough-involved projects!