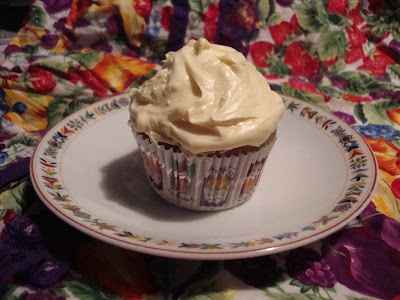 My very dear friend Marilyn volunteers at the library we have where I work; and in sorting through the collection one day about a year ago, she found a priceless treasure hiding behind other books on a shelf -- The Molly Goldberg Cookbook, written by Gertrude Berg and Myra Waldo. And because she loves me and knows that I would cherish such a precious item, Marilyn let me borrow it first ... or, rather, let me be the first to borrow it in about 40 years!

People in my parents' generation (folks in their 70s/80s, that is) remember the radio and t.v. shows called "The Goldbergs," featuring the actress Gertrude Berg who played Molly. There is a fairly recent documentary (which, unfortunately, I still have yet to see) called "Yoo Hoo, Mrs. Goldberg!" which showcases Gertrude “and the massive appeal and influence of (her) Jewish American … character.” Molly was quite the yenta -- “lovingly meddlesome," a stereotypical warm-hearted bit of a busybody -- in an increasingly assimilated family trying to retain its identity. And the cookbook Gertrude wrote in her character's name displays that generosity of spirit in abundance.

My favorite aspect of the cookbook is not the food, but rather the kibbitzing at the beginning of each section or accompanying some of the recipes:

“I find that sometimes my daughter is walking around the house without her head. I don’t have to ask the trouble, I know already there’s a boy someplace.”

“Some nights I have a previous with the P.T.A. [sic] And on those days Jake stays late at the factory, so I prepare this recipe for him to cook when he gets home …. There’s supper all good and hot and tasty - at least I haven’t had a complaint yet, but maybe that’s because Jake is so glad to see me home at long last.”

It seemed appropriate for Rosh Hashanah to try one of Molly's recipes -- a good traditional, old-fashioned recipe for my favorite Jewish holiday. And so I settled upon Honey Cake, but baked the batter into cupcakes instead.

The recipe was very straightforward, coming together just as expected. The cakes turned out beautifully, and were perfect topped with the crowning glory of a caramel buttercream frosting (my own concoction). Jeremy gave these rave reviews! They're a perfect sweet treat to usher in the new year ... :)

Make the cakes: In a large bowl, beat together the eggs and the sugar until light in color. Mix in the coffee, honey and oil. Stir in the flour, salt, cinnamon, baking powder, baking soda and nuts. Divide the batter among the muffin cups and bake for 20 minutes, until a tester inserted into the center comes out clean. Cool completely before frosting. 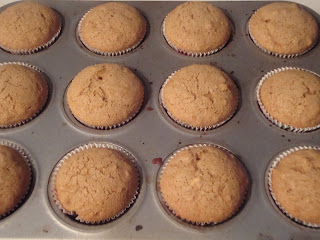 Make the frosting: Beat together the butter and the brown sugar. Alternately add milk and confectioners' sugar, beating until smooth with each addition. Spread the frosting onto the cakes.

Oh yeah! I'm going to make these today! Perfect timing! We were just given 1 qt of fresh honey a few days ago and I told my hubby this stuff is for cooking and baking! You saved me from having to search around today for something to bake!!!

Thank you! I use to collect old cookbooks. They are so fun to read!!!

These are adorable and they sound delicious!! I might just make these with the kids this week! Thanks!

I love honey cakes. One would go really well with my coffee right now!!! I love the little line about walking around the house without her head!! Too funny!

This is absolutely fascinating! Seriously. First of all, the honey cakes sound divine, and second of all the the show sounds really interesting. Now I will probably spend a little time looking her up!

I hope this blessed holiday is going well for you! (Happy New Year, right?)

oh yes, and that Molly Goldberg cookbook sounds wonderful. I'd love reading it, and not just for the recipes. :-)

I've never seen a honey cake with coffee, how strongly does it come out in the flavour? I'm assuming that's okay for the kiddies as long as it's not Starbucks JetFuel[TM] strength.

Honey Cakes Huh? Never heard of them before. They look interesting enough. Now I have to go do some research. Loved the link.
Thanks.

The Molly Goldberg Jewish Cookbook is one of my prize possessions. I bought it when it first came out, and then bought one for my mother. Over the years I've made the honey cake, the noodle apple pudding, onion lukshen kugel, jelly cookies, kasha varnishkes and many other delicious recipes. Everything was so delish. I could never be without this book!