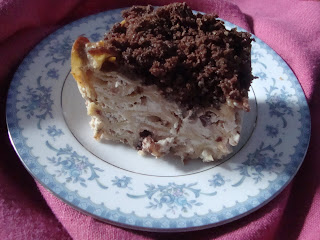 I love kugel [KOO-guhl] -- a noodle pudding served for dessert or as a side dish. I absolutely adore it. It's sweet, it's creamy, and I can delude myself that it has redeeming nutritional qualities because I use part-skim ricotta, low-fat sour cream and whole wheat noodles.

Of course, reality is quite the contrary to this little fantasy. There are eggs (though only 2 for the entire 9"x13" pan!), there is butter in the topping (but only 1/4 cup!), and both sugar and brown sugar make appearances. Oh, well. Sometimes you just have to have some fun, and then run a marathon ... or at least contemplate the prospect, hoping it will burn off at least a few calories if you think about it really hard.

Jeremy has been asking me to make a chocolate-cherry kugel for awhile now. Well, I needed to make food for Rosh Hashanah, right? Holiday food. Celebratory food. And it's not a Jewish party without kugel. So, this was the time to try it.

I took my basic kugel recipe, added some of the hand-pitted cherries I'd frozen this summer, threw in a generous quantity of chocolate chips (because why be stingy with them???), and substituted chocolate graham cracker crumbs for the standard ones I usually use for a topping. I put it into the oven while Jeremy and his buddy Robby were upstairs, and when they came out of Jeremy's room I heard them say "It smells good in here!" and "It smells like pie!" Aromatherapy at its finest!

And in summation, let me tell you what Jeremy's friend Andrew said when he got a chance to try it: "This is like eating crack."

Combine cherries, 1/2 teaspoon almond extract and 1/4 cup sugar in a small bowl; let macerate for 1 hour, then drain and chop. 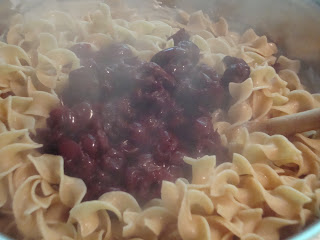 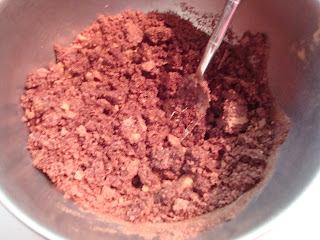 Spread crumbs over the top of the noodles, then bake the kugel for 45 minutes until the edges are bubbly and a knife inserted into the center comes out nearly clean. Let the kugel rest for about 10 minutes before serving. 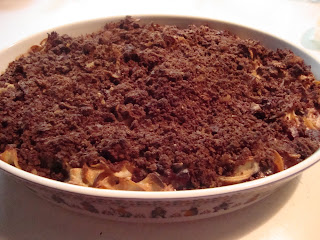 OK, I am up late and this indeed looks like a plate full of crack heaven--I have pitted tart cherries from the CSA and have been wondering what to do with them. Now I know...

Its seems so delicious, weww mmmhhh :)

Yum! This sounds so delicious! Thanks for sharing. Visiting from Meet & Greet. Happy Monday! :o)
Larri at Seams Inspired

Here from the hop, so fab to meet you here on line but should never have read this post prior to having breakfast!
ugh ... diet, diet, diet ....
must, must, must ....

This looks fantastic! Now that I have a kitchen I can actually make some of your recipes :)

Noodle pudding? I've never heard or seen anything like this before...but I want a big chunk right now!! It sounds wonderful!

Hi! Following you for Making Friends Monday! I'd love a follow back!

I've never heard of this!!!! That is very interesting and looks really good!!! Thanks for sharing! :)

Oh Mary, you did it this time! This looks so decadently declicious I'm appreciating Jeremy's friend's metaphor. I gotta try this one for sure and the tutorial couldn't be clearer. Happy Rosh Hashanah! Who knew I'd love kugel?

Following from Meet Up Monday!! Hope you can visit me at: http://imo-fwiw.blogspot.com/. It's Mom Friendly Meals Monday!

I've never heard of this before, but it sounds really interesting! Especially with a slight healthy factor. I started a weight loss challenge for myself and I'm searching for recipes...perhaps I'll give this a try!

Looks delicious! I need to run a marathon by just looking at it!

Good to see you on Making Friends Monday! My inspiring messages are now available on Twitter. Stop by and sign up!

Oh my! I have never had kugel before; but this looks amazing. Chocolate, cherries..... you just can't beat that combo!

Oh dear... eating crack. I am beginning to think it is a good thing we live so far away...lol.

I know kugel sometimes teeters between side-dish and dessert. This doesn't tip the scale, but rather tosses it so far into the dessert field that it'll be difficult to bring back.

I've sooooo got to try this. Kugel is one of the few things I "bake," but given your the graham cracker topping, cherries and the chocolate chips, it might need to go to our baker instead.

Did you say noodles?? I'm not kidding. I read this post twice. I just can't seem to wrap my brain around it. The picture looks amazing, then I get to the noodle part. I've gotta go back and read this again.

And while I'm re-reading it, I'd like a piece, please.

Thank you for linking up at Hearth and Soul. Kugel is an old comfort food for me, especially so when made with whole milk and cheese :)

I didn't know kugel was made with noodles and all sorts of dessert ingredients. I would love to try some! Thanks for sharing with the Hearth'nSoul blog hop!

Happy New Year Mary!
this looks devine, i will have to try it.. maybe i will switch out the past to whole wheat pasta though lol... i can smell it now!
hugs,
shelley
http://im-stillstanding.com

Oh my, your kugel looks scrumptious! I can almost smell it just from how you described it too. I'm definitely going to have to try making it!!

Yenta Mary, I hope you had a blessed new year! I am here to make you feel a bit better about your Kugel! First of all, butter is filled with DHA and saturated fat which is great for your brain, nerves and keeps your hormones in balance. It also helps build healthy new cells in your body and keeps your skin soft and smooth and wrinkle free. Eggs are also high in many fat soluble vitamins, great protien and again, dha to keep your brain functioning well. That, coupled with the LOVE you put into this recipe and the tradition you are following with your faith makes this a VERY soulful and healthy recipe~!!!! Thanks so much for sharing it on the Hearth n Soul hop! Alex@amoderatelife