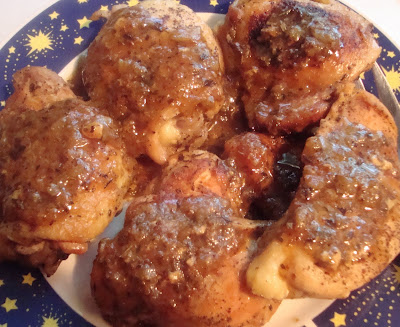 Point-blank, this is my favorite chicken recipe. I'm a good cook and baker, though hardly a Michelin-starred chef; I like to think that I make a number of really delicious things to feed my loved ones. But if I could only pick one dish -- one shining example from all the thousands of foods I've prepared over the years -- this Cider-Braised Chicken would be the one I chose as my specialty.

I've been making it for several years, and was so proud of it that I entered it into a Passover recipe contest that Empire Kosher Poultry held in May of 2005. Yeah it's more of a Rosh Hashanah recipe, with apple cider as a key ingredient, than a Springtime one; but it met all the requirements -- featured chicken, was kosher (no mixing of meat and dairy products) -- so I sent it in ... and I won 2nd Prize! I was so thrilled!!!

This dish is special enough for a romantic date or a special event, but also easy enough that it could be served at any time. It's fragrant, tender, luscious. And I've even served it to picky eaters who've actually then begged for seconds ....

*There are many, many varieties of herbes de Provence, which is a mix of thyme or fennel or savory or rosemary or other herbs, often with lavender mixed in. I bought a jar recently that smelled like oregano, that appeared to have no lavender in it at all ... this was not good. Find a mix that doesn't have one overpowering ingredient, and be sure the lavender is there, too.


Heat oil in a large, deep-sided skillet over medium-high heat. Season both sides of the chicken with the salt and pepper, and place into the skillet skin-side down. 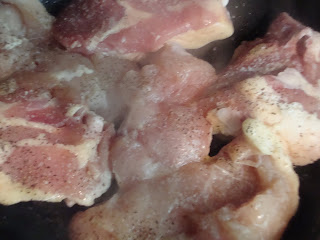 Cook for 10 minutes until nicely browned.

Turn the chicken over and cook for 5 minutes on the other side. Remove the chicken to a platter.

Pour off most of the fat, then sauté the shallot for 1 minute until translucent. 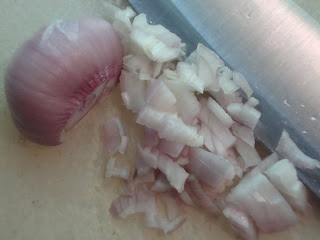 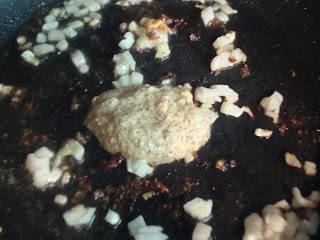 Stir in the cider, and return the chicken to the skillet. 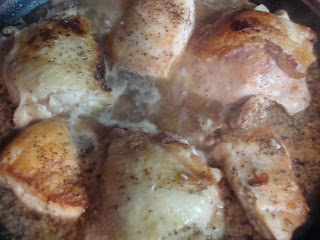 Cover the chicken and bring it to a boil, then lower the heat to simmer for 45 minutes. Place the chicken on a serving platter and boil the sauce down to reduce it until it has thickened and become caramel-colored.

Pour the sauce over the chicken and serve hot.

MMM, that is going into my "try" file of recipes! YUM!
I'm not sure I've ever had chicken made with cider vinegar though. I bet it would be a hit around here though.

Thanks so much for stopping by my hop! And posting my button!

Oh my that chicken does look delicious! I can see why it's your favorite. I love using herbes de Provence, but don't find always find a lot of uses for it. I can't wait to try this!!

I am vegetarian but my DH & DDs are not, so I am always looking for good recipes for them. I'll take your word that it's delicious and give it a try! :-) Thanks!

I'm just stopping by from the Thursday hops & am now following!

I wanted to let you know I've given you a blog award!

Thanks for this great sounding recipe! I've been trying to think of something to serve guests tomorrow night and this is going to be it!

I'm glad to hear that lavender is supposed to be used in chicken. You might enjoy this post about my experience with lavender. :-)

New Follower following you from the Blog Hops. Would love it if you came by my blog and did the same!

Oh Mary, how you tempt me!! Cider and chicken? Really?? Its like you're in my head reading my thoughts of what sounds delicious. I've bookmarked this recipe and will be making it. SOON!! Thank you thank you thank you!

this sounds too delicious for words!!!

I am definitely going to be trying this one!!

I just saved that one to my favorites. My mother is constantly buying chicken thighs. They aren't my favorite chicken parts, but now we can eat them a new way. Sounds yummy.

New Follower from Thirsty Thursday! I made Tuna Melt Pie and have pictures. Check out my blog @ www.missysalsa.blogspot.com
That chicken looks yummy!

I'm your newest follower from thirsty thursday. That chicken looks awesome. I might try it. I also blog about food ALOT! You can find me at www.bouffeebambini.blogspot.com

I am your newest follower from the Friday Blog Hop. I hope you can follow me back at http://mylifeadventurebyme.blogspot.com/.
God Bless,
Shelley

This looks like a great Friday night chicken dish. I think I'll need to make this next week.

OMG that looks WAY too good to be chicken! I'm so trying this one. I'm so sick of all the chicken recipes I have.

I'm having a recipe link up this weekend and I'd love if you would add this! I think my friends would LOVE it!

Oh that looks GOOD! Thanks for linking up to my Open House!

Well, with a set up like that I'm definitely going to have to try it. YUMMY!

made it last night with some substitutions and it tasted great! I imagine if I actually had herbs de Provence it would've been even better.

I will have to try this real soon! It looks delicious! I am always looking for good chicken recipes.
When you get a chance visit me @www.happyfamilyhappykids.blogspot.com