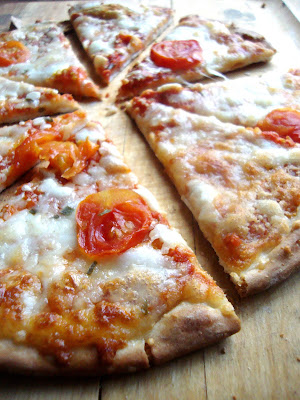 I was recently given a great opportunity to taste test the new frozen foods that Whole Foods Market has introduced. Ranging from appetizers to ready-to-heat meals, and - very importantly! - not neglecting the all-important dessert, Whole Foods has made life easier whether you're just trying to serve dinner or whether you're hosting a fabulous party. 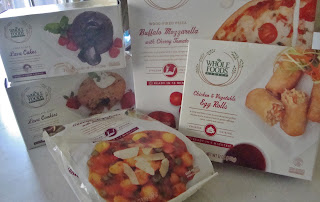 I took the $25 gift card I'd been generously given, and started to meander up and down the frozen food aisle. Now, anyone who's ever seen me at the grocery store knows I alternate between speedy efficiency (since I practically live at grocery stores, I know where everything is without needing to hunt) and aimless wandering as I consider my options. At Whole Foods last week, I was engaged in the latter.

Because first of all, I knew I had to get pizza. But which of the three pizzas? At $5.99, I could get one of each, but then my other taste testing options would be limited. Knowing that neither Jeremy nor Craig would likely choose a pizza bearing green vegetables (oy!), I bypassed the one featuring arugula and instead chose the wood-fired variety topped with buffalo mozzarella with cherry tomatoes.

The pizza was a huge hit, and both guys said that they'd eat the entire thing themselves despite the package stating that one pizza serves two people. Cut into small portions, it would make an excellent appetizer at a party. 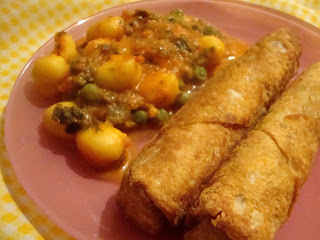 Next on the menu was the Gnocchi di Polenta with Peas & Kale.  Whole Foods has also developed skillet meals that require some add-ins; I thought it would be nice to see how one of the "heat-'n'-eat" dishes was, since it could be prepared so quickly even on the busiest work/school/shopping/traveling day. The one-pound packages of Italian meals cost only $3.99, while the Asian ones cost $4.99.

The gnocchi are prepared in Mongrassano, Italy, and only need a bit of oil and water while being heated. An easier dinner would be hard to find!

Both Craig and Jeremy enjoyed these small cornmeal dumplings very much; Craig even finished my helping. And then we moved on to a different country's cuisine, with the very crisp and crunchy Chicken and Vegetable Egg Rolls that required just a short time in the oven to be ready for hungry diners. A box contains 4 egg rolls, for only $3.99. Whether indulging at a family meal, or cutting them in half to serve as appetizers or hors d'oeuvres, this is a great value. Jeremy, in particular, really enjoyed them. 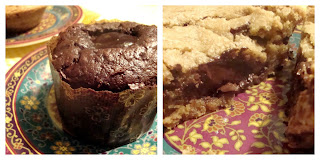 Dessert was easy to choose, and I had no qualms about selecting two varieties: Chocolate Lava Cakes ($3.99 for 2/box) and Chocolate Chip Lava Cookies ($3.49 for 2/box).

Both required only a short time in the oven to become warm, fragrant, and gooey when cut open - molten chocolate oozes out when you slice these decadent little treats. The 100% fully loaded chocolate dessert was my favorite, though this was a pretty tough competition to judge! Jeremy and Craig both preferred the cookie. Whether serving these for a holiday event, at a dinner party, or just 'cause you need a chocolate fix, they will make you very happy.

Thank you so much to Whole Foods for the opportunity to taste so many goodies! For family meals, for parties, or "just because," these wholesome foods will make your life easier ... and more delicious.

I know that so many people stick their noses up to frozen foods, but some times they truly are a necessity... so when you can find really good quality ones, it's a definite hit! Thanks for giving us your opinion on these.

Whole Foods how I miss thee! These interesting treats that you've found are some of the many reasons why I love to shop there. I just can't find things like this in other stores. It all looks yummy!

Mary, I'm glad you posted this. I'm quite a distance from the nearest Whole Foods so rarely go, but one is opening in my area in a few months, so I'll have to give those egg rolls a try!

I'm looking forward to Whole Foods opening their first store in Knoxville in the very near future. I drive by the site they have chosen EVERY DAY on the way home from work. Right now it is just a vacated furniture store and strip mall, they whole thing is going to be razed and rebuilt.