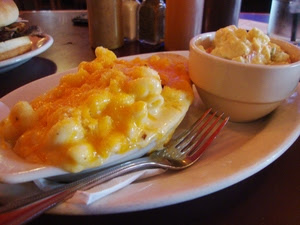 Well, it's that time of year again - time to review everything I've eaten, drunk, tasted, sampled, and enjoyed this past twelve months. There's been a lot o' good eatin', as always - I live in a fabulous community filled with great food, restaurants, shops, and other treats! But as I remember and reminisce, there are inevitably a few shining stars that rise to the top of the list.

And so, without further ado, here are some of the very best things I enjoyed in 2012. I highly recommend that you go find them, cook them, and relish them, too!

The barbecue at Red Rock Downtown Barbecue in Ypsilanti is excellent; the mac 'n' cheese (pictured above) is even better. Here's what I wrote in my Frugal Floozie Friday post about the restaurant: "the star of the show - the star of the entire meal - was the Macaroni and Cheese. What you see ... is the small version ordered off the side dish menu; it was enough that I could very well order it for a full meal! And I'd be lucky to finish it ... though it was so exceptionally rich and smoky and luscious that leaving any behind would be unforgivable. Jeremy and I literally scraped the bottom of the dish to make sure we didn't miss any of the goodness!"

After you eat the mac 'n' cheese for dinner, walk across the street to Bona Sera Cafe and linger over the luxurious Salted Caramel Gelato for dessert. You only have to spend a mere $1.50 for this rich treat.  This past summer, I posted that "if the salted caramel gelato was my last dessert on this Earth, I could die blissfully happy in a giddy reverie. It was buttery, salty, and like liquid gold as it melted on my tongue. I've been craving it since I left, and promised Wonder Woman I'd be back for more."  I need to get back there, and you need to make a special trip yourselves. 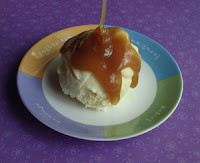 Not too far removed from the buttery sweetness of the gelato is my very own Drambuie Butterscotch Sauce, which doesn't even need cake or ice cream, just a spoon. I'm always loathe to include my own recipes in this annual list, as it seems a bit conceited; at the same time, this really was stellar and I'm very proud of its flavor as well as its simplicity. It's a lovely change from traditional hot fudge sauces.

Another item which can be enjoyed in a variety of ways - on a salad, as a vegetable or pretzel dip, schmeared onto a sandwich - is the blue cheese dressing at Old Town Tavern. It is "an exceptional thick, garlicky blue cheese dressing so good that I've even written to the restaurant to see if they might share the recipe with me." (Still hoping to be able to make it myself, though I'm happy to go pay for it at the restaurant, too.) Unfortunately, I don't have a picture of it; but it's not too hard to imagine a dressing with generous chunks of cheese, which is thick enough to cling to whatever it's going to enhance. 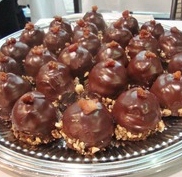 I am a huge fan of chocolate, of peanut butter, and of chocolate served with peanut butter; this is, as we all know, one of the classic combinations. In September, I was thrilled to help judge the Girl Scout Cookie Bake-off Benefit, featuring desserts prepared with Girl Scout cookies. The treat that won 2nd Place for "Most Creative" was the Peanut Butter Bombe created by Cheryl Hanewich of La Dolce Vita. This was rich, creamy, seductive, filled with rich peanut butter and topped with smooth, sleek chocolate ganache. It was even garnished with candied bacon - the sweet/salty combination reigned supreme!

Now, to go back to the savory rather than focusing upon the sweet .... 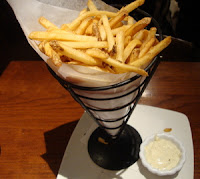 The Jolly Pumpkin Cafe & Brewery is noted for its beers; however, when I go out I'd rather spend my money on food than on drink. For a ridiculously fair $5, the restaurant offers an exceptional snack that Jeremy and I enjoyed immensely: Truffled French Fries. As I wrote in my original feature: "They were utterly irresistable - so crisp, so fragrant with rosemary, so subtly and perfectly flavored with truffle and salt - that we'd have each happily devoured our own serving rather sharing. The fries were perfectly complemented by a rich mayonnaise-based dipping sauce - ketchup would be a sacrilege. I've already made a note to myself that these fries will be on my Top 10 list for the year." 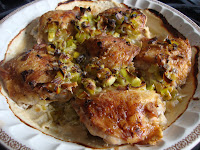 When I served Baked Chicken with Morels and Leeks, Jeremy told me it was the best chicken dish I've ever served. Wow! In the post about it, I wrote: "The chicken, having baked in cream, is fork-tender. The sauce is luscious, and lets the leeks and the morels shine without either one overpowering any other ingredient." You don't need to spend a fortune on the ingredients: chicken thighs are inexpensive, and a few dollars' worth of morels are all you need to infuse a rich, indulgent flavor to the sauce. Be sure to make this during the all-too-short morel season! When I noted to Jeremy that I was including this dish, he reiterated: "I don't think there could be anything better in the history of ... ever!"

Baconfest Michigan is one of the best events I've ever attended; Jeremy and I were in our glory, eating bacon in everything from sliders to grits to ice cream! (Here's my summary of the party.) But of the multiple options served by 30 vendors who celebrated everything glorious about the pig, my favorite treat was the bacon-coated caramel apples from The Root Restaurant & Bar. The apples were tart and crisp, the caramel was smooth and creamy and buttery, the bacon was chewy and salty. Altogether, these hit every taste bud, offered every texture. They were utterly sublime.

Fruit 'n' Nut Baklava - my own spin on this beloved traditional dessert - was a huge hit with everyone who tried it. The flaky layers of phyllo dough, the sweet chewiness of the dried fruits, the crunch of the nuts, the hints of dates and cinnamon and honey throughout. Baklava has a reputation for being difficult to make, but this isn't true at all; one of the beauties of phyllo dough is that, while it's very fragile, it also doesn't really matter if you tear it while layering it - the dough will crack and crumble anyway, so who's going to know??? Try this recipe for yourself and see how easy it can be to make something so impressive. 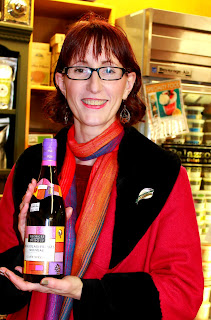 And finally, here is a lovely wine that Craig and I enjoyed immensely, celebrating its annual release in November. The bottle of Beaujolais Nouveau that I purchased at The Produce Station was wonderful - light, fruity, sweet but not overly so, juicy, bright, and vibrant ... it was definitely our favorite of the variety of wines we've tried (with dinners, at events, at tastings, etc.).  As I paid for my purchase, the fabulous cashier noted that my outfit perfectly matched the bottle; she gleefully called for Jorge, wine steward extraordinaire, to bring the camera so she could take a picture of me with my prize!

As Frank Sinatra sang, it was a very good year for my continued adventures in celebrating food. This list doesn't even begin to encompass all the wonderful creations, the fabulous dishes, the friendliness of service, the helpfulness of staff members, and other attributes which contributed to celebrations, to moments that required comfort, and to the many instances where food was integral to an experience. Whether a guilty indulgence in doughnuts at midnight, brownies offered as solace, or a milkshake shared with someone you love, food is so much more to us than mere sustenance.

May 2013 bring you much luck and happiness, and an abundance of good things to enjoy!

OMG... just another reminder of why I wished I lived closer to you!!!

Oh man. This all looks amazing. I can't stop thinking about the Mac n' Cheese. I wish I lived close enough to try all of this!

You had some delicious food adventures this year .... hoping you'll have even more in the upcoming year :)

You have my permission to be conceited about that butterscotch sauce and chicken - mmm mmm! And I love the photo of you matching your wine label - I must remember to do that at my next wine soiree!

That mac and cheese in the first shot...I want to bathe in that.