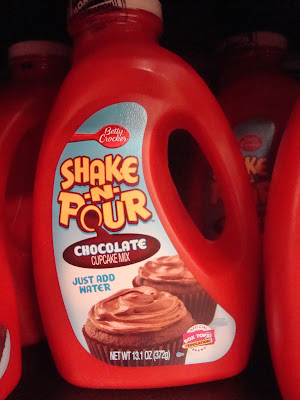 What is this nonsense??? (I'd be a bit more crass and use a different phrase, but I try to be ladylike. This image really warrants a more vehement expression of horror, though!)

Jeremy and I saw this container at the grocery store last week, as we meandered up and down the baking aisle looking for real ingredients like flour and sugar and such. "Just add water" - does anyone really want to eat dehydrated/rehydrated cupcakes?!?!?

Frankly, this is making boxed mixes look good; at least you have to add an egg and some oil to that concoction. Who'da thunk there'd be a product that makes a pre-measured mix look like it's either labor intensive or more enticing???

It's not particularly hard to make your own cupcakes. My Special Mocha Cupcakes (renamed by Taste of Home magazine, they were originally Quadruple Chocolate Cupcakes) list a prep time of 25 minutes which is, frankly, excessive; the baking time is 20 minutes. Add a bit of cooling time, and you can likely have fresh, fragrant cupcakes within an hour. And you get to lick the bowl and the spoon after you make the frosting.

Or, hey! If you don't want to bake from scratch you could buy some cupcakes at a bakery or, even, at the grocery store. Some of these are chemical-laden, some of them are fabulous ... go for quality.

But who on Earth would want to add water to a bottle that looks as though it should be holding laundry detergent, shake it up a bit to jostle all the dry crumbs loose and try to emulsify them with the liquid, and then pour this goop into cupcake tins? If you're that pressed for time, that bad a cook, or - let's call it as I see it - that lazy, then why bother??? So you can claim that they're "homemade" because technically they were made in your home, even if you didn't mix any of the ingredients and didn't have to exhaust yourself by holding a spoon and stirring?

'Cause even if I'm feeling generous enough to consider that you might want to make cupcakes this way with your kids, because it would be quick and easy, let me assure you that they'll be less than impressed by just pouring water. They actually like measuring, spilling sugar, stirring, slopping batter everywhere except into the baking tin ... and this is what memories are made of. Which would you rather have: a picture of your child turning on the faucet or a photo of your child's beaming, chocolate-schmeared, flour-dusted smile of satisfaction from having actually baked cupcakes him- or herself?

My loved ones understand my rant, and would wonder what sort of replicant had taken my place if I didn't obsess about this. But they also try to play Devil's Advocate by telling me that I'm unusual in my affection for baking, that I will make time for such an endeavor whereas others feel that it's a burden in their busy schedules. I offer the rebuttal that bakeries would be happy to sell their wares to these kinds of folks. And that's pretty much the sum of my argument - make the cupcakes properly or pay someone else to do so - because the rest of it is just my incensed, raving monologue about sacrilege.

So, if you can explain to me why this product exists and who would use it, I would be most grateful. I won't be happy, but at least there might be some comfort from comprehension. But right now, I consider this shake 'n' bake crap to be a desecration of the beautiful entity that is a cupcake. And I will defend my beloveds with all of my passion!

lol... great post! Yes, I want to know too.. what is that crap? I have to agree with you 100%.. at least make them from a box mix if you want ease!! I've not seen this before and I'm hoping I don't ever see it again!! Ok, ok.. if the government ever starts rationing eggs again, than I could maybe having this on the shelves... but until then.....

First moment I saw the picture I thought it was a laundry detergent.... I am with you 100%.I am just speechless.

Haha. And believe it or not, there will be those who find that even pouring it from a bottle would be too difficult. :-)

Yuck. We cook from scratch in this house. It is messier, but if you are going to eat that many calories, shouldn't they be delicious?

How crazy are shake and bake cupcakes???It's scary to think that a product like that might actually taste good. Sugar, fat, and carbs are enticing in any form. I shudder to think how bad it might be for you and certainly no substitute for real food.

Why on earth would anyone bother?! If someone is that much of a non-baker, just buy some cupcakes from a bakery!