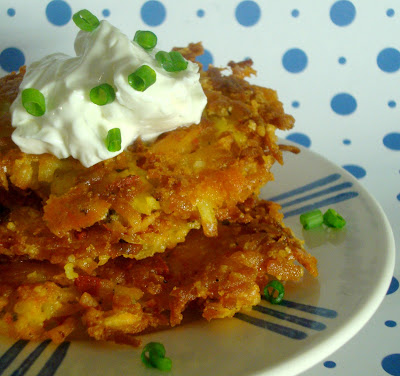 "These are the best latkes ever!"

Jeremy has spoken. You should listen.

These combine all the crispiness of fried potatoes with all the goodness of a loaded baked potato that's been cut open and filled with cheese, green onions, bacon, and sour cream. These are a very good time.

You'll notice that I didn't use real bacon - you may substitute this fine ingredient, if you'd like to. When I prepare Jewish food for posts, I always respect the dietary laws that forbid combining meat and dairy products and also ban anything having to do with pig. But really, truly, even with fake bacon, these were exceptional.

Chanukkah is a minor holiday that began this past Saturday at sundown, but it's a festive and fattening party which celebrates the miracle of one day's worth of consecrated oil having lasted eight days. The Eastern European (Ashkenazic) tradition is to eat latkes, the Israeli one offers sufganiyot [soof-GAHN-yoht] - jelly doughnuts.


If you'd like to try other celebratory foods during Chanukkah, here are some options:

Pour oil into a large skillet to 1/4" depth; heat over medium heat.  Take 1/4 cupfuls of latke batter, and fry for 5 minutes per side until golden; drain on paper towels.  Continue frying until batter is used up, stove and countertops are greasy, and your entire house smells of cooking oil ... ah, the traditions of Chanukkah!

You are a genius!!! Thanks to you, I made my first latkes last year... now thanks to you, I'll be making a new version very, very soon!! YUM!!!

Yeah these look good!! Totally delicious. I love a fried potato in any form :) Yum yum yum, even with fake bacon LOL

I LOVE a good latke! Happy Hannukah, my friend!

Oh my I love Latkes! I think this is going to be a must make recipe. Maybe I will introduce them to my husband!

This sounds great, even with fake bacon.

These are best latkes ever, Mary! Yum!

Oh my goodness! I would love to eat jelly donuts OR those crispy latkes or both! Happy Hannukah to you! I wonder if I could make them that crispy. LOVE crispy.