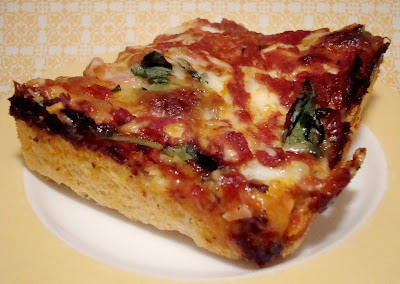 I read an article in the Detroit Free Press recently that talked about how pizza from this area is starting to get recognition around the country. Everyone knows the famous New York City foldable slice that I grew up eating, the Chicago deep-dish pie, and the unconventional and quirky toppings of California-style pizza.

But pizza from Detroit? Huh? Don't they call that Little Caesar's or Domino's, both of which were founded here in Michigan?

The newfangled pizzas were apparently first made in this area at Buddy's Pizza (then called "Buddy's Rendezvous") in 1946. The unusual style, and its immense popularity, inspired others to copy it and perfect it. The pizza has subsequently evolved and become very distinctive and unbelievably good. It really is its own unique, savory entity.

So, after all of this preamble, what, precisely, is Detroit-style pizza???

Well, here are its characteristics:


Brandon Hunt, co-owner with his brother, Zane, of VIA 313: Authentic Detroit Style Pizza in Austin, was quoted in the Free Press article: "When you grow up in Detroit, you just think that's pizza ... that everybody knows it. But it's really a Detroit thing. It's great, and we thought people should be able to experience it."

Shawn Randazzo, of the Detroit Style Pizza Co., won the 2012 Las Vegas International Pizza Expo with a Detroit-style pizza, a first for the competition. Jeff Smokevitch, raised in a Detroit suburb but now making his hometown's unique pizza at his Brown Dog Pizza in Telluride, Colorado, came in 2nd overall in this year's contest.

To see if Detroit-style pizza is available near you, or to learn more about this growing phenomenon, check out Shawn Randazzo's DetroitStylePizza.com.

Or make the pizza in the picture at the top of this post. You know you want some!

In a large mixing bowl, combine yeast, sugar, and 3/4 cup water; let proof for 10 minutes. Stir in remaining water, salt, 3 cups flour, and garlic powder. Mix well. Turn dough out onto a countertop and knead in the remaining 1/2 cup flour until a soft dough forms.

Place the oil in another large mixing bowl. Place the dough into it, turning to coat the dough thoroughly with the oil. Cover the bowl with plastic wrap and a dish towel; let rise for 1 hour until doubled.

Punch down dough and place into a greased 9"x13" metal baking pan (the darker the better). Press dough to edges of pan, cover with plastic wrap and a dish towel; let rise for 1 hour until doubled.

Toppings:
Preheat oven to 425F. Spread a very thin layer of the sauce over the dough. 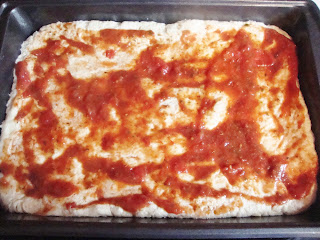 Sprinkle each of the toppings over the sauce, spreading all the way to the edges. Drizzle just a bit more sauce over the toppings. 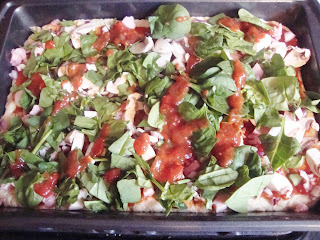 Sprinkle both cheeses over the top of the pizza, all the way to the edges. 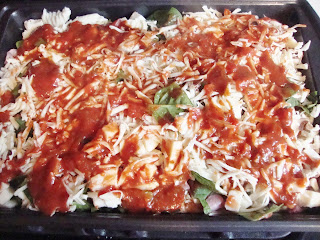 Spread the rest of the sauce over the cheese and mix the sauce and cheese together just a bit.

Bake for 30 minutes until cheese is melted and golden, and edges are caramelized and crisp. Let cool for 5 minutes before cutting.

Oh my word, that pizza looks incredible! I wish I had a few slices right now! I don't know if I've ever had a true Detroit-style pizza, but I sure would not say no if it was offered to me! YUM!!!

'I need, I need...Gimme, Gimme!' lol I had to pin this. Looks fantastic. And I love the edge crispiness. I cut even my homemade round pizza into squares. Drives my son crazy. :-)

I never heard of Detroit pizza, but I think I am converting .... this looks unbelievable :)

That is so thick that I bet one slice will fill ya up, correct? I might give this a go in our grill.

Ooooh, Miss Mary! Love, love, love this! I am definitely giving this a try. We are major pizza fans and enjoy many different styles, but Detroit style will be a first! I'm intrigued by the garlic powder in the crust and those toppings are right up my alley. Yum, yum, yum! Your phots have my mouth watering and my belly talkin' back at me. Pinning it, so that I won't lose track of it! XOXO