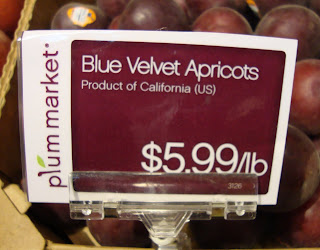 I'm not particularly a fan of David Lynch, though I did love the first season of "Twin Peaks" with all its eccentricity. So, of course, when Tom and I were at an upscale grocery store the other day and found Blue Velvet apricots, my first thought was that kitschy Bobby Vinton song; Tom's, as I'm sure you've already guessed, was the movie.
So I thought about titling this post "She wore blue velvet," since the apricot is, indeed, wearing a blue coat now that it's mated with a plum. But that seemed trite and obvious, so I dug a bit for a quote from the film. And lemme tell ya, THAT took some doing! Most of the lines had -- shall we say? -- considerable vulgarities ... not my style. I'm not offended if the words actually serve the character's purpose (as they do in "Pulp Fiction," for example). But I was not going to post anything on my pretty pink blog that didn't represent me in all my prissy, girly-girl glory!

But anyway ... always a digression, isn't there??? 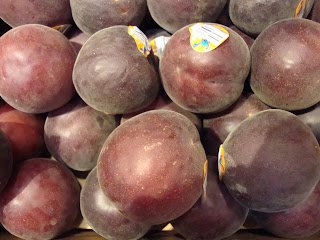 I found the perfect line, spoken by Kyle MacLachlan's character: "Now it's dark." It's been so long since I've seen the movie that I have no clue whatsoever what it refers to ... could be anything, with David Lynch. But it's ideal for this situation: now the apricot is dark.

And it's also sweeter -- more plum flavor than apricot, though before you cut it it clearly looks like an apricot whose fuzz was injected with some ink. Once it's cut, it looks a lot like a plum -- juicier than an apricot, which tends to have a firmer flesh. 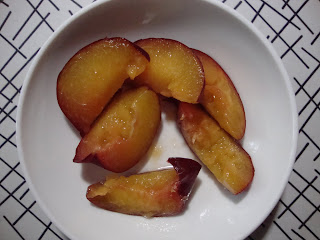 I've eaten several varieties of pluot -- a different cross of plum and apricot: some greenish and mottled, some purple, some red. And they are clearly variations on the theme of plum. This, however, appears to be an apricot that has stopped breathing and turned dark blue as a result, until you delve into the depths and find distinct evidence of plum within.

I always love to find new and intriguing foods, particularly produce. I've eaten yellow carrots and ones that were maroon on the outside and orange in the center ... for the most part, they all tasted like standard carrots.

Tomatoes of all colors -- from red to pink to yellow to green to striped -- are fabulous, each with its own unique fragrance and flavor.

I love multi-colored beets -- traditional deep red, orange, and even pink-and-white ones that are reminiscent of candy canes.

I loathe green peppers (I can eat them if someone puts them into something that they're serving me, but they're too bitter and too overpowering to really be suitable as a food, methinks). But red ones, orange, yellow, and even purple ... these I can go with either sliced and used as dippers, or sauteed, or roasted.

When nutritionists tell us we need to eat colorful food, these beautiful Blue Velvet apricots certainly help in that mission! And they were so good that, if they weren't so wretchedly expensive, I would absolutely buy them again ....

Is this the same as a plumcot? I bought some of those at Hmart two weeks ago, and they are pretty delicious...extremely juicy!

Before I checked my blog reader, I was reading about the birth of a Zedonk and beefalo. Now, plums and apricots sound like a better pairing to me!

I love apricots and right now could sure go for some of those sliced up in a pretty little bowl. Look so yummy!

I saw Blue Velvet in college...some guy I was dating said it was the best movie he had ever seen. Yea, we didn't last too long after that! LOL I'm not a huge apricot fan, but if it's more on the plum flavor, I bet I'd love them. Wonder if I can find any out here.....

I haven't seen these, but they look gorgeous. Now I will look. And Mary, I feel exactly the same way about green bell peppers--they are essentially the only food I refuse to eat, but I love the ripened varieties. They just overpower everything.

I'm a new follower from keepin company Thursday =) Your blog is so adorable!!

Can't say that I have ever eaten a plumcot, but now I want one. And I totally agree with you on green peppers. Totally dislike them. Other peppers not so much... until they get too hot. Love banana peppers. Isn't that funny?

I'd like to try one of these. I wonder if you can get them online anywhere...let me go check amazon. They look yummy yum yum!

FYI: I learned these dark apricots have to be gotten at your local specialty store since they aren't on amazon and don't show up when I google.

You have far too much fun with food! :)

haven't seen those but they look GOOD! My husband and I love pluots!

You're right! At $5.99/pound they are expensive, but now I'm still going to go look for them and buy one. I've never had one of these, but they look good.

I'm in full agreement with the bell pepper comments too. I almost never buy green peppers. I prefer orange, but will take red if I must. Oh, and yellow - yum! :)