Two for Tea ... Two Kinds of Sandwiches, That Is 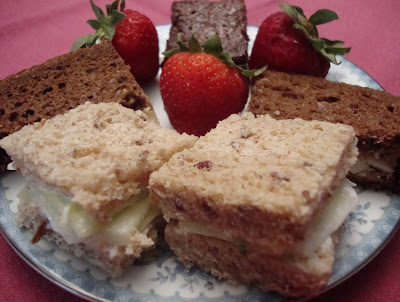 Well, after obsessing about it for several days, on Thursday I finally enjoyed my lunchtime tea presentation ... whew! You know how you get a little bug up your bum about an idea, and you just fixate until it's realized??? That's how I was about the cucumber sandwiches. I heard them calling, and I heard the entire "finger sandwich and cookie" assortment begging for my attention.

So, when you have a craving you have to give in! Otherwise you're tormented. You'll devour all sorts of substitutes -- tossing aside regard for calories and budgets -- hoping to find a passable alternative ... and then you'll ultimately give in and indulge. You might as well have what you want from the beginning.

On Thursdays, my friends/co-workers Beth and Michele are usually the only other ones in the office besides me. Since most of the other folks work weekends, Thursday is a popular day off; Friday is necessary for Saturday and Sunday preparations, after all. We figure that if we're there manning (woman-ing???) the proverbial fort, we might as well enjoy ourselves. So we usually order lunch to be delivered.

But I'd been hearing the Siren song of afternoon tea; and I had cucumbers and egg salad and several varieties of breads ... as well as some fruit ... not to mention an assortment of leftover cookies that were waiting for me in the conference room when I got to work. I decided to bring my lunch on Thursday.

So I took some oat bread and spread it with a bit of butter; this would keep the bit of Ranch dressing I used for flavoring from seeping into the bread.

I spread the dressing over the bread, then lay very thin cucumber slices over the bread. I used a kitchen knife for the cutting rather than a mandoline, because I'm noted for my klutziness and I am convinced -- as is Jeremy -- that I would slice my fingertip off if I ever dared to use a mandoline. The knife worked just fine ... no need for fancy or expensive kitchen toys! 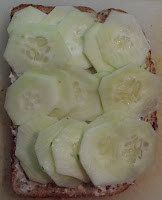 Then I closed up my sandwich, cut off the crusts, and cut it into cute little squares ('cause those New York City deli sandwiches -- despite being foot-high works of art! -- aren't what you want for an afternoon tea.). 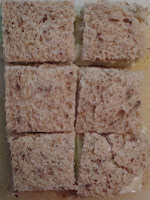 Next on the menu -- since a proper afternoon tea offers trays with variety, not just a plain ol' (but beloved!) pb&j -- was an egg salad sandwich.

My egg salad is very simple: eggs, mayonnaise, Dijon mustard, salt, pepper, and some finely diced red onion. I got the idea for the recipe from the movie "Harvey," starring Jimmy Stewart. The scene is a bit difficult to explain, as it comes in one of the screwiest parts of the screwball comedy; but suffice it to say that Jimmy Stewart's niece in the movie, Myrtle Mae, offers to make an egg 'n' onion sandwich for the sanitarium worker she's flirting with despite his having come to the house to retrieve her mother who was wrongly committed and managed to escape. (Go watch the movie -- it's cute, it's sweet, it's fun!)

Anyway .... I like to use an egg slicer on the eggs, slicing them first horizontally and then turning the egg and slicing it cross-wise; this makes lovely little shreds of egg, rather than chopped and mashed egg. I then spread this onto pumpernickel bread, but you could use a caraway rye as well. (And while it may contain rye flour and thus technically be "rye" bread, a proper rye must have caraway seeds!!! I have spoken.)

Close the sandwiches, cut them into quarters, and you have more pretty little finger sandwiches waiting for you. Truly, it doesn't get much easier than this .... 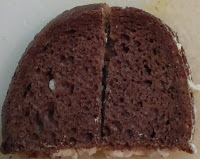 So, I packed up my sandwiches, placed some strawberries and blueberries into a container, and meandered off to work. Beth ordered a rich macaroni and cheese for lunch, Michele ordered mozzarella sticks and a slice of carrot cake, and I joined in by ordering some raspberry iced tea to complete my array. Finger sandwiches? Yup. Fruit? Yup. Cookie ... oh, alright, since I already admitted it in Thursday's post, cookieS? Yup. And then finally, iced tea? Yay!!!

And it was an absolutely lovely lunch, if I may say so myself! Simple, easy, cool, light ... it was everything I needed and had been craving, even if we ate at 1 p.m. rather than the standard tea time of 4 ....

I never knew how to make them little sandwichies now I want some too. That rasberry tea sounds really good too. Tea time sounds like a great lunch. Thanks for sharing.

I cannot even express how much I LOVE cucumber sandwiches. There was a time when I was a teen that I nearly lived off of them. And now I am craving one. One of my favorites!

Oh what is better than tea sandwiches??? Granted I always want to eat about 100 of them, but still!

Since I only shop for food twice a month, I often find myself having to wait a week or two before satisfying my cravings, but I always, ALWAYS do. I figure that if I've been waiting that long for a food item, I must really want it, so I go ahead and have it. Usually it's healthy anyway. Usually. ;)

YUM!!!! I love egg salad!! I haven't actually had it in a while but my mouth is watering just reading your post!! These sandwiches are so cute and now I have the urgency to make little tea sandwiches too!!! :D

I hope you don't mind, but I'm going to invite myself over for lunch and afternoon tea!! Yum...I know the sandwiches are good... I love cucumber, I love egg salad... I'm sold!!

That looks so good and sounds like so much fun! I had an egg salad wrap with cucumbers last week for lunch that was divine!

I've gotta make cucumber sandwiches. I love them, but don't think to make them very often.

When I was a kid, there was this stuff called Cheese Whiz. My grandma used to make 'open face' sandwiches using dark rye bread spread with Cheese Whiz, then she would slice green olives with pimento and cover the entire top with the olive slices. They were pretty and I LOVE (and LOVED) olives. :-) I thought those sandwiches were the most amazing things. :-)

I just love the image of tea and tiny lady like sandwiches. Somehow it's seems so civilized and nothing makes a tea time complete like a dainty cucumber sandwich. It's just lovely! Now I have to rethink the brontosaurus burger I was going to have for dinner :)

I love the sandwiches and will try them for a candle party I am hosting.
I am a tea junkie and always looking for something new to have with my favorite drink.
Have a great week just stopped by to say hello.

What a great idea. I love the idea of little sandwiches at work. It would make lunch...special.

What a great lunch! Way to go! You are so correct with the rye bread! I'm new here and know I will be returning to see what's going on!

Yum! I love this idea. Now I'm trying to think of an excuse to do it for myself! :)

I'm your newest follower from Tag Along Tuesday!

Ohh, I wish I had been there for lunch! It sounds wonderful. Thanks for visiting me! Come back anytime for a slice of cake! Now, I'm off to find a cucumber.....

Yum! Your sandwiches look so good! I love both cucumber and egg salad! Thank you for sharing and thanks for joining me for tea. Until next time, have a delightful evening.

I'm so glad all of you joined me for my afternoon tea luncheon!!! Olive sandwiches, cake, egg salad WITH cucumber ... what a lovely time we've had ... :)

Hi! I am a new follower from welcomeWednesday!