Yet Another Perfect Summer Lunch (If I May Say So Myself!) 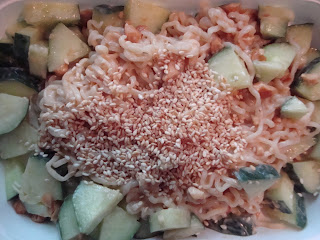 It's a good thing I like cucumbers, since I'd had no idea they were so prolific and therefore rashly planted 6 seedlings in my plot in the community garden at my condo complex!

I've found several ripe ones already, with dozens and dozens of little yellow flowers telling me that I have the potential to be the pariah doling out extra cucumbers (at least it's not the dreaded zucchini!) for the rest of the summer. Good thing Tom is a bleeding heart (just one more thing to love about him!) who works with the homeless and the mentally ill, who can always use some free vegetables and a dose of nutrition; I know that the bounty will be accepted happily at his office.
As is often the case, I found myself with an odd little notion of an idea about how to put at least one of these cucumbers to use, and set about trying to realize it. Sometimes these fragments don't form a cohesive whole when I try to make them happen; other times, as with this recipe, it was serendipitous from the start. Who needs Rachael Ray and her 30-minute meals, when I made this in only 5 minutes or so??? This was truly one of the best lunches I've brought to work; and not only can it be made with astounding speed, but it's downright cheap, too -- though not tawdry!
I know the following instructions for the sauce are really kinda vague, but I was cooking and stirring while already running late for work. Scoop out the last blob of peanut butter from the jar ... taste and find out that the sauce needs a little more oomph .... Essentially, I just dribbled and drizzled until I got something I liked!

Cook noodles according to package directions; drain, then rinse under cold water until cool.

In a medium-sized bowl, stir together the peanut butter, lemon juice, chili sauce and red pepper flakes. Slowly dribble in a bit of coconut milk and stir it in; keep doing this until the mixture is the consistency of pudding. 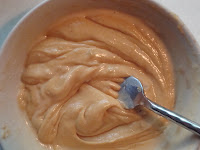 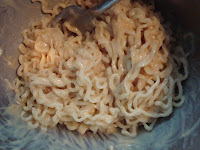 Place the noodles onto a plate, then top with cucumber pieces and peanuts. 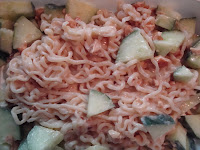 Sprinkle the sesame seeds over everything. Serves 2.

I love peanut sauce...mmmmmm.. and cucumbers too! I wish I lived closer to you, I would take a few off your hands!!

Sounds delicious!! I've got to try it. I love Ramen noodles, but the seasoning is deadly poison to me, so I'd pitch it rather than save it. Great idea. I need another picnic lunch. :-)

I love cucumbers! I LOVE thai food! What an easy recipe! Looks yummy!

This looks really good!! Stopping over from NFF. Love your blog name!!

Oh, Mary, Mary, Mary! This looks so good! I'm going to send my readers to it! Thanks so much.

And, for that dreaded zucchini, check out my blog from Tuesday for a healthy and tasty recipe! I think it could stand to be a little more moist, but all others thought it was perfect as is. What do you suggest for more moisture (you know, because I want to please me!). I know if I used the pineapple it would be more moist, but any ideas if you don't use it?

I'm your newest blog follower thanks to one of the Friday Blog Hops!!! Your recipes look delish!!! Come on over and link up a recipe under my RECIPE TAB!

Your blog is beautiful! The food and recipes look amazing.

Stopping by via Follow Friday 40 and Over and happy to be your newest follower.
www.maureenmakesit.com