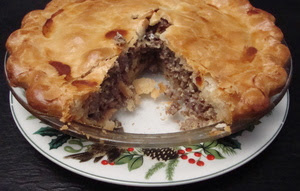 I'm a mutt: Austrian and Irish on my father's side, and Scottish, French and Canadian on my mother's.

Sometimes I think I must be related to half of Canada. My maternal grandfather's family can be traced to the late 17th century, when the first ancestor left France and set foot on this side of the Atlantic. For generation after generation, it shows that virtually every surviving male married, fathered perhaps 16 children, remarried after his wife died, and had another 13 or so children with his second wife. I violated the tradition by having only one child!

But I continue the French Canadian tradition of serving pork pie - known as Tourtière [tohr-tee-AIR] - on Christmas Eve.

Yes, I also eat Chinese food on Christmas Eve like every good Jewish person who's not celebrating the big holiday (even though I do still put up a tree and exchange gifts with loved ones). But everyone knows I'm always here for the food; enjoying two wildly different cuisines just makes things more fun!

This is not a family recipe handed down through the decades, but rather one I've cobbled together myself. My mother's version had great flavor; but the meat was very loose and fell out of the crust, which is typical of every other recipe I've seen for this classic dish. So in addition to tweaking the filling by combining both pork and sausage, I've also added egg to bind everything together.

I'm sharing this with you a bit early because you need to make the filling and chill it before placing it into the pie crust and baking it. According to lore, wives' tales, or whatever else you'd like to call it, the pie is also best if made, frozen, and then reheated. I'm not usually efficient enough to do that, and this pork pie is still a family favorite ... start your preparations a day ahead, serve it for Christmas Eve, and you'll love it anyway!

In a large saucepan, combine the sausage and the pork; brown the meat, breaking it up as it cooks. Add the onion, cinnamon, cloves, nutmeg, salt, pepper, and seasoning; cook until the onion is translucent, stirring frequently. Add the bay leaves and the chicken stock; bring to a boil and cook for 20 minutes or so, stirring occasionally, until the liquid has been absorbed. Place filling into a bowl, cover, and refrigerate until cold.

Stir the 2 eggs into the pork filling, then spoon filling into the pie dish. Cover with the remaining crust, crimp edges, and cut slits into the top.

Beat the egg yolk with the water and brush the egg wash over the pie.

Bake for 10 minutes, then lower heat to 350F. Bake for 40-45 more minutes until the pie is golden. Let the pie rest for 10 minutes before cutting.

OMG pork in a pie crust? Where have you been all my life???

I love traditional foods like this. This is kind of a cross between a steak and ale pie and a meat pies that I love so much. I can't wait to give this version a try. Happy holidays Mary!

I like the sound of the French name. This sounds a little like pork with Five Spice Powder, at least having a couple of the spices in common. And in a crust!

Yea for the French Canadians. My paternal grandmother was a French Canadian - a Gillette. (her family - maybe in an attempt to Americanize it? - pronounced it JILL.it.) Maybe we're cousins!! lol

One of my unblogged posts from the last month was Tortiere! I had never made it before; but, as you mentioned, all of the meat fell out of the crust. It didn't affect the taste at all; but the presentation in the photos was not so wonderful. This looks delicious, Mary. I love your recipe and look forward to giving it a try.

Looks like a very delicious pie!
Nice finding you!
Visit me at: my-greek-cooking.blogspot.com

I think I could eat that whole thing! Okay, maybe not in one sitting, but lord that looks great.

I've never had anything like this and it sounds amazing. Thanks for sharing. Mona

I have an apple pie recipe that this would be fabulous with. I usually just use s jar sauce. This would be so much better. Mona

A fun combination of Christmas Eve food at your house.

Hopping over from the Christmas in July blog hop - #57.

Oh, Mary! As always, you're a girl after my own heart. Succulent pork and flaky pie crust; all together in one delicious mouthful! Really... Does it get any better than that? Thank you so much for linking up with the party! It's wonderful foodie friends like you, that helped to make it so much fun! :~) Mary