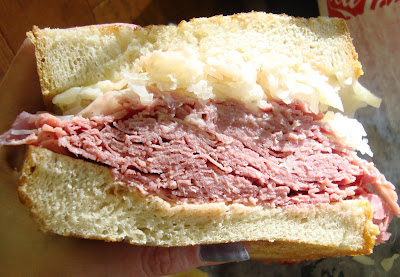 Ever since we watched the "Man v. Food" episode in which host Adam Richman visited Ann Arbor, Jeremy has wanted to try the fabulous Reuben that was featured. So we recently headed down to the Maize and Blue Deli, today's Frugal Floozie Friday feature, to indulge in a hearty lunch.

Because my brain is a sieve and I couldn't remember which of the seven - yes, seven! - Reuben varieties we were supposed to pay homage to, we ordered the classic Coach's Reuben: "corned beef, Switzerland Swiss, sauerkraut and Russian dressing on grilled sourdough rye." It only cost $8.25, well within our mandatory $5 per person (or less) budget since we planned to share the sandwich.

The menu is extensive, and the deli was packed on the afternoon we visited; but the service was unbelievably friendly and welcoming, and our sandwich was made very quickly and brought to our table ... the last two seats available, which Jeremy had nabbed as I placed the order.

The Reuben was very generous, but thankfully could still be held and eaten without the contents spilling everywhere. The corned beef was sliced to shaved-thin perfection, and there was a perfect balance of meat to sauerkraut and dressing - proportions matter greatly in this sandwich, after all. (Too much dressing makes it slippery, too much sauerkraut overpowers the tender meat.) And the bread was lightly toasted, leaving it still tender within its crisp exterior.

If he hadn't been on a Frugal Floozie excursion with me, Jeremy would certainly have eaten the entire sandwich himself - 20-year-old males are the secret weapon for someone who is immersed in food in order to write about new recipes and restaurants on a continual basis! But he also told me that the half-sandwich was actually very filling. We'd planned to spend the rest of the afternoon trolling our way through downtown in search of future Friday posts, but it was quite some time before either of us could manage to think about eating again.

There are lots of great sandwiches and other goodies at the Maize and Blue Deli, and the sandwiches are so large that they can easily be shared without going over the $5 Frugal Floozie Friday budget and without going hungry. And isn't this the best time to go, while all the students are away from campus for vacation???

I saw that episode of Man Vs Food.. the Ruben looked amazing.. and obviously, it wasn't lying! lol

Looks like a wonderful sandwich! Kevin and I usually share an entre or a sandwich. It makes so much 'cents.'

Visiting with you over a cup of coffee sounds amazing; but, we must visit over a Reuben, as well.

What a sandwich! Looks like it could be competition for some NY deli's. I love reading about your $5 challenges!