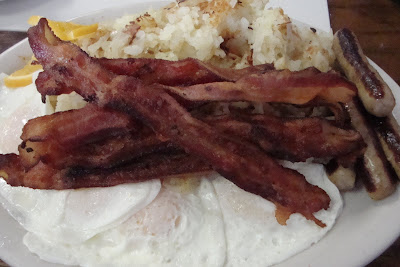 It's Frugal Floozie Friday, and today's feature offers the most gargantuan quantity of food yet for our measly budget of $5 per person! What you see in the photo is the infamous Bomber Breakfast, found only at the Bomber restaurant.

Jeremy recently had an early morning appointment, and his dad, Stuart, and I went along with him. Afterwards, we decided we could use some breakfast; and so we ended up at this Ypsilanti institution:

"The Bomber opened in 1936 as Baldwin's Diner. In the 1940s the name was changed to the Bomber, only to be discarded in favor of Bob's Barbecue in the mid-1970s. Finally in 1986, the name Bomber returned and the current owners John Sebestyen and Johanna McCoy purchased it in 1995". 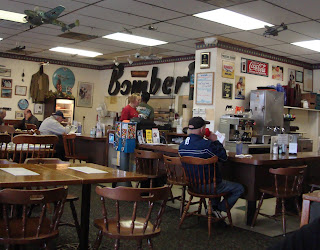 The restaurant is noted for the historical artifacts linings its walls - everything from uniforms to posters to autographed photos to rifles - not to mention the 24 model airplanes which hang from the ceiling. It is also noted for friendly service, generous portions, and the kind of atmosphere that encourages eating, reading the paper, having just a little bit more coffee, chatting with other customers, and making oneself at home.

The signature dish - the Bomber Breakfast - is so enormous that it was once featured on the Food Network's "Top Five Overindulgences" show. There is enough food, truly, to feed a family of four: a pound of hash browns with cheese and onions, 2 full slices of toast, 4 eggs any style, and a choice of 6 sausage patties or 7 sausage links or 10 slices of bacon or 2 slices of ham. (Our waitress told us, upon seeing our eyes glaze over, that we could mix-'n'-match if we wanted to.)

So, how much does this platter full of food cost?

And since Stuart and I split it - though we couldn't finish it, despite valiant efforts! - it came in at under our mandatory $5 per person limit. 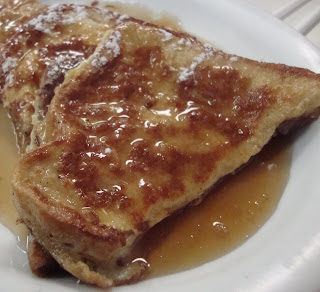 As though this wasn't enough indulgence, Jeremy ordered an obscenely rich and decadent breakfast for himself: Chocolate Hazelnut French Toast. A half order - 2 portions of thick bread filled with luscious Nutella, dipped in batter and drenched in syrup - costs only $4.95.

The Bomber also features weekday breakfast specials for $4.50, featuring everything from traditional pancakes and eggs and oatmeal to breakfast sandwiches. There are many items on the menu which could qualify for our Frugal Floozie Friday mission.

The Bomber is a great place to go for a hearty breakfast or lunch, and is easily a place where you could become a regular.

I'm sorry, what were you saying? I sort of got lost in the bacon picture... and then you said chocolate hazelnut french toast... mmmmmmm!!!!

I love the look of that dining room! Everything's becoming more homogenized in this country, and it's fun to find something unique. Kevin would love to eat that 'full English breakfast' you pictured! And I suspect that we've been wrong about it all these years, calling it a heart attack on a plate. I suspect that many of us get less protein and more grains than we really need. IMHO, of course. :-)

I want to move closer to that place. Do they have mail order?

I love old established places like this. My dad was a total "diner connaisseur" and he knew hundreds of little gems like this one all over New England. We'd go for Sunday drives and almost always stop at one for breakfast or lunch.

Ya gotta love a place where you can share an order and still leave with a doggy bag! :~)